Although we are bullish on Monero, based on the fundamental and technical analysis, we remain prudent in our prediction. We expect the pair to range between $360 and $400 as of the close of 2022. In 2023, XMR could close at $950 and rise above $1,000 in the next three years.

Recent Changes in the Monero Price

Monero XMR began the last quarter of 2021 in a consolidation pattern. XMR/USD traded in a range between $255 and $291 from October 1 to November 14. Between November 15 and 19, XMR/USD plummeted from $275 to $225, losing 22% in 4 days. Further downward pressure took the price all the way down to $184. At the time of writing, XMR/USD was trading at $196. Monero is now ranked as the 45th-largest cryptocurrency, with a market capitalization of $3 billion.

Monero is a private, decentralized cryptocurrency protocol aimed at confidentiality and security. The protocol was launched in 2014 and differs from other blockchain networks, like Bitcoin, in its anonymity technology, where transactions cannot be traced back to their initial sources. Monero conceals the sender and the recipient’s information by leveraging advanced cryptography. The network was created as a fork of Bytecoin, a decentralized protocol launched in 2012. There were no pre-mined Monero tokens and none allocated to the development teams. Monero awards all the block rewards to the miners, who validate the transactions to secure the network.

The protocol uses RandomX, an ASIC-resistant and CPU-ideal Proof-of-Work consensus model that was developed by its team. The algorithm eliminates the use of only specific mining hardware to curb monopoly in mining. The platform makes it easy for miners to use average computing power.

Monero ensures that incentives to mine the cryptocurrency remain; the emission curve is infinite. The curve is made up of the main and tail curve emissions. The latter starts after 18 million tokens have been mined, and its reward is less than 1% inflation that decreases over time. The network speed is 2 minutes block generation, and there is no capped limit on the block size. In its place, Monero applies a block reward penalty and the block size to enhance scalability.

The Monero network aims to achieve the highest possible decentralization level, based on a trustless protocol. Obfuscation is achieved in the Monero ecosystem through ring signatures, where the previous transaction output is retrieved from the past transactions, and no one can tell who signed the transaction.

The supply and demand of Monero will largely affect its price. Currently, 18,043,131.75 XMR tokens are circulating, and there is no maximum supply limit. As the mining activity leads to an increase in the supply of XMR, we could see a price reduction.

As the Monero infrastructure grows, we expect to see an increase in its use cases and increasing adoption. The launch of Dandelion ++ in 2020 improved Monero’s transaction speeds. The network also has plans for a second layer solution to boost scalability. As the platform continues to roll out upgrades for better efficiency, adoption could grow, and the price would follow suit.

Monero’s use as a confidential token occupies a special niche in blockchain technology. This is a strong selling point for the Monero network. As blockchain technology gains more adopters, and investors and developers look for a network that supports anonymity, XMR could get a price boost.

The inflation rate has remained high in many jurisdictions, due to the Covid-19 pandemic. As a result, investors have moved towards searching for safe financial havens. Unlike the fiat currencies that the governments can print, no single authority can increase crypto tokens. With the rise in inflation and an increase in cryptocurrency investors we could see an increase in the price of Monero.

Many jurisdictions around the world are pondering on how to regulate the cryptocurrency space. Countries like China have banned privately owned cryptocurrencies and mining activities. Such moves that affect the use of digital assets could lead to a drop in the price of Monero.

Many cryptocurrency exchanges have lost millions of dollars in the recent past, through malicious hacking. Bitmart exchange is the latest victim – they suffered $200 million in losses, in a security breach that was caused by leaked security keys. In the event of a security violation in the exchanges, millions in liquidations occur, affecting digital asset prices.

Blockchain technology has continued to attract better networks, leveraging the Proof-of-Stake to boost scalability with lower transaction costs. Since the advancement of blockchain protocol affects the price of the native tokens, XMR could trade at a lower price in the future, as competition intensifies.

The first half of 2021 was a bullish moment for Monero (XMR). Trading at just $131 on the first day of the year, XMR/USD surged to a high of around $518 on May 7. That’s a huge achievement for a token that remained subdued below $200 before the start of the year. However, XMR/USD has since failed to replicate these gains, falling back to about $184 on May 19, before attempting a recovery, but always trading below a descending trendline. Now, XMR/USD is bracing for a potential breakout, as it is currently holding at a key support level, via the descending trendline, as shown in the chart below: 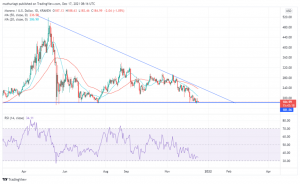 XMR/USD Contained in a Descending Triangle, RSI in the Oversold Region

Looking at the daily chart above, XMR/USD is clearly entering the oversold region from the Relative Strength Index (RSI) reading of 34. The cryptocurrency sits at an established support of $185, but below a descending trendline. The 50-moving average (red) and the 20-moving average (blue) provide resistance to the upside, which suggests that short-term consolidation is imminent. A consolidation at the key support could allow the moving averages to approach or join support in the event of a breakout to the upside. However, there is no price action signal pointing to either a bear or bull market in the next days or weeks of trading, but XMR/USD is approaching a breakout zone between the support and the descending trendline, suggesting that we should keep an eye on the direction of the trend in the next few days. A break above the descending trendline could usher in a new bullish momentum for XMR/USD, potentially at the beginning of 2022. A break below the support will expose XMR/USD to further weaknesses, with $130 as the next potential zone. However, with the RSI pointing to an oversold level and the pair holding firm at the key support of $185, XMR/USD has a chance to break out to the upside.

Monero (XMR/USD) at Key Make-or-Break Level on the Monthly Chart – Will the Pattern Repeat Itself?

XMR/USD appears to be under pressure when looking at the monthly chart. Although the token remains supported at the key support of $185, it has been on a losing streak, with the 20 and 50 moving averages above the current price. Both moving averages could offer resistance in both the short and medium-term. 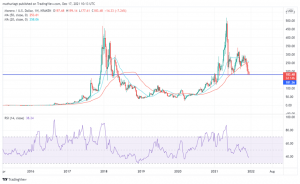 Besides this, XMR/USD is exhibiting similar price signals to those seen in May 2018, when it plunged below $185. Although we cannot predict with accuracy whether the token will repeat the pattern of 2018 and fall below $185, it is still a possibility that the price could continue its current weakness. Based on the monthly chart and further price behavior on the daily chart, $185 will be a key level to watch for the next move in XMR/USD. The level now holds as a key make-or-break point, and if the price breaks below this, we can expect it to move down, until around $150.