Aluminum Price Forecast Q4 2020: The Price Increases in Line with the Chinese Demand

Like most commodities, aluminum, which is heavily used almost in every sector, such as automotive, aviation, energy, modern construction, food and beverages and many other industries, was on a decline from the beginning of the last decade until 2016. Aluminum futures MALTRC1 declined from the all-time high, just below $ 2,800 to $ 1,430, which means it lost half its value, as the global economy was in trouble, and also because of the Greek/Eurozone debt crisis back then.

We saw a decent comeback from 2016 until 2018, as the global economy recovered, but the trade war between the US and China, after Donald Trump came to power, led to a declining demand from China, which is a major user of aluminum. The decline accelerated in the first months of this year, after the coronavirus pandemic hit China, before spreading to the West, resulting in the lockdowns that sent the global economy into recession. But, with China up and running again, the demand for aluminum has increased, turning the price pretty bullish since May.

Recent Changes in the Aluminum Price

Aluminum, like any other commodity, is heavily affected by the risk sentiment in financial markets. If the sentiment is positive, investors feel like taking bigger risks, which benefits commodities. The fundamentals, like the global economy and the Chinese economy in particular, due to the massive amounts of aluminum it uses in the industry and manufacturing sectors, play a big role in the demand side of this commodity, as well as having an impact on the investor sentiment. China has rebounded well after the coronavirus problems in Q1, and the technicals also point higher for aluminum, after they rebounded off the previous support zone at $ 1,430.

Aluminum Price Prediction for the Next 5 Years

The Chinese demand for aluminum was slowing during the trade war, leading to lower prices, and in Q1 of this year, the coronavirus broke out in China, leading to lockdowns in certain parts of the country, and later, the whole world followed. This affected the supply, which went through a glut period, but the decline in demand was much larger. Aluminum prices have already been declining since 2018, as the trade war between the US and China hurt Chinese manufacturing.


But, the first few months of 2020 were horrible for all markets, as we saw commodities crashing lower. Aluminum futures MALTRC1 accelerated the decline, particularly in March, but then the Chinese economy began a strong rebound, which is getting stronger. The production has increased, both in China and elsewhere; according to the World Bureau of Metal Statistics, the global aluminum market reached a surplus of 1,603 kt from January to September 2020, on top of the 480 kt surplus in 2019.

But, the increase in demand has outpaced the increase in production, particularly in China. Despite the service sector heading into another recession in the winter of 2020-21, manufacturing is holding up well, so the demand for aluminum will remain high. That’s particularly true with the output down in the Middle East and Europe, as well as North American production achieving all the catch-up it is likely to achieve. This should keep the price bullish for the time being.

Technical Analysis – The Trend has Turned Bullish for Aluminum in 2020 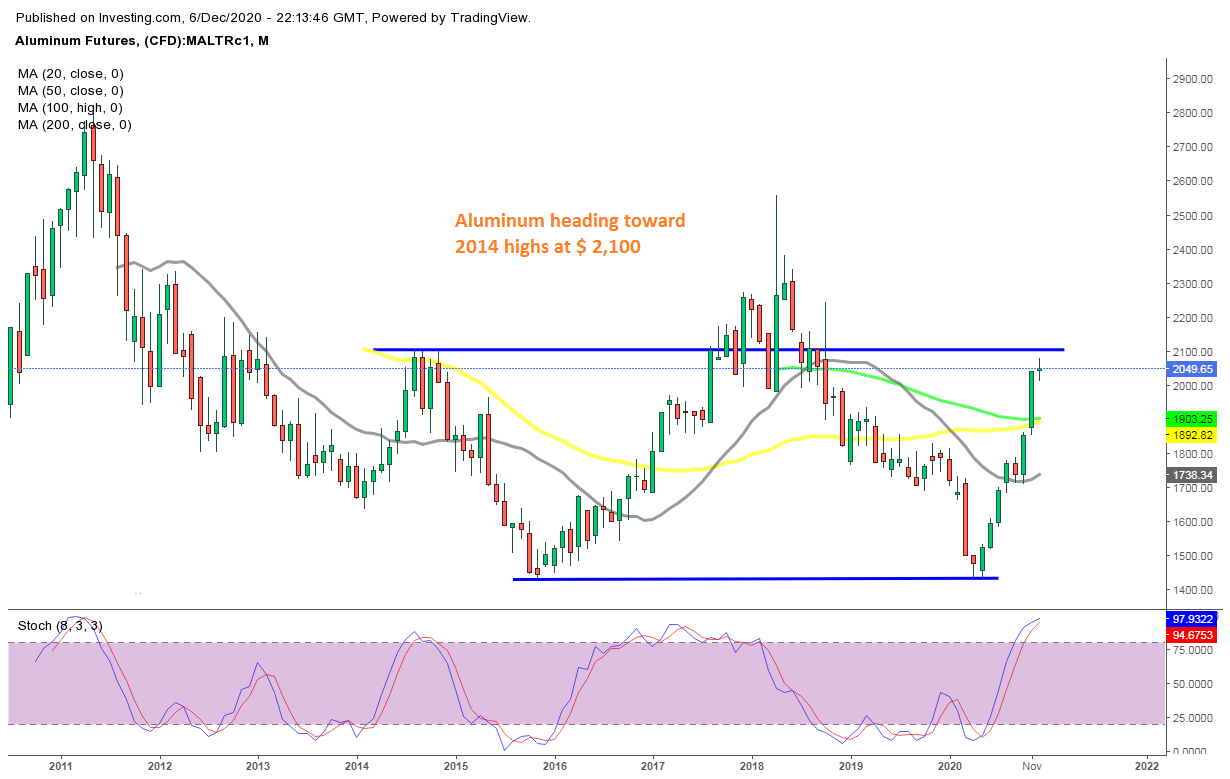 Moving averages have been really good indicators in showing the trend in aluminium futures. Before 2014, the 20 SMA (gray) and the 50 SMA (yellow) were doing a great job in providing support, as the price was increasing, then they turned into resistance as the price turned bearish. The decline ended at $ 1,430s, as mentioned above, and from the beginning of 2016 until April 2018, aluminum turned quite bullish. The same moving averages turned into support, pushing the price higher. The price reached $ 1,550s, but then reversed down at the start of the trade war between the US and China. The MAs turned into resistance again, but the decline ended at the previous low, which means that the area around $ 1,430 has turned into support. Now the price has climbed above all moving averages, which means that the bullish trend is on again, but it is facing the high from back in 2015, at $ 2,100. 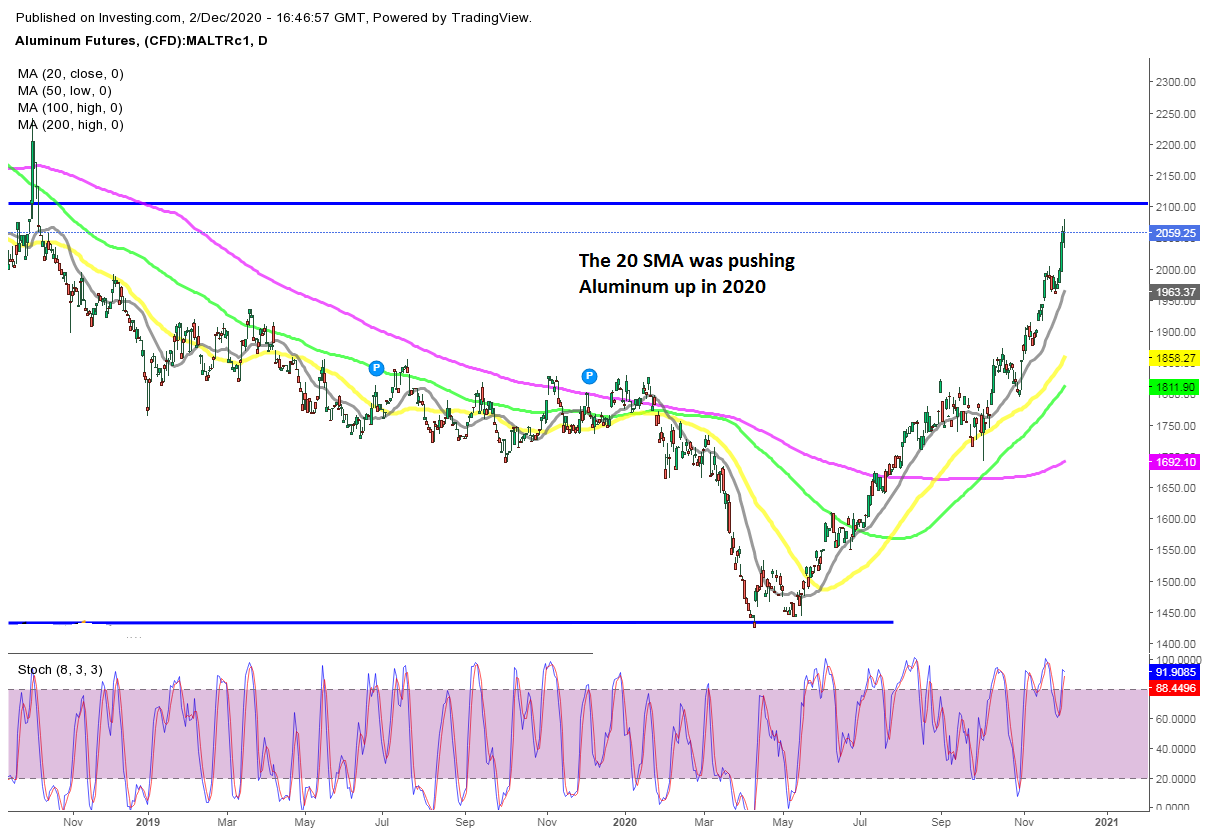 MAs have turned form resistance into support since May

On the daily chart, the picture is similar, with the aluminum price being bearish in 2019, getting pushed down by moving averages, while in 2020 the MAs have turned into support, which means that the trend has been bullish. The 50 SMA held the deeper pullback in September, while the 20 SMA has been pushing the price higher all the time. The trend is only picking up pace, as the 20 SMA indicates, so further bullish momentum is expected, especially when Biden takes office in the US, as this could mean that the trade war might come to an end or at least to a standstill.