USD/BRL Price Forecast For 2021: Stimulus Not Helping the Real, What Next?

The Brazilian real is not finding peace, as it keeps declining, sending USD/BRL higher since the middle of December. In our previous forecast for this pair back in November last year, the Brazilian Real was gaining some confidence against the US dollar, but that didn’t last too long and in December, the decline resumed again and USD/BRL turned bullish again, after bouncing off one of the moving averages on the weekly chart. That looks particularly bad at a time when the US dollar has also been quite vulnerable, showing that the BRL is even more vulnerable.

Both currencies in this pair have been subject to high volatility in 2020, as we explained  in the USD/BRL price forecast for Q4 of 2020 and the volatility has continued in 2021. The US Dollar has been massively affected by the coronavirus outbreak at first in spring last year and then the second wave of the virus and the new restrictions in the West.

The Brazilian Real is more prone to the risk sentiment. That’s the reason for the big surge early this year in USD/BRL. Brazil is also a major exporter of commodities, which have been increasing in recent months, yet the BRL has been declining. The trade surplus of Brazil should have been a positive factor for the Real, but as it is the case with other emerging markets, a higher inflow of foreign currency doesn’t help the home currency much.

Recent Changes in the USD/BRL Price

The USD side of this pair has been volatile in the last year, for a number of reasons, which have been political, economical and medical. Brazil on the other hand is one of the BRIC emerging economies and as such, its currency has been on a constant decline, comparable to the decline in the Russian Ruble or the Indian Rupee. USD/BRL was trading at around $ 1.50 a decade ago, but in May this year it reached $ 6, after surging $ 2 in the first several months of this year, as increasing global tensions and the COVID-19 situation turned the sentiment massively negative.

Risk sentiment took a big hit, sending emerging market currencies diving lower. The risk sentiment improved somewhat during summer and this pair retreated lower below $ 5, but buyers have come back into play and the price in USD/BRL is heading back up for $ 6, so we think that we will see record highs again in USD/BRL.

USD/BRL Price Prediction for the Next 5 Years

More Economic Stimulus on the Way for Brazil and the US

The economic stimulus packages to help fight the negative effects of the coronavirus pandemic have reached astronomical levels all over the world. The US alone has spent more than $ 3.5 trillion so far and is planning to spend even more now that the bill worth $ 1.9 trillion has been signed into law by President Biden.

There have been four to date, with the CARES Act being the most recognized coronavirus relief bill, not including President Trump’s executive actions:

Although, there has been criticism about the way that the money has been distributed. There have been tax breaks for big businesses which haven’t needed it and have laid off employees. The new stimulus package has funds allocated to people and industries in difficulties, such as tourism, which includes $25 billion to restaurants struggling from pandemic lockdowns and closures, and $1.25 billion for venue operators. The package will also provide another $14 billion for airlines and payments of $ 1,400 for individuals.

The spending in Brazil has also been huge in relative terms, because it doesn’t compare to the US. They started with the president of Brazil Jair Bolsonaro signing off a $ 30 billion bill in March last year, which soon increased to $ 236 billion. Brazil’s senate backed a $7.8 billion round of Covid aid for the poor earlier in March 2021. The plan approved by the senate allows the government to take on debt to finance four monthly payments of 250 Real (around $ 45) to some 40 million Brazilians at a cost of 44 billion Real (around $ 7.8 billion). Last year, the government spent 322 billion Real on a more generous program that benefited over 60 million Brazilians with stipends of as much as 600 Real per month. The real jumped on the news, but it couldn’t keep the positive momentum for too long and it has turned bearish again, sending USD/BRL higher.

All economies around the globe took a major hit during the coronavirus lockdown months and emerging markets were most vulnerable, since they are sensitive to risk sentiment, as cash flows out of these countries in difficult times. Hence the surge from around 4 at the beginning of the year to 6 until May. The US economy has been recovering well since the reopening in May and it continues to broaden the recovery, as fundamentals have shown, which is the reason for the bullish trend in USD/BRL since the middle of June, while the USD has been quite bearish against other currencies from non-emerging markets.

So, the situation for the emerging markets doesn’t look good, especially now that the coronavirus restrictions are increasing again and in many places we are seeing more lockdowns. This is hurting the risk sentiment again in financial markets, which should weaken emerging market currencies further. The central bank of Brazil BCB cut its benchmark interest rate by 25 basis points to a record-low 2.00% in August, saying that they can’t do much more with monetary easing. That sounds positive for the BRL in the short term, since they won’t ease again anytime soon, but they also are very limited in what further steps they can take to fight another economic downturn due to lockdown 2.0. The US presidential election week was quite bearish for the USD, with all the risks associated with these particular one. But once the uncertainty is over, USD/BRL will resume the bullish trend again.

US and Brazilian Economies

The Brazilian economy dived into recession in Q1 and Q2 of last year, as most of the world, but recovered well in Q3. In Q4 the growth has slowed, but it still remains positive, with all sectors of the economy in expansion. According to national statistics bureau IBGE, the economy of Brazil shrank by 4.1% in 2021. The number was much better than originally anticipated, despite this being the worst annual growth on record, as economists were forecasting an 8% contraction. Brazil closed the year with a 3.2% in the fourth quarter, which helped the 2020 GDP number nonetheless, while projections for this year are for a 2.5% economic expansion. The US economy, on the other hand, is expanding at full speed and more economic stimulus worth $ 1.9 trillion is on the way, which will help things further.

Limited Room for Support in Brazil

Although, one of the downsides is that the government of Brazil has limited room to support the economy through the fiscal and monetary policies, as well as through social programs. In 2020, the government of the country authorized a monthly payment of 600 Real ($ 105) for informal workers, who were among those worst affected by the restrictions. But the country’s debt was already high and the spending increased it even further. This year, a new round of the aid programme is expected to be put in place, but is likely to be much smaller and more limited than last year’s programmes, providing just 250 Real per month, which will only last for four months, beginning this month. The bill which was approved by the Brazilian Senate allows the government to borrow further in order to finance four monthly payments of 250 Real for around 40 million Brazilians which accounts for 44 billion Real or around $ 8 billion. The new bill was positive news for the Brazilian Real, but the optimism didn’t last too long and the decline resumed, pushing USD/BRL ever higher, towards last year’s record highs.

Technical Analysis – Will MAs Hold As Support For USD/BRL? 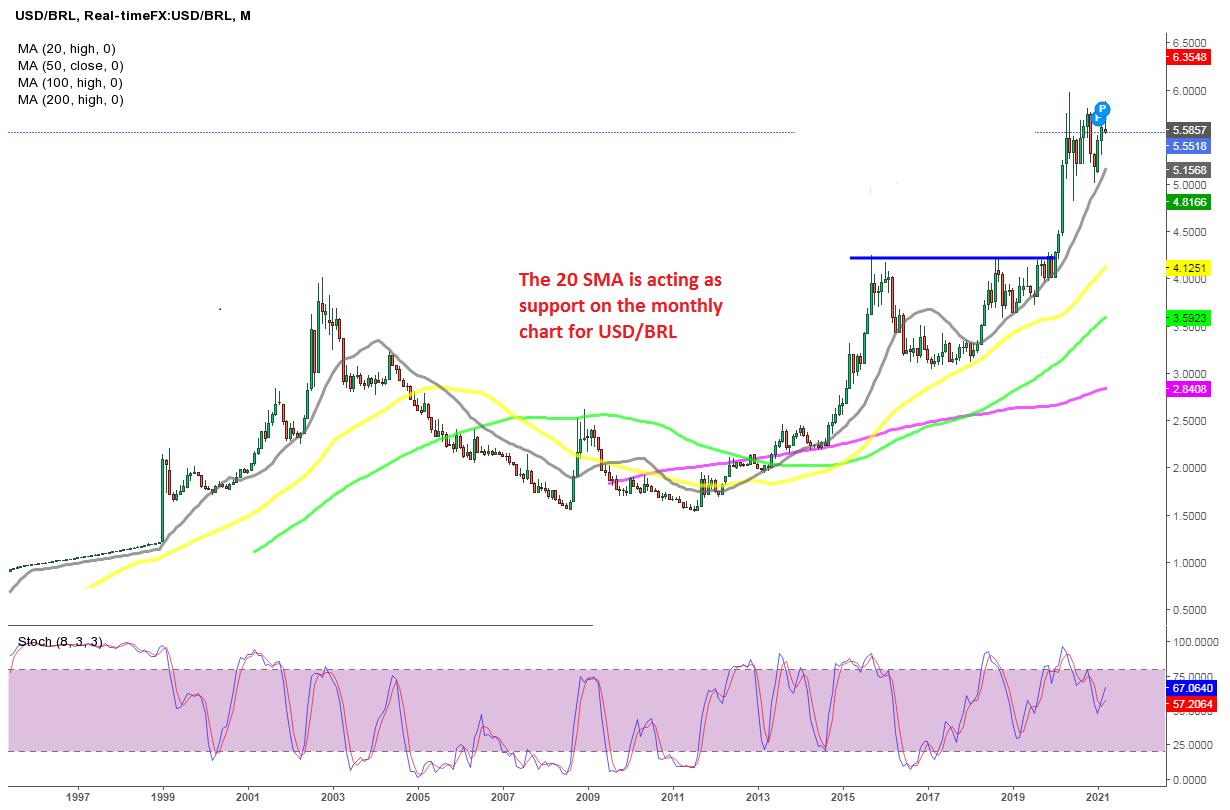 USD/BRL was trading below parity in the 1990s, but jumped above 2 in 1999 during the crisis in Japan and emerging markets. The surge continued until 2002, as this pair reached 4, being supported by the 20 SMA (grey) on the monthly chart. From 2002 until the global financial crisis GFC in 2008, the trend turned bearish for USD/BRL and the 20 SMA turned from support to resistance. During the GFC we saw a jump from 1.50 to around 2.50, but the 100 SMA stopped the surge and the price retreated back down to 1.50s, where this pair has formed a support zone. Since 2011 though, this pair has been bullish, partly due to the USD which has been increasing and partly due to the decline in all emerging market currencies. Moving averages turned into support after being broken, with the 50 SMA (yellow) and then the 20 SMA when the trend started to pick up pace. 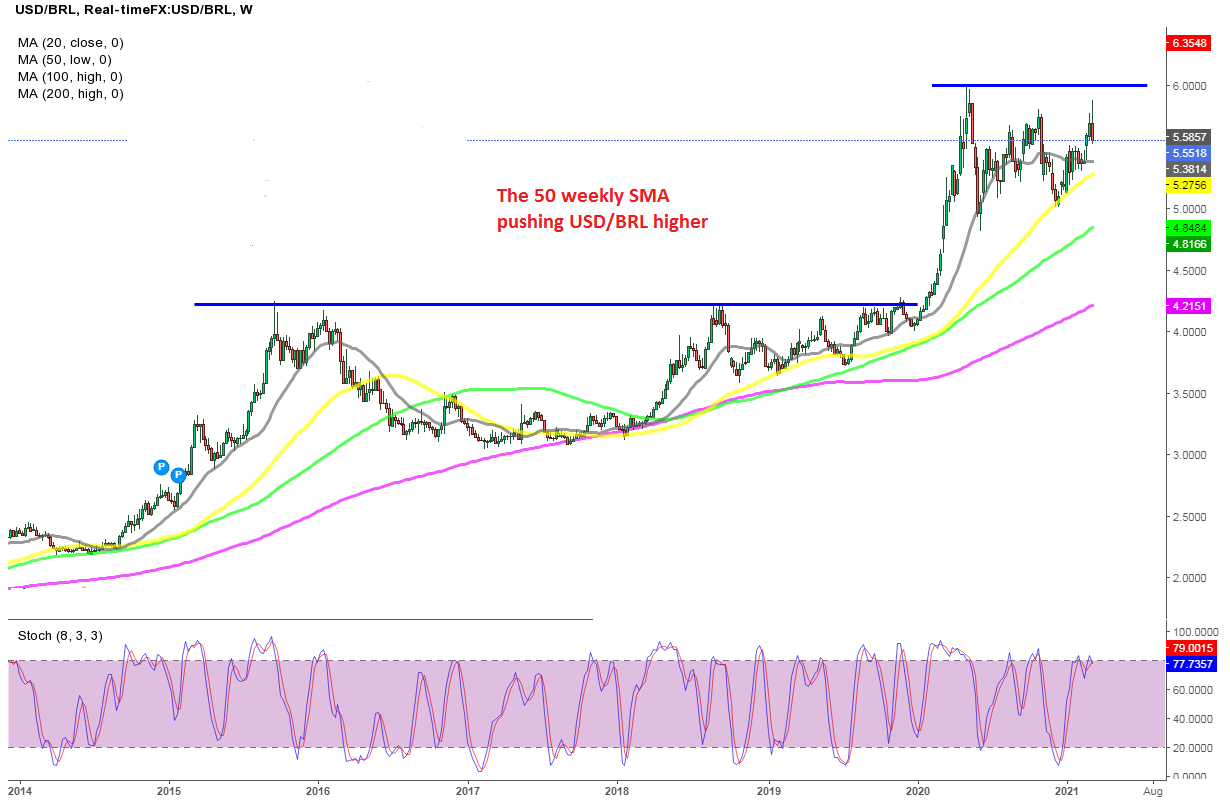 The high from 2020 is the target for buyers now

The trend has picked considerable pace since 2014, as seen on the weekly chart below. From 2014 until 2015 this pair surged from around 2 to 4.20. USD/BRL retreated down but moving averages turned into support in the weekly, particularly the 200 SMA (purple). A triangle was forming as moving averages were pushing the price up, while the resistance area was holding until the beginning of this year. The coronavirus breakout sent emerging market currencies diving lower and USD/BRL surged from 4 to 6, although it didn’t break above the 6 level. During May we saw a pullback lower, as the USD turned massively bearish. But the pullback here was not as severe and the 20 SMA (grey) turned into support for some time. It was broken eventually, but the 50 SMA (yellow) took its turn and the bullish trend resumed again in 2021. Now the price is heading for the previous highs and I think that buyers will push above 6 now.