EUR/USD Price Forecast for 2022: The Downtrend to Continue in 2022? - FX Leaders FX Leaders

EUR/USD has been on a slight downtrend since 2008, which has unfolded in waves, with a bottom put in place at 1.0350. The highs keep getting lower on the larger time-frame charts and in the last few years moving averages have turned into resistance, which have capped the gains. In 2020 this forex pair made some decent gains, increasing to 1.2350, as the USD turned weaker, but the 200 monthly stopped the climb in January 2021 and since then the trend has been bearish.

Recent Changes in the EUR/USD Price

Fundamentals were uncertain in 2020 due to the coronavirus, but in 2021 they became clearer, as inflation kept surging across the world, particularly in the US, where it peaked at 6.8% in December, although many argue that real inflation is higher than that. Inflation increased in Europe as well, but the US is leading the way, with CPI figures we have not seen in decades. This has forced the FED to finally accept that inflation is running out of hand, tightening the monetary policy. The European Central Bank (ECB) is still in the period of denying surging inflation, which has led to a divergence in policies from the two biggest central banks. The FED is looking to tighten faster, while the ECB is still in the process of deciding. The ECB might start to tighten the monetary policy as well in Q2 of 2022 as inflation keeps increasing, but the FED will still be a step ahead, which will mean further bearish pressure for this pair.

The EUR/USD Price Prediction for the Next 5 Years

As we mentioned, EUR/USD has been on a bearish trend since 2008, but it hasn’t been making new lows since 2016, although the highs keep getting lower, which means that the pressure remains to the downside for this pair on the long term. The whole situation with the coronavirus was positive for the for this pair during 2020, which came as a result of the decline in the USD, but in 2021 the situation reversed. Last year, we forecasted that the decline in the US Dollar was coming to an end and it did, turning bullish in 2021 and it is expected to remain bullish for the first half of 2022 at least. Everything is pointing up for the USD and down for EUR/USD, with inflation being higher in the US, the FED being ahead of the ECB toward tightening the monetary policy while the US economy is doing better than in the Eurozone, although both have been in decent shape, especially during the second half of 2022.

Prices have been increasing all over the world during the pandemic, accelerating further in 2021, led by the surge in energy prices. Some economists appoint this surge to the reopening of the world economy following the big closure in spring of 2020, leading to greater consumer demand and supply chain constraints, but there are a number of factors for this, such as higher PPI, central bank spending, government stimulus, higher energy and higher food prices etc. The Federal Reserve kept denying surging inflation until the middle of 2021, but they were finally forced to accept it. As things stand at the beginning of 2021, it seems like inflation will remain high, although it might abate somewhat toward Q3 and Q4.

The producer price index (PPI) which measures the change in prices for goods and services at the producer level has been a factor in the increase of the consumer price index (CPI). Companies often pass the higher PPI costs onto the consumer. The chart below shows the correlation of PPI and CPI, indicating a clear uptrend until the middle of 2021. Supply chain constraints were a major catalyst behind e increase in PPI, with companies having difficulties receiving the products, as production and transit lines have been disrupted. The supply difficulties, coupled with increased consumer demand, have helped increase the PPI inflation. 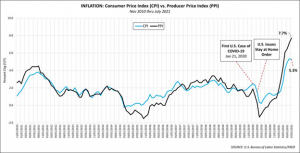 Another strong factor in hiking inflation has been government spending, with the US government passing the CARES Act in March 2020 with $2.3 trillion in spending after some minor packages earlier, the stimulus and Relief Package 3.5 worth $484 billion in April that year. A $900 billion stimulus bill was passed in December 2020, which was followed by A fifth American Rescue Plan worth $1.9 trillion on March 11, 2021. In August, Senate Democrats approved a budget resolution for an additional $3.5 trillion spending bill, soon after passing a bipartisan $1.2 trillion infrastructure bill.

All this cash has had a positive impact in the economy, but it is also bound to have a negative impact on the currency. US citizens were receiving a $1,400 cheque, which filtered all this money faster into the economy, helping increase prices. All this spending by the federal government has created the largest government deficit in US history, which is another factor for higher inflation. A similar scenario has happened in Europe, although the European “federal government” hasn’t been as lavish with the money as in the US, with a €750 billion recovery bill in 2020, alongside the €1 074.3 billion long-term EU budget for 2021, so inflation has been lower in Europe, but it is headed in the same path as in the US.

Central banks are another major player in the inflation equation. The FED started loan and asset purchase programmes as part of the quantitative easing and repurchase operations adding $120 billion per month to the money supply as part of the QE. Central banks have brought rates down as well, with the FED cutting interest to 0.25% where they still stand. Although, they are still higher than the 0.00% refinancing rate and the -0.50% deposit rate that the ECB has been keeping during 2020 and 2021. It’s hard to determine how high inflation can rise, or if it will even rise further, but with a Democratic majority in the US intent on spending excessively inflation might still keep rising in the first few months of 2022, before starting to cool off.

The FED Turning Hawkish Ahead of the ECB

Inflation started to grow early in 2021 in the US in particular, with CPI increasing to 4.2% by April. The signs were all there even in 2020 that inflation was going to run out of hand, as prices for most products started increasing since the first wave of the pandemic hit. In 2021 we have seen an extraordinary increase in inflation numbers across the board, although the FED was in the process of denying it until late summer despite inflation being above 5% for several months. But they were finally forced to accept the enormous numbers and turned hawkish eventually, after keeping the largest expansionary policy ever in the last two years, with trillions of dollars being spent across many sectors. The FED decided in early November when inflation was at 6.2%, to start tapering which refers to a reduction in the amount of bonds it purchases by $15 billion a month. In December CPI inflation increased further to 6.8%, so the pressure for the GFED to start tightening faster is increasing and some economists expect the Federal Reserve to hike interest rates three times in 2022, bringing them to 1.00%.

The European Central Bank of the other hand is still in the phase of denying inflation. CPI has been increasing in Europe as well in recent months, standing at 4.9%, more than twice above the ECB 2% target. But, the ECB, is still trying to brush it under the carpet, hoping prices will abate early in 2022. But, I don’t think that’s going to happen early this year, as energy prices remain high, while most products are also increasing, which means that real inflation is higher than what the CPI tells. We have heard comments from certain ECB hawks who want the ECB to start tightening too and eventually the ECB will accept defeat. But, they are behind the FED in this process and the ECB is coming from lower rates, so this will keep EUR/USD bearish for several months at least.

US Fundamentals Stronger Than the Eurozone

The fundamental picture was similar during the coronavirus times in 2020. Both the economy of the US and that of the Eurozone were dived during the lockdown period in spring, but then started to recover after the reopening in summer last year. Although, the US economy has expanded much faster than the Eurozone economy. The restrictions have continued in Europe on and off, which have played an important role in the Eurozone economy falling behind the US. Manufacturing remains in decent shape in Europe, but US manufacturing is surging as the ISM figures below show. ISM prices have also hit record levels above 90 points earlier this year, while remaining above 80 points throughout the year.

The service sector was hit the hardest by the coronavirus restrictions, and especially the lockdowns, which are detrimental for this sector, since it relies on physical contact between people. This sector fell to record lows all over the world during the spring 2020 lockdowns, particularly in Europe. Services rebounded after the reopening in summer 2020, but the restrictions returned in Europe and we saw a double dip recession that year. Restrictions continue to plague Europe and the latest round in Germany sent the service sector in contraction in December. So, this shows that the US economy is in a better position, which supports the bearish momentum in EUR/USD.

In 2008 EUR/USD turned bearish after a strong bullish run in previous years and remains bearish to this day on the larger time-frame charts. This pair slipped below the moving averages on the monthly chart which seem to have turned into resistance, capping the gains in the last several years. The 100 SMA (green) provided resistance in 2018 while the 200 SMA (purple) did so last year, as the USD was declining. The Euro area has had many problems, with Brexit and now the coronavirus and the restrictions, which have kept the Euro bearish in relation to the USD. EUR/USD hasn’t made new lows since 2016, when it formed a bottom at 1.0350, but we might see the price heading down there again this year, with the FED being way ahead of the ECB regarding tightening the monetary policy.

The 200 SMA has turned into resistance for EUR/USD

On the weekly chart, the trend is less clear, since this pair has made higher lows and lower highs too. The 200 SMA (purple) was doing a great job as support for a couple of years and last year we saw a strong bullish move in EUR/USD, as a result of the USD turning weaker on enormous spending by the US government and the FED. Smaller moving averages were providing support in 2020, but they have all been broken in 2021 as the FED started to tighten the policy. The decline has stalled in the last several weeks of 2021, but buyers are nowhere to be seen, which suggests that the decline will resume in 2022.

The trend has been clearly bearish in 2021

On the daily chart, the trend has become quite clear in 2021, since EUR/USD made a reversal in June, as inflation surged higher in the US. Traders started to anticipate the FED turning hawkish eventually as inflation was running out of hand and the selling pressure accumulated for this pair. The moving averages were broken and they turned into resistance eventually, especially the smaller ones, which shows that the selling pressure is strong. EUR/USD broke below the support at 1.1650, while now this pair is finding resistance at 1.1360s. We see consolidation in the last two months after the decline, which suggests that the decline will resume again.