We have discussed many Forex trading strategies that allow us to analyze the price action from many different angles. These trading strategies give us the technicals, however, there’s one factor that always has the potential to make all of the technicals irrelevant and sway the market in any way that it likes. Big news events from different countries can have a huge effect on the market, effectively rendering all our analysis meaningless.

The forex market is a 24-hour market and news can come in at anytime from anywhere in the world. Changes in the market based on economic news and data can hit any kind of trader wherever he might be and whichever currencies he chooses to trade. If you’re in Asia and like to trade the YEN, there’s news from Japan almost every day. If you like AUD or NZD then you have to watch for news out of Australia, New Zealand, and China. Same goes for EUR, GBP, and USD; you have to check the news during the morning and the afternoon if you live somewhere close to European time zones.

In stocks, major news could be considered the announcements of company earnings, profits, profits per share, industry, macroeconomic data etc. In forex trading, important news that impacts the markets could be Central Bank minutes and members press conferences, inflation reports as well as national and international economic news and data.

One of the first lessons for new traders is that when trading you should keep out of the market during major news releases. Nevertheless, we often find ourselves trading during the news and most of the time it’s not because of greed. Some like the adrenaline, some are addicted, but the majority of traders just like the profits. After all, we are in this business to make money and the risk is a necessary aspect of that.

Trading currencies always involves two currencies. When a trader plans to open a position both country’s upcoming news should be taken into consideration along with any other international news that could potentially affect the pair.

For example, if you decide to trade AUD/JPY, apart from evaluating possible outcome of the news out of Japan and Australia and the effect that it might have on the pair, you should consider important upcoming news from Europe, USA or elsewhere because that news may shock the financial markets. If there was really good economic data released from China, the pair would rally because it means that demand for Australian products is likely to increase. We could expect the opposite if there was really bad news from Europe; it would shock the global financial market and the traders would run for safe heavens like YEN and CHF.

For more on how to trade currencies: Fair Value – An Efficient Way for Trading Currencies

Below are the most important economic data and news and their effect on the country’s currency when the numbers beat expectations:

Now that we’ve established the importance of understanding the news and the affect it might have on the price, we have to learn how to use news releases to our advantage. There are two methods to using the trading the news strategy – long term and short term.

When looking for long term trading opportunities based on economic news it is important to analyze both the previous and current data. This is because sometimes news takes weeks of months to be absorbed by the market. We can use the data to see the bigger picture and the affect that it might have on the currency. The long term trends are created by fundamental factors, which are many economic pieces over a certain period of time.

Looking at the GBP/USD chart below we can see that an uptrend started to form a year ago and it has been a one way journey ever since. Similarly EUR/GBP has been in a downtrend for about the same period. But these trends didn’t begin out of the blue. The economic data that came out of Britain during the past two years, or even longer, has made this possible. Most of the news has been indicating the imminent recovery of the British economy long before the trend started to form. If a trader read and analyzed the data correctly, he/she would have bought the Pound last summer and pocketed about 2,000 pips. 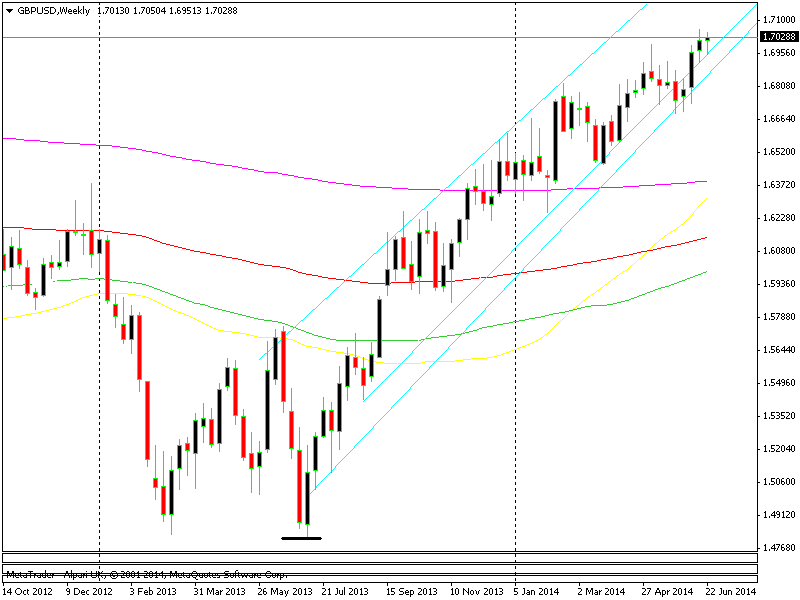 GBP/USD weekly chart demonstrates a year-long uptrend which could have been foreseen by analyzing the news out of UK. 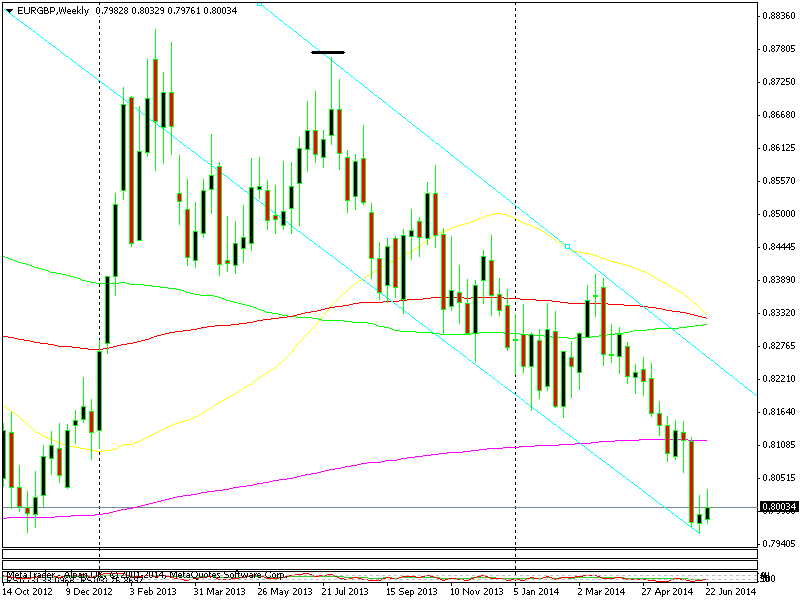 EUR/GBP weekly chart similarly shows a downtrend that could have been foreseen by understanding and analyzing the news out of UK.

Sometimes long term trends are created by a single news event, especially when that event is something the market is sensitive to at that moment. Such was the case when the ECB announced it would expand the monetary policy, would cut Refi rates and introduce negative deposit rates. That meant that more Euros would flood the market and we know that when something is in excess it becomes cheaper.

The market was waiting for that event for quite some time. We see from the chart below that Euro fell about 160 pips during that day and about 500 pips in total. It formed a downtrend since then, breaking level after level with no technical succeeding in stopping it.

Only a big news event can affect the market in such a way, the price breaks every support level lying in its way on its long way down.

Trading news intraday is a bit more difficult because of the volatility and tighter stops. Usually, 1-2 minutes before and after there are whipsaws, with the price moving frantically in both directions. Short term news trading is split into several strategies:

Selling bad news spikes – One way is to sell the spike after worse than expected news or vice versa. Sometimes, even after really bad data, the price jumps for a few seconds or minutes. That is the best time to sell, especially if it’s at some big level or resistance. After the FED Chairman Yellen failed to deliver on the Tapper on June 18, which is dollar negative, USD/CAD jumped 30 pips to 1.09 only to reverse on a 150 pip fall. 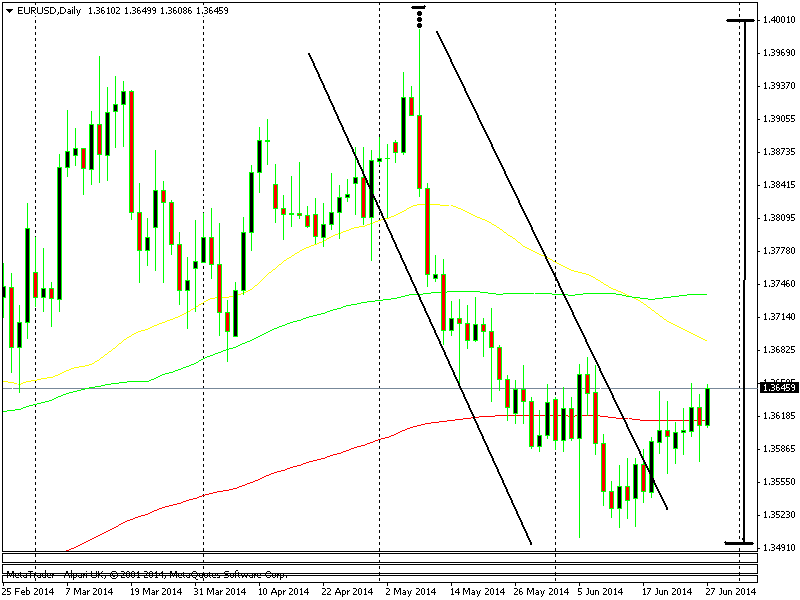 Momentary peak follows news that should cause a downtrend, indicating the best time to go in short.

Buying after bad news, because of previous good data, causes a pair to form an uptrend. Though infrequent, worse than expected news cannot be ruled out, though it won’t affect the overall outlook of the situation. So after an initial fall we should look to buy the knee jerk reaction.

This happened to the USD/CHF on June 25 when the US GDP was much worse than expected. The pair had been in an uptrend for about two months with very good data, so one piece of news wouldn’t suceed upsetting this. The pair fell about 30 pips immediately, and then bounced right back. 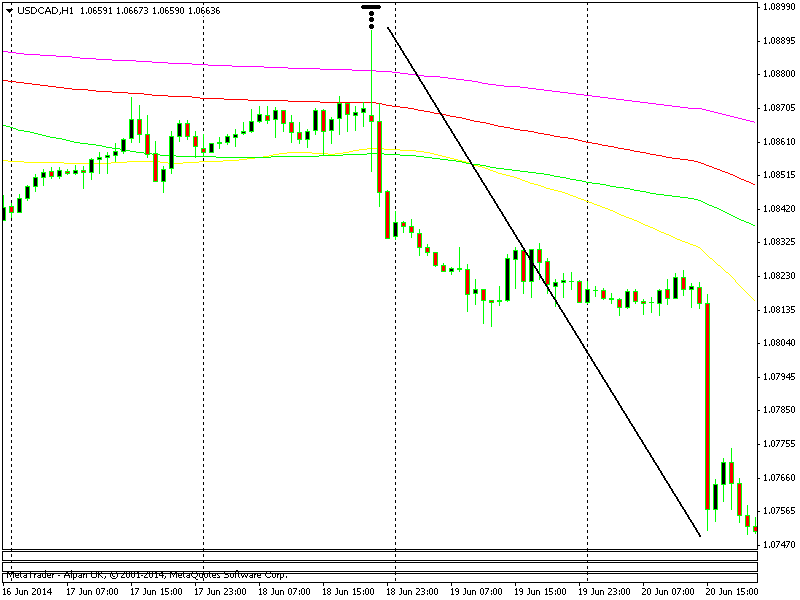 Bad news doesn’t always lead to a long downtrend, the fall can be momentary and then the price starts pushing up back to its previous level.

Trading breakouts – Prior to important news, the price often gets confined in a tight range, uncertain of which direction it should take. This scenario is best traded with pending orders on both sides – sell a break below and buy a break above. It’s advised that the orders be placed considerably away from the range, to avoid whipsaws. The chart below shows a good opportunity on USD/CAD on June 23 when retail sales and inflation CPI came out much better than expected. 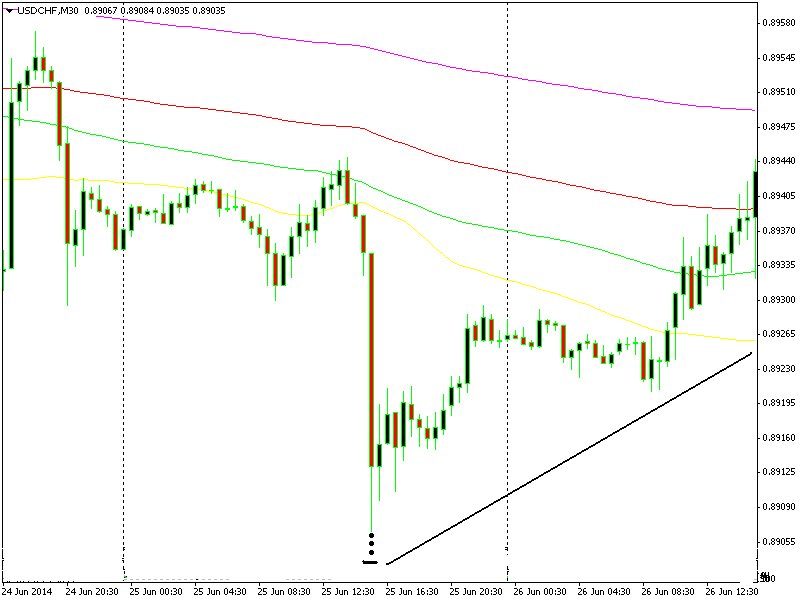 Price gets stuck in a range before the big news announcement and then suddenly jumps in one direction after the news is announced.

News anticipation – Anticipating the news and reading price action is not easy to do, but like all things it gets easier with experience. Addtionally, it has the potentialy to be a very profitable strategy.

On May 1st at 8:30 am GMT the manufacturing PMI was expected to be realeased. The market consensus was for a lower read but with the recent good data, chances were that the numbers would exceed expectations. Looking at the 15 min candle on GBP/USD right before the release, it jumped some 25 pips, which suggested that the data would beat expectations, and so it was. So I bought during that jump and locked it at breakeven. Then the news came and the rest is history. 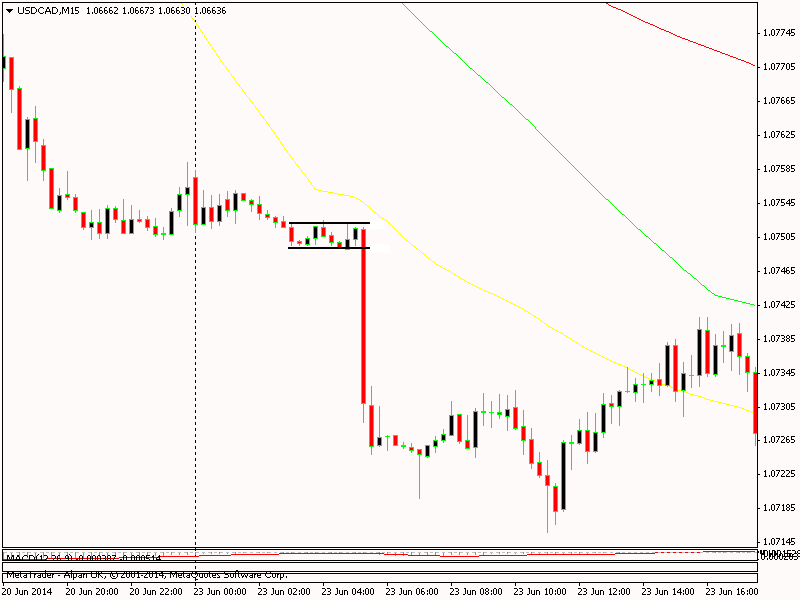 First candle jumped 25 pips, indicating that the news would be better than expected.

The same happened on April 16 with the GDP numbers. The 3 hourly candles prior to the release were really bullish, pointing to better than expected data. So I bought in the middle of the second candle and closed some profit in before the news release. After the news it jumped another 60 pips. 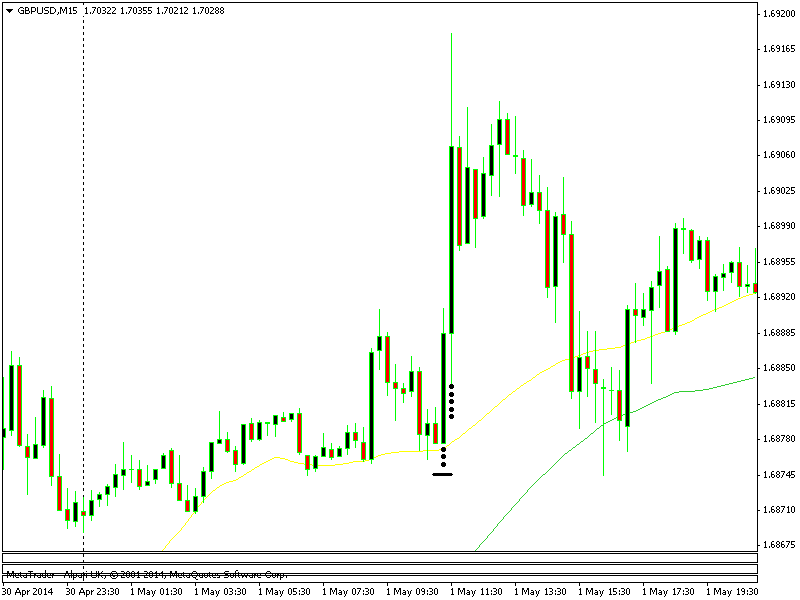 Each candle is more bullish than the one before, great opportunity to make an easy profit.