New strategies breathe life into the market, so we are presenting the ‘Elliott Wave Theory’, named after Ralph Elliott. Having nothing in particular to fill his days, Elliott turned his attention to stock market behavior and developed his theorem in his later stages of life. Born an accountant, he retired at age 58 after catching a virus from a trip to South America. This is one of the oldest trading strategies, first published in 1938 as a book under the name ‘The Wave Principle’. Until that time, the general concept was that the market behaved in a chaotic manner and there were not many trading strategies that existed. 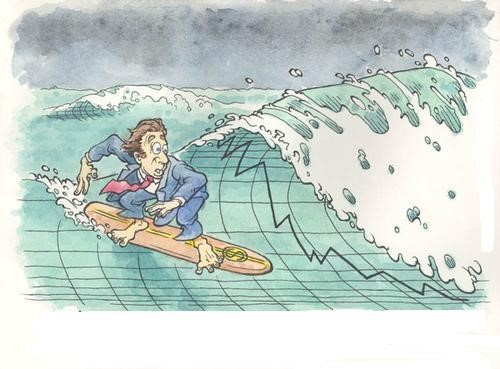 Mr. Elliott analyzed around 70 years worth of stock prices data in his lifetime. He pointed out that the market was driven by human psychology (i.e.emotions, fear, and greed), are did not behave in a chaotic manner. Instead, the data showed that the market moved iteratively. Elliott then developed his theory based on crowd psychology.

It can be tedious to remain in the same mental state or mood, excepting those who have a pathological disorder of course. Thus, he came to a conclusion that group psychology switches back and forth from optimism to pessimism and back to optimism at varying levels. He applied this theory to the financial market, which strongly suggested that during strong up trends (market optimism), there are intermittent intervals when the market ‘mood’ changes. At this point, the market participants sell the financial instruments that they have acquired and invest back in them at a cheaper price when the mood reverses again to optimistic. The opposite situation applies to a strong downtrend. 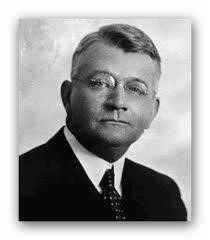 Now let´s start explaining the Elliott Wave theory (acronym EWS – Elliott Wave Strategy). As mentioned above, crowd psychology dictates that the market will ‘swing’ between optimistic and pessimistic modes. Since the financial markets are essentially a large group of human investors, crowd mentality is naturally applied. In a bullish market, when the investors are in a positive mood, they are willing to take more risks and rush in to buy stocks, bonds, certain currencies, commodities etc. The buying spree, which escalates prices, is noted as the impulsive or motive phase. After buyer’s remorse sets in, a reasonable amount of these financial instruments is dumped back into the market. Selling prices down is called the corrective phase and thus forms a correction in the chart, according to bullish markets. According to EWS, the motive phase unfolds in 5 steps (see chart below). 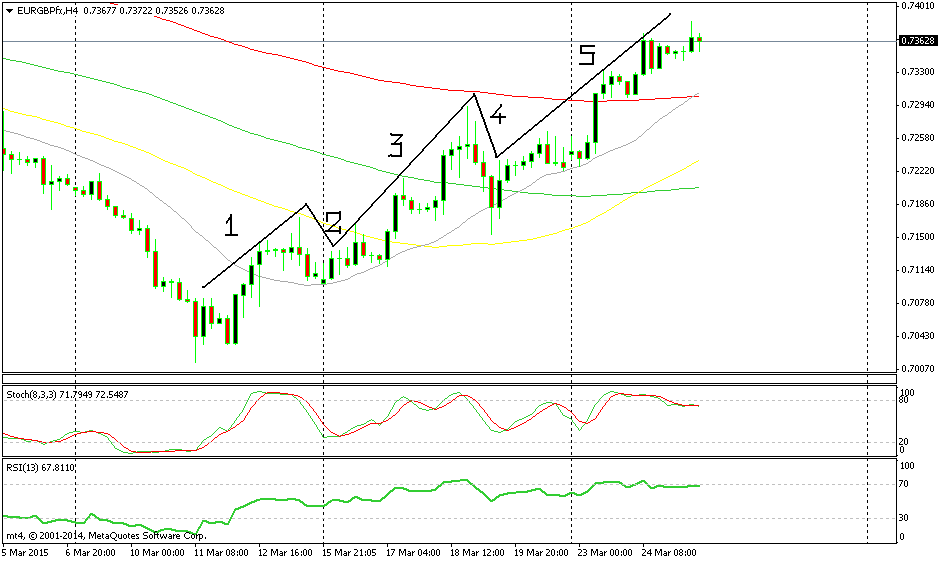 In the chart above, the initial wave shows that the buyers are willing to take more risks, which is normal in a bullish market, sending the prices up. The second wave (1) shows the element of human emotion, as fear pushes the price down, forming a corrective move on the chart. Analysts and traders often refer to this as the emotive wave, because in a bullish market you are expected to buy. After all the emotions and fear have been consumed, the investors feel bullish again and buy, forming a strong uptrend on the chart (3). Then comes the fourth wave (4), which is the second corrective wave and acts to ‘retrace’ the wave. After the fifth wave, (5) the price eventually settles up near the highest point of this pattern, at an expected height for a bullish market.

But Elliott Wave trading is not over yet. These 5 steps are the first part of the strategy, and generally the price has steadily increased from the bottom of the first wave to the top of the last wave. Now, if you expand this chart over a longer time period, this will look like one single uptrend. Normally we should see a correction take place, which would show as a second wave over the longer time-frame. However, when we change back to the shorter time-frame we can see that this happens multiple times. Elliott Wave theory refers to this as the larger corrective trend and it includes three waves: A, B and C (picture below). 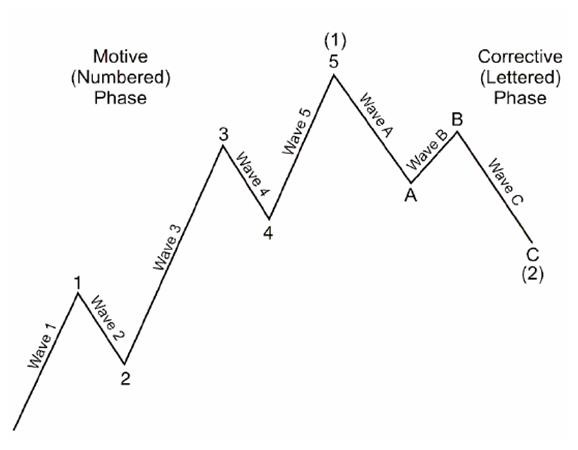 The same way that the above Elliott Wave theory depiction is part of a longer, bigger formation, other smaller patterns might be part of this one. Each impulsive wave of this pattern (1) is composed of 5 waves of smaller, intermittent patterns. These smaller corrective waves (i.e.. 2 and 4), are made up of the A, B, C corrective trend of the smaller one. The shorter Elliott Wave patterns are formed by psychological cycles of the traders and investors that use shorter time-frame charts.

This strategy is very common, and many traders use this as their main indicator for predicting the market. So with a little detail, our readers can incorporate this strategy to theinto personal market routine. We explained the basics of Elliott Wave theory; further articles will explain how to further enhance your buying strategy.