Blazing Guns and Bazookas – All Eyes on the ECB

Today’s focus will undoubtedly be on the European Central Bank, to see whether they will further cut interest rates and expand their quantitative easing programme, or not. How can we trade the Euro, and some of its ‘major’ counterparts today? 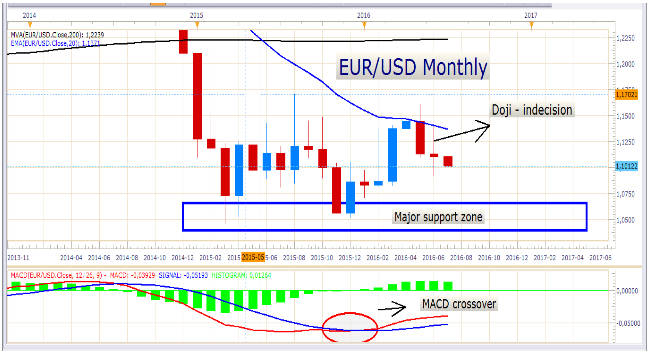 EUR/USD Monthly chart
Trading in a wide range for about 17 months, the EUR/USD seems to have gained traction above the important support zone in the 1.05000 area. The reason I’m looking at such a long-term chart today is to help us remember the bigger picture and recognize that this pair might perhaps have set an important, long-term swing low back in March 2015. It seems as if the large institutional players are accumulating Euros at this time, having found a level of good value between 1.05000 to 1.11000. So, despite the many risks surrounding the Eurozone, traders should be careful not be caught in a mighty short squeeze, if we get a sort of relief rally for some reason. In the above chart, we already see an MACD crossover having formed, and we see that the June monthly candle is a doji, which indicates market indecision. Now, to see an indecision candle being formed in the same month in which the Brexit majority vote was captured, to me serves as a warning to the sellers. One would have expected the month of June to print a massive red candle which closed on its lows. But it didn’t.
To look at the pair from a more short-term perspective, I wrote on Monday evening that I expected the pair to trade lower, which it did, but yesterday it printed a hammer candle on the daily chart indicating possible short-term support stepping in. Look at the chart below:

EUR/USD Daily chart
However, on a 4-hour timeframe we see that the short-term momentum is still down, with the price being capped by the 20 EMA (blue moving average). See the chart below:

EUR/USD 4 Hour chart
Trading major news events like the ECB later today can be very tricky and risky. The price can do anything depending on the outcome of the meeting. Personally, I would not try to pre-position myself today, for today’s event, but rather trade the outcome of the event, and the momentum which could possibly result from it. If the ECB delivers a rate cut coupled with a meaningful easing package, we could see the Euro fall further. If they disappoint, the single currency could trade aggressively higher, just like we have seen at a previous meeting.
Let’s take a brief look at some other major pairs…
AUD/USD – The Aussie seems to have set a lower high on 15 July, and over the short term, momentum is clearly bearish. Traders taking the short side may want to target the ‘zero point’ of the recent bullish wave (the level at which the wave started, indicated by the horizontal orange line). More conservative traders might want to target the 200-day moving average (the black moving average). See the chart below: 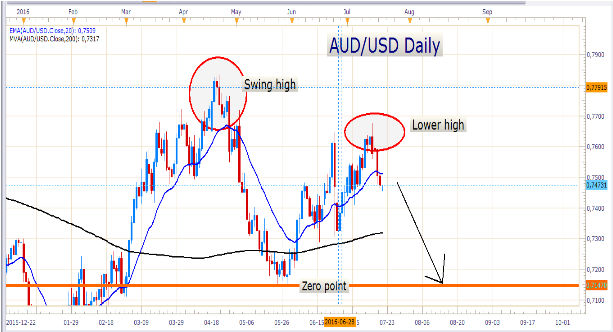 AUD/USD Daily chart
The shorter term traders might sell pullbacks to, for example, the 20 EMA on either a 4-hour chart or a 1-hour chart, as the price is currently sitting below these exponential moving averages. See the hourly chart below:

AUD/USD Hourly chart
Notice how price rejected off of the 20 EMA several times in the last few trading sessions.
USD/JPY – This pair is still powering upwards, and on the hourly chart below you can see that it remains well supported by the 20 EMA. My bias has to remain bullish for now, as the bulls are clearly still in control.

USD/JPY Hourly chart
GBP/USD – This pair has been carving out lower highs and lower lows on the hourly chart below, and we might see this pattern continue over the next few days. 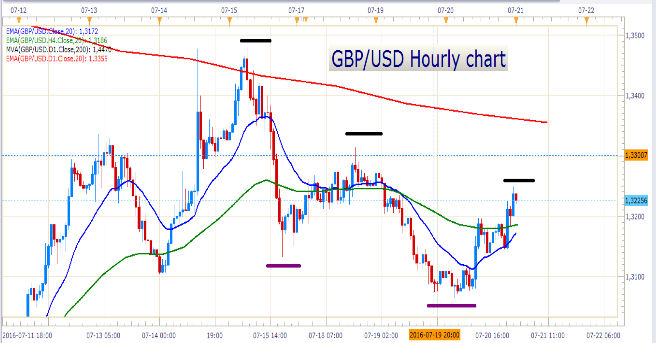