These last few weeks have been a very active time for the Japanese Yen, and we have seen large impulsive moves in Yen pairs. The Yen has been chased around the charts by market players pulling the trigger on almost any rumor or piece of news about Japanese monetary policy, and further economic stimulus.
Today, we have their different rate decisions, a policy statement, and also a press conference a bit later. Now we have seen quite a bit of whipsaw in the exchange rates, with different market reactions to different rumors and facts about the size of the stimulus package expected.
However, the big question is, what exactly is the market expectation of the event, and how much of the stimulus deal has been priced into the exchange rates already? The market is expecting a large stimulus package of about 28 trillion Yen. If the BOJ doesn’t deliver what the market expects, we might see the Yen resume its bull trend. If the BOJ lives up to the market’s expectation, we might see an initial drop in the Yen, but I wouldn’t trust such a move to continue for an extended period of time. Many times it is not the actual event that triggers large moves, but the anticipation of the event. Let’s see how the USD/JPY fared yesterday: 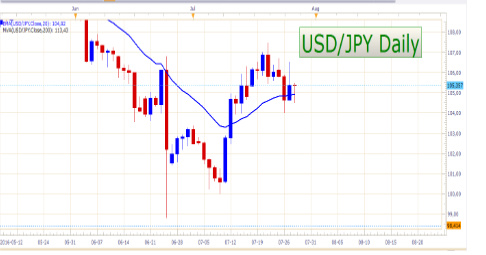 USD/JPY Daily Chart
As you can see, the pair nearly closed at the level where it opened yesterday, posting a doji (indecision) candle. I am not too excited about trading the BOJ news today, as it can be very unpredictable and choppy. I am more interested in the technicals than in the fundamentals. Let’s zoom out a bit and look at the bigger picture: 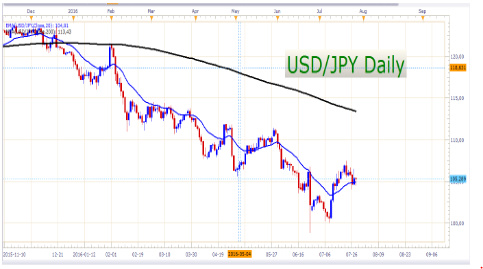 USD/JPY Daily Chart
Notice how the price has been trading below the 200 day moving average (black line) for quite a few weeks already. The pair is clearly in a downtrend, and although there has been a sharp correction in the last week or two, the technicals suggest that the downtrend is still intact. I wouldn’t be surprised if the pair declined further after the BOJ event has passed.
My personal game plan is to watch the pair today, and see what the BOJ does and says. Then, on Monday or Tuesday, I will look to initiate new trades if I see favourable price action setups to trade. These will probably be short positions, but let’s first see what happens later today.
Traders should be mindful of month end flows today, seeing that it is the last trading day of the month.
Something else to watch today is risk sentiment. When central banks act, it sometimes has tremendous effects on market sentiment. So be sure that the BOJ’s deeds and words may affect not only Yen pair but a multitude of other instruments. Be ready for volatility.
Besides the BOJ today, we also have the European bank stress test results being released. Perhaps it will not have an enormous effect on FX, with market players being distracted by uncertainty surrounding the BOJ’s actions. Nevertheless, if we see some (further) major problems in the banking sector, this could spark uncertainty in the financial world which could quickly trigger risk aversion. This would certainly whet investors’ appetite for safe-havens like gold, the JPY, the CHF, to a certain extent the USD, and other assets.
Then we have GDP numbers out of Europe and Canada. This is also something to keep an eye on.
Let’s look at some of the other major pairs:

EUR/USD Daily Chart
Yesterday, the  EUR/USD pushed aggressively into the resistance zone I mentioned in yesterday’s trading plan (Focusing on the Eurozone and Germany For the Day). If you look very closely at yesterday’s candle, you’ll notice that the pair gave back more than half of its gains for the day, to close below the 200 MVA. As you can see, it left quite a long wick to the upside, which might indicate near term losses for the pair. This looks like a very tradable opportunity to me. Look at the trading setup below: 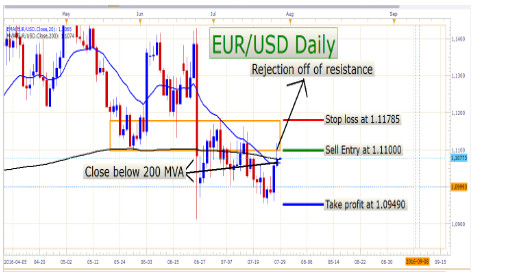 EUR/USD Daily Chart with a trade setup
The orange box marks a resistance zone. I would place a pending sell limit order at 1.11000 with a stop loss at 1.11785 and a take profit at 1.09490 or lower. This can, of course, be adjusted to suite your trading style.
USD/CAD: 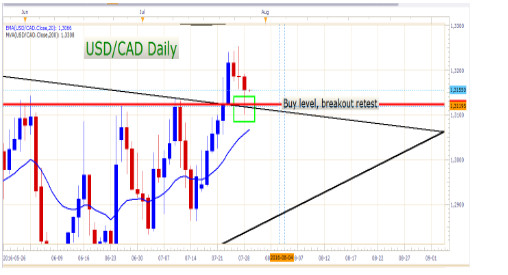 USD/CAD Daily Chart
As I mentioned in recent articles, I have been anticipating the breakout retest on this pair that occurred yesterday when the pair dipped right into my buy level (the red horizontal line). See the green box and the daily candle that forms a long wick; this just penetrated the buy level and shot up again. If you missed the opportunity, there might be another one if you’re lucky. I am still bullish on this pair, and perhaps we might get some more upside over the next week or two.
Best of luck with your trading!
Check out our free forex signals
Follow the top economic events on FX Leaders economic calendar
Trade better, discover more Forex Trading Strategies
Related Articles