2 Major Reasons Behind a Drag in the WTI Crude Oil

Today on the 16th of Feb, the WTI crude oil consolidated in a narrow trading range of $54 – $53.75 in the Asian and European trading sessions. Investors continued to benefit from the choppy trading by entering a sell position at an upper boundary and a buy position at a lower boundary of the trading range.

In the early New York session, the oil was trading quietly around $53.83, but all of a sudden, we saw a dramatic sell-off in the U.S Oil and it dropped more than 70 pips to $53.12. This took place in a span of less than half an hour. If you are wondering the reason behind the drastic drag down in the instrument, then let me help you with this.

2 Reasons Behind a Huge Drop in the WTI:

Firstly, the fundamental reason was the economic event of the Natural Gas Storage. The U.S Energy Information Administration (EIA) reported a less than expected decline in the natural gas supplies. As per the S&P Global polling, the supplies were anticipated to fall 126 billion cubic feet, rather than 114 billion cubic feet.

Simply put, the less usage of gasoline indicates a less demand and higher supply in the market. Eventually, it roused the investor's concern about the global economic growth, causing a sharp sell in the prices of gasoline. 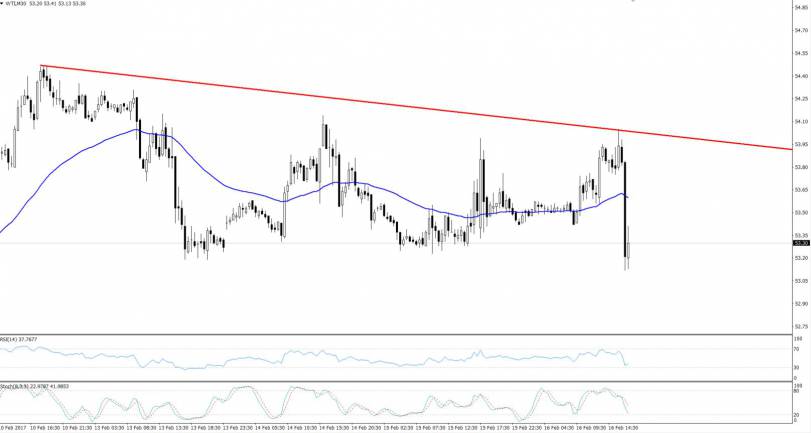 Secondly, while observing the above chart, we can see a clear triple bottom pattern that’s providing a support level around $53.78. The selling move was followed by a bearish engulfing candlestick formation in the 15 minutes time frame. However, the fundamentally supported instrument kept on violating some minor support levels during its ride towards another triple button support level of $53.20.

At the moment, the WTI crude oil is trading at $53.26, right above the area. Technically, the black gold is trading in an oversold territory but buying here can be a risk. However, we can take a chance with a minor stop loss at $53, with a take profit at $53.45