Today in the early Asian markets, the WTI crude oil soared for another 42 pips, to place a high at $48.81. In reference to the previous trading signal and live market update entitled Bulls of Crude Oil Fear a Reversal, the black gold just missed our take profit by 4 pips. That is why we closed our oil signal manually.

One of the major reasons behind increased oil prices were the remarks from the National Oil Company of Libya. They reported a decline in crude oil production, which helped underpin prices because of supply concerns in the market.

I'm waiting for the Crude Oil Inventories that are due to be released at 15:30 GMT. If we look at the consensus forecasts, the numbers seem quite low, at 1 million barrels compared to the 4.5 million barrels last week. 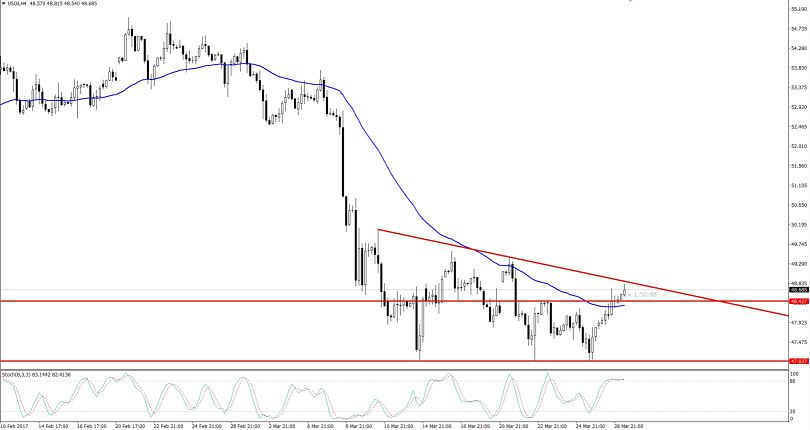 In the 4-hour chart, the stochastic shows that the black gold has entered into overbought territory. Moreover, we can't ignore the strong descending trend line that began on March 10th. It is providing major resistance at $48.85. Though the 50 periods EMA is suggesting a buying signal, we don't have to wait until the price crosses above the trend line resistance.

Trade Idea: Traders, I am going to wait for the release of Crude Oil Inventories before placing any trade. On the breakage of $48.85 though, crude oil has potential to go for $49.40. On the other hand, selling is recommended below $48.85 with a take profit of $48.10.