Today in the Asian session, the precious metal Gold traded bearish below $1246 exactly as we expected, as explained in our previous update Finally A Breakout In The Gold – What’s Next?

Previously, the gold failed to continue its rally of above $1,260 as this level has proved to be a very strong resistance level. However, the weakness in the Gold was not merely due to technicals, but also the attraction of the stronger U.S dollar also won over investors.

As we know, there is a strong negative correlation between the USD and the Gold. These two are considered substitutes for each other in the investment market. That's why the performance of the greenback has had a major impact on the Gold in the previous month.

In the month of March, the Fed Rate Hikes have damaged the ample demand for Gold. In addition to this, the recent growth in the gross domestic product (GDP) has placed further weight on the precious metal. 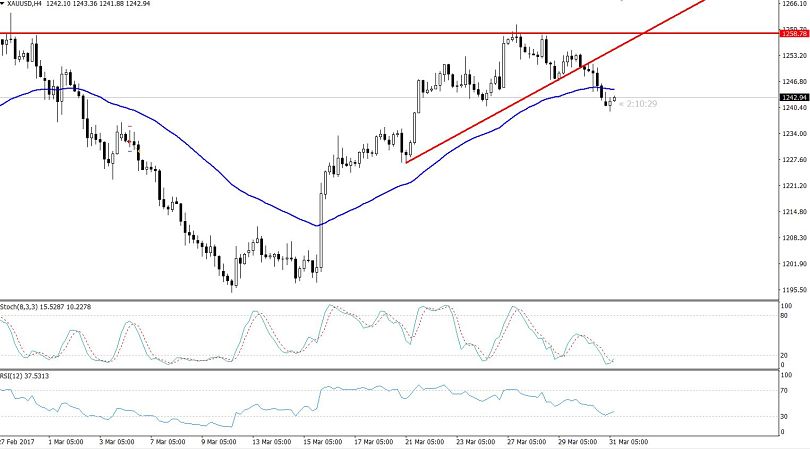 Let me draw your attention towards the 4 – hour chart, which clearly shows that the Gold is consolidating in a narrow trading range of $1240 – $1258. In addition to this, the yellow metal is trading below a 50 periods EMA along with the RSI which is below 50. Both of these technical indicators are recommending a selling bias in the pair.

Lastly, as discussed in our Weekly Update today, we have an ISM Manufacturing PMI figure from the United States, which is due to be released at 15:00 GMT time. Traders are advised to monitor the event as a significant change in the figure is likely to give us a breakout from the trading range of Gold.

Trading XAU/USD: Everything You Should Know About Gold Today
3 days ago