Happy Friday, traders. The first week of April awarded us excellent trading opportunities and our forex trading signals went really well. We have finally reached the big day. You are correct if you are thinking about the release of the Non-farm employment change and unemployment rates from the United States. But before we get to that let's take a look at what's wrong with the market today.

The stock markets are crashing – the S&P 500 dipped -0.32% along with the Nasdaq which dropped -0.27%. The crash is not just limited to the stock market, the Gold has also been affected. The precious metal has just crossed above a significant level of $1260.

In addition, the WTI Crude Oil has soared by $1/ Barrel in early morning sessions alone. Yes, this is definitely a tremendous shift in the price. Thankfully, we didn't enter a trade last night due to factors discussed in our previous report on crude oil.

It’s Not NFP, But Something Else

Examining possible reasons for this crash, the very first thought that comes to mind is that maybe investors are pricing in the non-farm payroll, but that doesn't seem to be the case. I just heard news that the United States moved cruise missiles onto an air station in Syria, boosting the risk for conflict with Syrian supporters Russia and Iran. When we talk about the conflicts between Russia and the United States it seems like a setup for the World War III. The prospect of conflict or even war greatly threaten the market and increase demand for haven assets.

We will talk about this in our next section, but before that let's have a look at important fundamentals that are set to be released today. Before I proceed further, I would like to clarify that in reports, I mention only those events which are worth watching and ignore those which are likely to have only a muted impact.

Stock markets are highly sensitive to news that threatens global economies. This is why we have seen a major sell-off in the indices. Investors look for something safe to invest in and as we know, the Gold is considered one of the safest investments due to its intrinsic value and global acceptability as a medium of exchange. Consequently, the prices of Gold soared sharply to place a high of $1269.26. 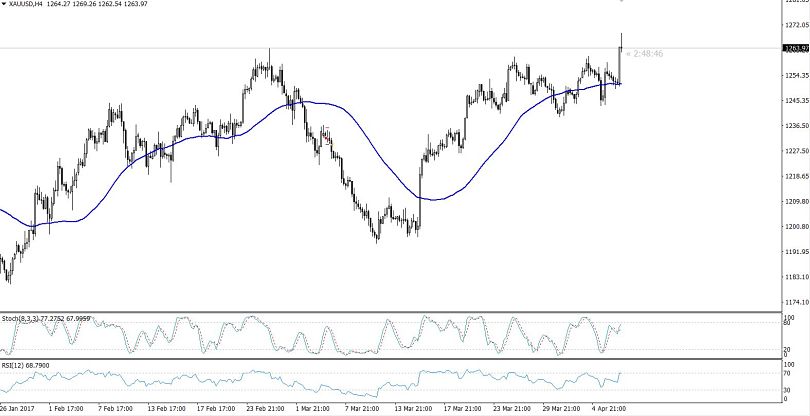 We previously discussed trading opportunities in the Gold in our previous report titled, Gold Prices Regain Momentum – Do We A Have Trade Here?. In our report we discussed how the Gold finally broke above a major resistance level of $1260, giving us a buying opportunity. However, looking at the 4-hour chart, we can see the RSI is staying close to 70, demonstrating an overbought scenario. The 50 period's EMA is also flagging a bullish preference of the bullion.

I would recommend closely monitoring the Non-farm employment change and the unemployment rate figures from the United States for further clues as to the market's next moves.

My thoughts on NFP – Positive/ Negative?

Traders, the ADP Non-Farm Employment Change is considered a predictor for the Non-Farm Employment Change. Even more so, they are a postively correlated pair. Thus, the concrete ADP figures leave us with positive odds for the NFP as well. Nevertheless, in the case of unfavorable NFP, we are likely to see a massive shift in the market. In this case, the yellow metal may reach above 1270's. Good Luck!