On Friday, our the forex trading signal on the Gold was a huge success. I'm not saying this due to the 60 green pips take profit, but rather because the market reversed right after hitting our suggested take profit level of $1269 and after placing a high of $1270.

In the ending remarks given in our 7th of April Morning Brief, the market reacted exactly as we expected. The yellow metal turned bullish right after the release of the drastic shift in the U.S Non-farm payroll.  The figures released at 98K ,which was way lower than the expectation of 180K.

But Why Did The Market Reverse After Testing $1270?

This is because of the unemployment rate, which declined to a 10-year low of 4.5% from 4.7%. Traders, I would like you to remember one thing. The market always reacts first on the NFP figures and later continues its trend based upon the positive/negative unemployment rate. The unemployment rate was strongly positive. Consequently, the precious metal returned its earlier gains to the market and is trading at $1253.20.

Today in the early Asian session, the market is not having much volatility. However, It's normal as the traders are likely to give the market time to settle from its earlier shocks.

Today, we don't have any major economic event on the table. Hence we need to trade with a stronger dollar sentiment and technical levels. 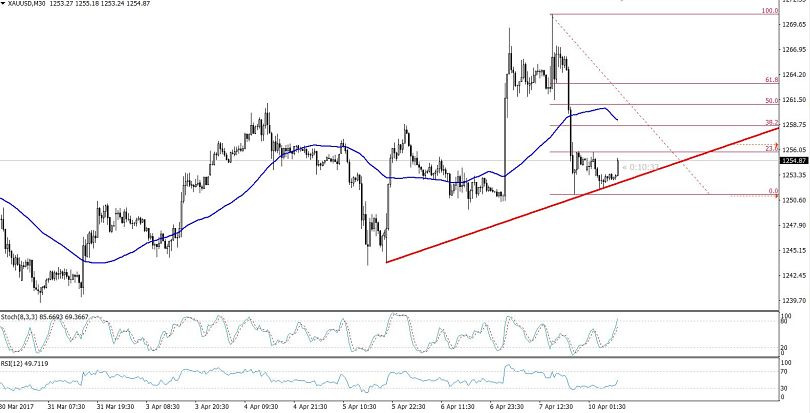 In the hourly chart, we can see a bullish trendline which is extending a major support at $1252. The leading indicators, stochastic and the RSI are coming out of the oversold territory, which seems to recommend a buying sentiment for the bullion.  Whereas, the 50 periods EMA is not in support of a buying trend.

We can see an upside movement in the gold, maybe not a rapid one, but it's likely to complete 38.2% Fibonacci retracement at $1258 in the hourly timeframe.

Forex Trading Signal: Though the trend is not very clear and the market is lacking volatility it's better to look for short trading opportunities. Such as adding a buy position only above $1252 with a stop loss below $1250 and a take profit at $1258.

Forex Signals Brief for January 27: US Q4 GDP Gives the USD A Small Boost
2 hours ago