Bullish Nikkei – Are You Ready To Buy? - Forex News by FX Leaders

Bullish Nikkei – Are You Ready To Buy?

Today, the global stock markets are trading mixed in the absence of solid fundamentals. I was monitoring the U.S stock market indices, especially the S&P 500 which fell nearly -0.05%. The DJI also dropped around -0.13% during the Asian session.

Now the point to note is that the Japanese Stock market index Nikkei has made its way upward despite the lack of fresh macroeconomic support. It has added around +0.70% till now, and more bullish action is yet to come.

Major Reason Behind The Bullish Nikkei

As we discussed in our 2nd May Morning Brief, the Bank of Japan (BOJ) kept the monetary policy unchanged and has adopted a dovish stance. The policymakers decided to strictly monitor the consumer prices since they are lacking upward momentum. More importantly, the BOJ has decided to continue with its quantitative easing to meet the 2% inflation target.

As a consequence, the increase in money supply helps the corporate sector to borrow loans at a lower cost which ultimately helps business expansion, increases sales and boosts the profits. That's it! Being an investor all we need is the good share in profit. That's why a dovish stance on the part of the central bank increases the demand for stock markets due to investors' bullish sentiments. 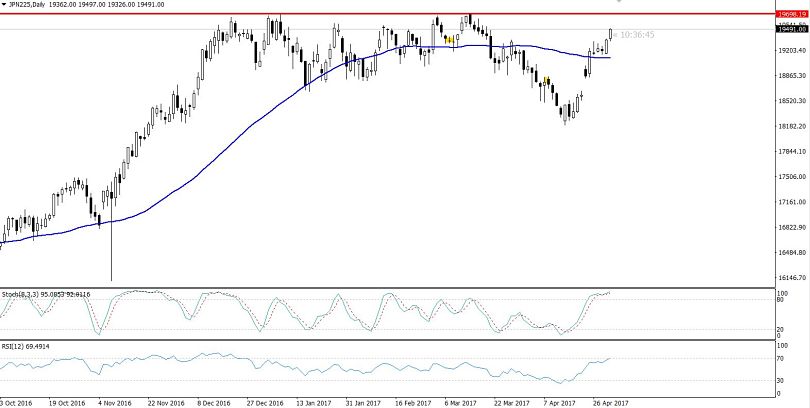 In the daily timeframe, the Japanese Index has crossed above 50 periods EMA resistance at $19170. Yesterday, the Nikkei formed a bullish engulfing candle, demonstrating a strong buying sentiment on the part of traders.

Today in the Asian session, I shared a trading signal to open a buy position at around $12445 with a stop loss below $19255 and a take profit at $19600. Our trade is already in profit, so I recommend drag their stop loss at break even levels.