Forex Signals Brief for May 3rd

Yesterday, the market remained highly nonvolatile due to a lack of significant data from the United States. Additionally, investors seem hesitant to enter the market before this month's major economic events. In particular, the U.S. dollar index traded flat against the basket of major currencies as investors are waiting for the Federal Reserve rate decision later today.

What To Expect From The FOMC?

Janet Yellen and the remaining officials of the Federal Reserve raised the interest rates for the second time in three months. The major reasons for the speedy rate hike were growing inflation and increased economic growth.

The most recent rate hike was in March 2017, the previous one was in December 2016. We need to consider several factors before predicting the FOMC decision.

Inflation – The Fed's favorite economic tool is inflation. In every meeting, they talk about inflation figures. This week, the inflation figures showed a rise of 1.6% y/y which was lower than 1.8%. Yet, the Fed is closer to its target of 2%.

My opinion – The Fed is likely to keep the rate unchanged at 1% and I'm not expecting any surprises from the FOMC statement today. However, we have to look out for any clues in regards to the June rate hike.

The single currency Euro gained a support upon the release of several economic events from the Eurozone. Although the economic events were not high impact, collectively they had an influence. As discussed in the May 2nd Morning Brief, the Eurozone released manufacturing PMI fell insignificantly to 56.7, compared to a flash reading of 56.8, although this was still a six-year high.

Their unemployment rate rose to 9.5% for the month of March. This figure was also marginally higher than the expected figure of 9.4%. But, the impact was muted. Today, investors focus will remain on the FOMC meeting, therefore the EUR/USD could become highly volatile in the New York session. 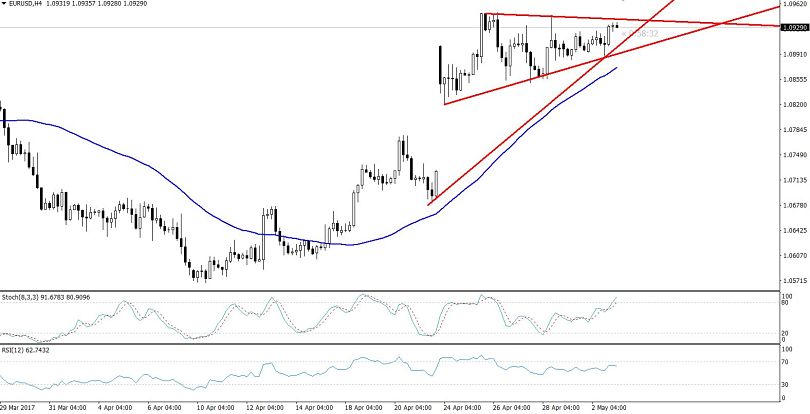 The EUR/USD kept on consolidating in a range due to thin volatility. As we can see in the hourly chart, the pair has kept to a tight trading range of $1.0850 -$1.0950.

In the 4-hour chart, the pair is still trading in an ascending triangle pattern which signals that the breakout is imminent.

Though the market sentiment is bearish towards the pair, the long term scenario seems to be bullish. The reason I'm saying this is due to the $1.0850 trading level. In my opinion, the market is likely to stay bullish only above this level. Below this level, the prices will drop to new lows.

This week, the macroeconomic events have failed to generate major fluctuations. That's why we have yet to see any breakouts. However, the game is still on as we have FOMC Statement, Fed Fund Rate and, more importantly, the Non-farm payroll being released this week. Keep following as we will share more updates soon!