Forex Signals Brief for May 5th

The bullion market dropped for another consecutive day as traders ignored the weaker dollar and kept trading the faded safe haven assets. The interesting part was when the traders ignored the negative correlation between the Gold and U.S dollar, as both of these were trading bearish at the same time. This is very uncommon, but it seems that the fundamentals played their role. Nonetheless, our forex trading signal in the recent live market update report, Gold Before & After FOMC – A New Trade Setup, did well.

Yesterday, the dollar traded lower despite the better than expected economic figures. The U.S. unemployment claim fell to a 17 year low, to 238K last week, down from 257K previously. Moreover, the U.S. factory orders grew less than expected in March, which resulted in major drops in crude oil prices. The United States, being a top oil consumer, heavily impacts the oil demand.

Today seems to be a Labor market day as the United States and Canada are likely to release major economic events. In the global markets, the unemployment rate is considered one of the most significant indicators in measuring the economic health of the country as it leads to GDP growth and Inflation.

The commodity markets are dealing with a huge sell-off over the increased sentiment of the Fed interest rate in June. As we said in our previous update, Hawkish FOMC Vs. Dovish Fed Fund Rate, the policy statement remained hawkish. This is because policymakers played down the slower economic growth by emphasizing the improved labor market.

As a consequence, the precious metal Gold dropped more than 300 pips in two trading days. However, this wasn't the only reason behind the massive slump in prices.  Traders are also focused on Macron's (Pro-EU) great performance during the presidential debate against Marine Le Pen before the last round of the French Elections.

At this moment, the Gold is holding between trading levels. We are expecting a great deal of volatility during the New York session. I have two trade ideas for the Gold. 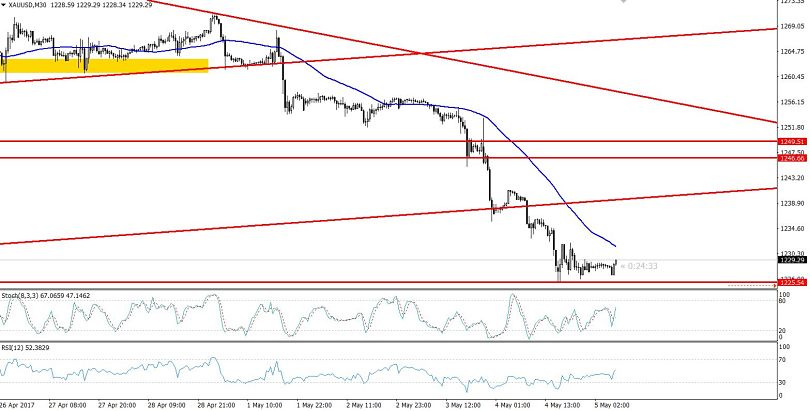 On the hourly chart, we can see the RSI peaking out of oversold territory. The Gold is following the same trading levels that we recommended in our previous update. The $1225 has extended a solid support to falling gold prices.

Today, the market is likely to fluctuate throughout the day. Even at the time of writing this report, the market is extensively volatile and the WTI crude oil has dropped more than 150 pips in the time span of 10 mins. Fortunately, our fresh forex trading signal on the WTI Crude Oil and Nikkei closed at take profits in the Asian session.

It's just the beginning of a big day. The game is yet to begin in the New York session. Keep following us for more updates and forex trading signals.

Forex Signals Brief for February 8: USD Resumes the Course After Powell Leaves It to the Data
20 hours ago