The bullion market has been dealing with low demand over the past few days as the investor's focus has been diverted towards the risky investments. The major sell-off was triggered over the sentiment of the Fed interest rate in June. In the previous week, the FOMC policy statement remained hawkish as Fed officials emphasized the improved labor market.

Moreover, the exceptional labor market figures from the United States are weighing on the Gold. As we discussed in our Forex Signals Brief May 8 – 12, the unemployment rate declined to place a 10-year low at 4.4%. The US non-farm payrolls rose to 211K for the month of April, beating the estimate of 194K for the month.

The uncertainty generated by French Elections don't exist anymore as the election results showed Macron winning a major 66% of the ballot whereas Le Pen secured 34%.

Investors are recommended to enter a sell position only below $1228 with a stop loss above $1232 and take profit of $1224/ $1221. We need to enter a lower trade volume as this trade seems to be risky due to thin volatility. 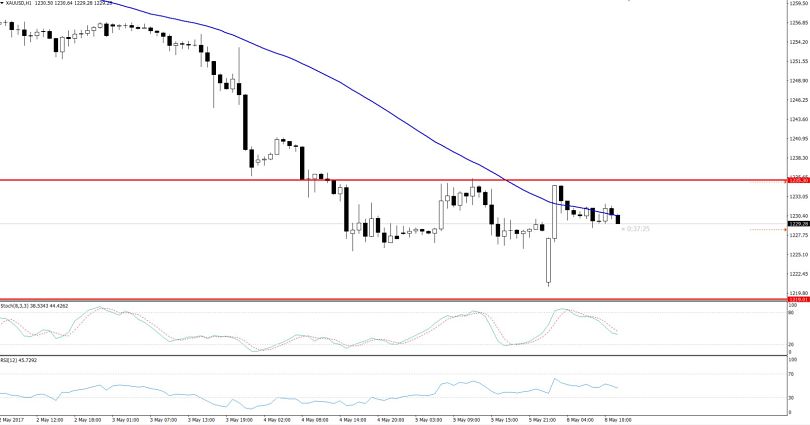 The bullion markets are highly non-volatile. This caused the Gold to stick in the narrow trading range of $1229 – 1235. On the 4-hour chart, the market has already managed to fill the early morning gaps. The gaps were pre-anticipated due to the French elections. At this point, the Gold is trading below 50 periods EMA at $1229 and is struggling to break below $1228 (support level).

In addition, both of the momentum indicators, RSI and Stochastic are suggesting a bearish bias in the Gold. For now, $1235 is a highly significant trading level and we may see a strong buying trend if the market breaks above this level.

Will We See A Deeper Retreat in Gold Ahead and After the FED, ECB?
3 hours ago