The 3rd week of May started with a bang as nearly all of our forex trading signals remained successful. The Nikkei, in particular, gave us two trading signals and both of these matured at take profit. The signal on WTI Crude Oil was also successful.

As discussed in our Forex Signals Brief 15th – 20th May, we are likely to have countless trade opportunities in the current week. This is because nearly all economies have several events happening this week that are important enough to cause price action in the market.

The U.S. dollar continued to trade under pressure due to the echoing effects of unfavorable inflation and retail sale figures released on Friday. Moreover, the weaker than expected U.S. manufacturing data also played its role in lightening demand for the greenback.

The Euro, as a single currency, edged higher due to a weaker U.S. dollar. As we know, the economic numbers released by the U.S. economy weren't as good as expected, specifically, the CPI and retail sales. The U.S. inflation came in at 0.2% versus the expected gain of 0.3% for the month of April.

The drop in U.S. inflation increases the odds that the Fed may reconsider their rate hike decision. This ultimately weakens the greenback and increases the demand for peer currencies.

We also can't ignore that the Euro is still a supported currency due to the French election results and Macron's victory.

Thankfully, our weekly forex trading signal recommended in Forex Signals Brief 15th – 20th May is likely to hit take profit level at $1.1000. Having said that, I would recommend traders wait for the market to close our earlier position. I may sell the EUR/USD below $1.1020 with a stop loss of $1.0450 and a take profit of $1.0965. 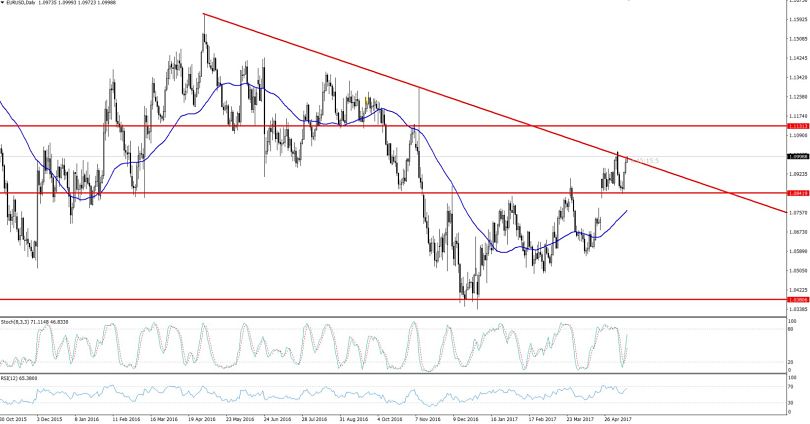 In my opinion, the best idea is to wait for the market to show us a clear signal. The breakage above $1.1030 is likely to lead the market towards $1.1130 and this can be a potential selling level in the upcoming days.

The sterling has finally made its move upward against the U.S dollar. It's not the strong pound, but rather the weaker dollar, which is dragging the currency pair upward.

In fact, GBP/USD remained under pressure after the BOE Monetary Policy Committee left the interest rate at 0.25%. On the other hand, the sterling exhibited major weakness due to a weaker inflation report by the Bank of England.

Today, the market is waiting for the CPI and PPI figures from the United Kindom as they are high impact economic events which may cause huge fluctuations in the market. 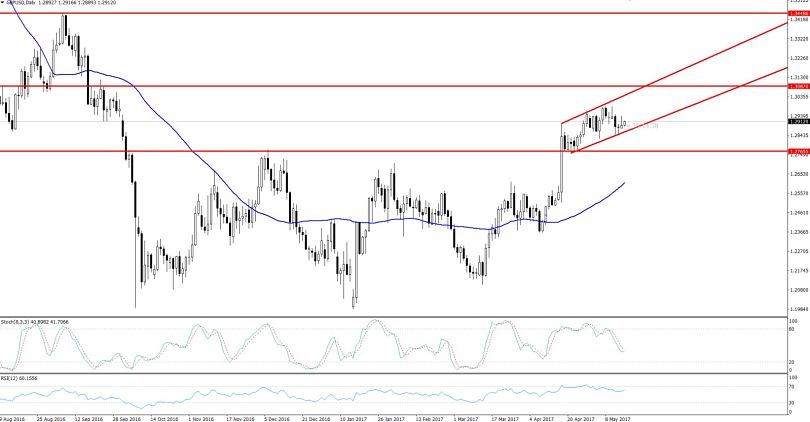 On the 4-hour chart, the GBP/USD has formed a bullish channel which is proving to be an intraday support to the sterling at $1.2880.

Zooming out of the daily chart clearly shows a bullish flag which is likely to break upward. Quite interestingly, the flag has formed above a triple top level of $1.2725 which is now working as a significant support level.

The momentum indicator RSI is still holding above 50, signaling a buying trend in the market.

The market is likely to remain volatile today due to several economic events which are set to be released from the Unites States and the United Kingdom. All we need to do is wait for the news and identify the right trading level to enter the market. Keep following, as we may have several forex trading signals today!

EUR/USD Remains Bullish Today AS ECB Presses on Strong Rate Hikes
15 hours ago
Can the BOE Keep Gilt Yields Under Control?
UK gilt yields reversed lower yesterday after surging for two months as the BOE intervened, but can they keep it under control
16 hours ago