Welcome back, traders. Hope you had an amazing weekend and are ready for the exciting trade opportunities this week. The U.S. dollar has been under pressure due to political developments – the probe into supposed links between Russian officials and the U.S. President Trump’s campaign team is likely to have its impact on the market. We will continue to observe the developments closely throughout the week.

In the meantime, we need to monitor the remarks from ECB President Mario Draghi ahead of the June 8th monetary policy decision. President Draghi is about to speak about the economy and monetary developments before the Economic and Monetary Affairs Committee, in Brussels.

Most importantly, we have a big trading opportunity on coming Friday as the U.S. Bureau of Labor Statistics will be releasing the labor market figures (NFP & Unemployment Rate). Economists are expecting mixed figures. We will talk about this in a lot more detail, but first, let's look at the major macroeconomic events ahead.

The EUR/USD traded in line with our earlier predictions discussed in Forex Signals Brief For 22 – 28 May. Over the previous week, the single currency Euro was the primary beneficiary of the buck's weakness. In response to which the pair appreciated 6.3% over 2017. This is not just due to the weakness in U.S. dollar, but also due to investors' shifting sentiment in regards to the ECB's monetary policy.

Economic conditions, such as inflation, manufactoring figures and labor market figures, are getting better in the Eurozone. 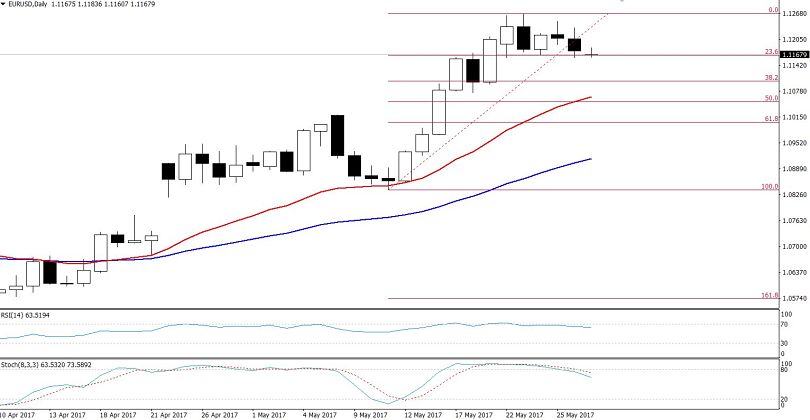 Taking a look at the weekly chart, the EUR/USD plunged dramatically in the 2nd week of May and formed a bullish engulfing candlestick pattern. This demonstrated investors'  intentions to stay on the buying side.

However, later in the 3rd week of May (previous week), the pair formed a Shooting Star candlestick pattern. This demonstrates that the number of sellers getting lower as compared to the number of buyers. This is a bearish reversal signal, but I see only one hurdle on the way to short selling, the triple bottom support at $1.1160.

I will be happy to sell the EUR/USD, but only upon the breakage of the particular support level of $1.1160. Breakage bellow this level will open further room for selling until $1.1095.

The Japanese Yen hasn't changed a lot compared to the buck in the absence of major economic releases, but this week will be important in defining the market's trend. USD/JPY remained range-bound in its previous trading range of  $110.850 – $112.200.

However, the pair's momentum is slightly bearish due to the weaker dollar which was a result on of the initial jobless claims which increased by 1K to 234K and the stronger Yen. Japan’s core consumer inflation rose for the 4th consecutive month. The core consumer price index (CPI) rose 0.3% in the month of April, followed by a 0.2% gain the previous month.

The gain in Japanese inflation is a success and gives off the sentiment that the Bank of Japan (BOJ) is getting closer to achieving its inflation goals. Ultimately, they are likely to keep their monetary policy unchanged (hawkish) which will strengthen the Japanese Yen.

The market hasn't moved a lot in the previous week, but this week it seems that it will be volatile. However, the trend is unclear and we don't know which way the fundamentals are likely to push the pair. Thereby, the rough idea is to have a buy call above $110.850, with a stop loss below $110.450 and a take profit above $112. 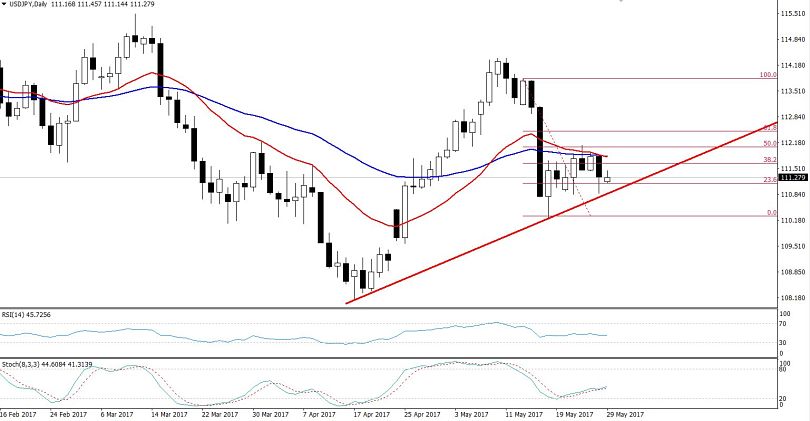 First – The pair has completed 50% Fibonacci retracement level near $112 and the same level is working as a strong selling level for USD/JPY.

Second- An ascending trend line on the daily chart is extending a strong support above $110.850.

We can enjoy the choppy sessions for now, but a breakout is likely imminent upon the release of Labor market figures from the United States this week.

Although the previous week was boring due to the lack of influential economic events, the case is likely to be different this week. Out of all the macroeconomic events, the ones from the United States and Eurozone stand out as they have the potential to give another push to the non-volatile market.

EUR/USD Retreats Below 1.05 After ISM Manufacturing Falls in Contraction
1 day ago