We just had an amazing bullish wave in the previous metal gold. Though I was waiting for it since yesterday, I, unfortunately, failed to catch it in time. The bullish price action was an amazingly good opportunity to grab.

1 – The gold prices rocketed to set a high of $1289 in the wake of fresh geopolitical tensions in the Middle East after Saudi Arabia, the United Arab Emirates, Bahrain and Egypt accused Qatar of backing terrorism and in response, cut their relations with Qatar.

2- Investors are also hiking their bets in the gold due to the Parliamentary Elections in the UK on June 8th. Theresa May, the U.K. Prime Minister, called for a snap election in order to strengthen her position in the negotiations with the European Union (EU).

There's no doubt that the support in the Gold was also due to the series of unfavorable economic events from the United States, including, the drastic Non-farm Payroll and Factory Orders.

At this point, adding a buying position at the highest levels is clearly not a good idea. Therefore, I'm looking to enter a sell position below $1292 with a stop loss above $1296 and a take profit of $1285. 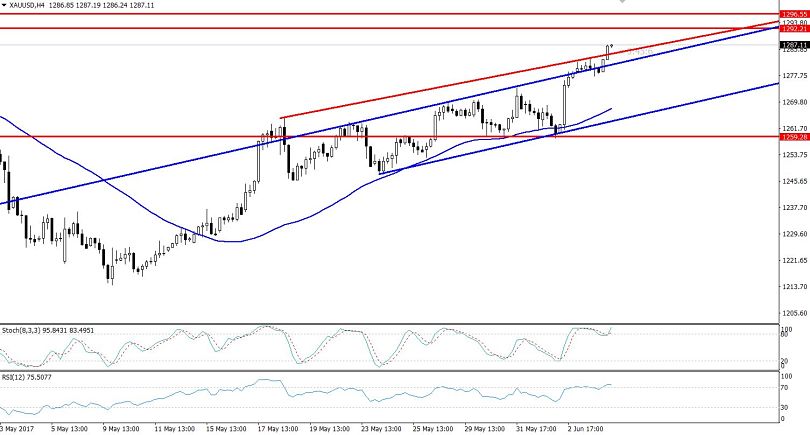 On the 4-hour timeframe, we can see a bullish channel starting at May 24th, at a low of $1247. This level was extending a significant hurdle at $1280/82. Nonetheless, today in the Asian opening, the precious metal came out of the channel, breaking the major resistance level of $1282.

Now, the metal is heading towards the next resistance level of $1292 and we can expect a retracement there. The RSI and Stochastic are in overbought regions above 70 & 80 respectively.

Beside this, gold is also likely to form a double top at $1292. A close below this level is likely to give us our sell position.