It wasn't a good day for the greenback as it continued to sustain losses against a basket of different currencies. The bearish momentum was urged on by a surge in both the sterling and loonie, after the central bank governors from both the Bank of England (BOE) and the Bank of Canada (BOC) proposed tapering the contemporary accommodative monetary policy measures. As discussed earlier, tapering refers to cutting down bond buying programs in order to decrease the money supply in the market.

Nowadays, the central bankers are switching their stance from a dovish policy to a hawkish policy. In other words, they are now reducing money supply in the market and strengthening their currencies against peers.

Today there are a lot of economic events on the table and most of them are expected to produce high volatility in the market.

EUR – German Prelim CPI m/m is due to be released at any time. There is an expectation of a 0.0% change, which is slightly better than the previous -0.2%. Similarly, the Spanish Flash CPI y/y is scheduled to be released at 7:00 with a forecast of 1.6%, lower than the previous 1.9%.  The CPI shows changes in the prices of goods and services purchased by consumers. The higher than expected figures are likely to boost demand for the single currency Euro.

US Final GDP q/q is expected to be released at 12:30 (GMT) with a neutral forecast of 1.2% (the same as before). GDP shows the annualized change in the inflation-adjusted value of all goods and services produced by the economy. The increased figure reflects more demand and increased demand is a signal of economic growth.

US Unemployment Claims is scheduled to be released at 12:30 (GMT) with a neutral forecast of 241K. Let's wait and see if there are any surprises before placing any position in USD pairs.

The single currency Euro continued to trade strongly bullish in the New York trading session on Wednesday. It got a further boost following the hawkish stance of the policy makers from both the Bank of England (BOE) and the Bank of Canada (BOC).

Investors switched their focus from the US dollar to other currencies. This is because the Feds have already increased rates, the dollar is already at the top edge aginst other currencies and most importantly, the other economies have yet to increase interest rates.

Previously, the EUR/USD traded exactly as we recommended in our previous update – it showed a buy right after retracing closer to $1.1285. For now, $1.1400 is a definite trading level. The trade idea is to short sell below this level or go long above $1.1410. 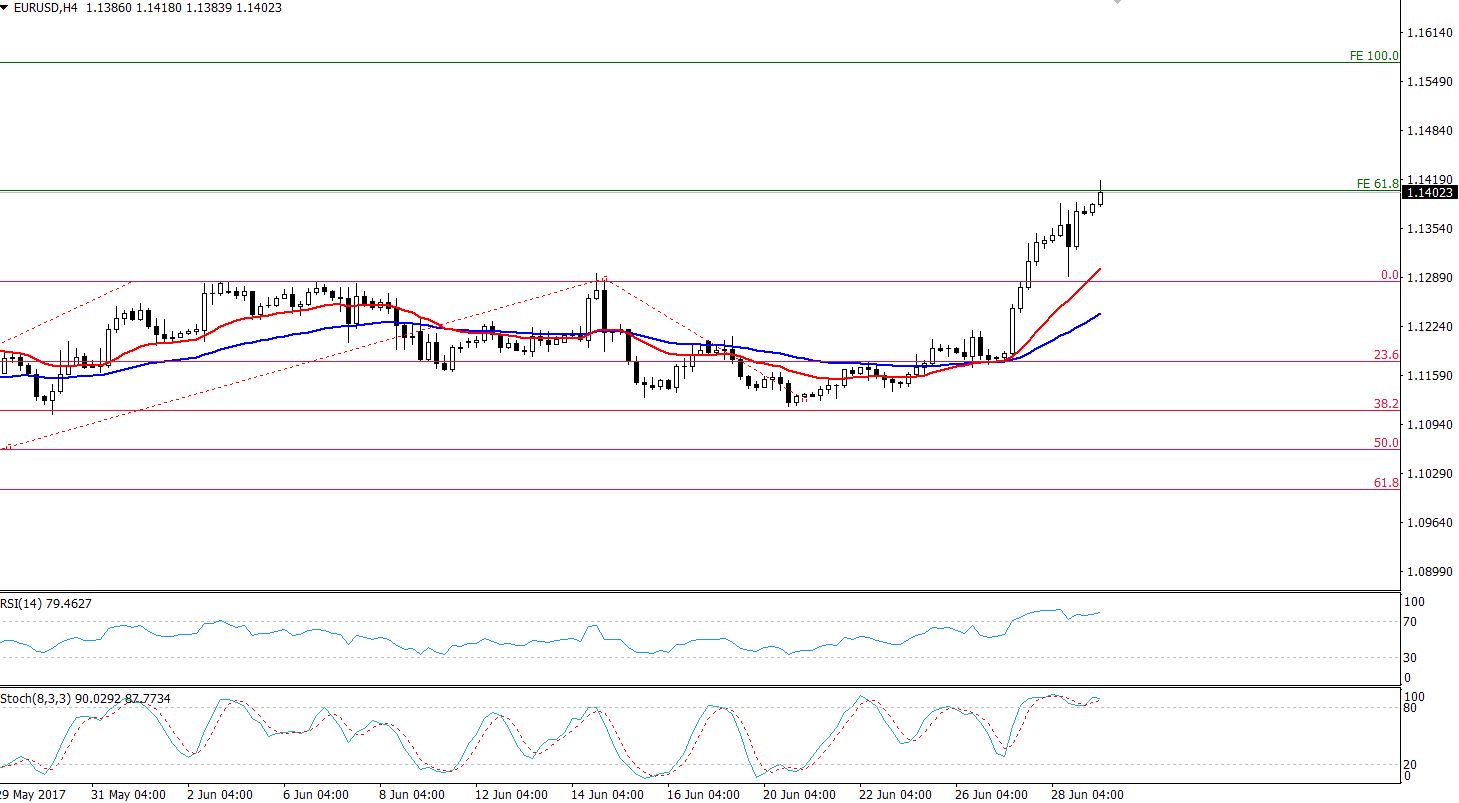 The pair has already completed the 61.8% Fibonacci expansion at $1.1398 and breakage above is likely to push the market towards $1.1560 until next week.

So far, the current week has been very volatile and it seems to be continuing to trade this way. We may encounter another round of volatility in the US trading sessions, especially with the release of Gross Domestic Product and Unemployment Claims from the United States today.

I'm really excited to share that we are consistently increasing the number of instruments in order to accommodate our followers at its full. Aside from gold & crude oil, we are about to add more instruments such as CryptoCurrencies. Stay tuned for astounding analysis & forex signals!