Morning traders. Welcome to the new month of July. The first week of July is definitely important from a fundamentals standpoint as the United States will be releasing two important economic events, the Non-farm Payroll, and Unemployment rate. However, liquidity will be low due to the US Independence Day holiday on Tuesday which will support the risk of choppy trading in the market.

Additionally, remarks from the central banks will be pivotal throughout the week following the shift in rhetoric observed last week. This week, investors are likely to pay close attention to comments by the Bank of England (BOE), European Central Bank (ECB) and Federal Reserve (FED) speaker. The comments will help traders determine whether to in order to accept or reject the new monetary policy expectations formed last week.

US Labor Market Reports – First things first, investors will be anxiously awaiting the US labor market report which will be released on Friday, July 7th at 12:30 (GMT). The NFP is expected to release at 175K, which is better than the previous figure of 138K. Therefore, the investors are likely to hold the US dollar before the release on sentiments. However, before this report, we need to monitor the ADP employment report which is due to be released on Thursday at 12:15 (GMT).

US Fed Monetary Policy Report – Fed meeting minutes are due to be released on Wednesday, July 5th at 18:00 (GMT). All we need to see is the degree of confidence of Fed officials over the inflation growth in the future. The comments on the balance sheet (tapering the bond buying program) is likely to be the major focus. We also have the semi-annual monetary policy assessment from the Federal Reserve which will be released on Friday, July 7th. The statement will be followed closely for additional signs about the expected Fed policy over the second half of 2017.

G20 Meetings – The summit will be held in Germany on July 7th and 8th. The officials from 20 countries are due to meet about a broad range of issues relating to global economic growth, international trade, and financial market regulation, in Hamburg. Let's wait to see the outcome of the meeting between Donald Trump and Russian President Putin, keeping in mind the security concerns and all the geopolitical tensions going on in the market.

Crude Oil Inventories – The Energy Information Administration is scheduled to release the crude oil inventories on 15:00 (GMT), however, the expected figures are not given at the moment. I will keep you posted about the latest developments and expectations over the week. So, make sure to keep updated.

Overview Of The Forex Majors

Over the previous week, the EURUSD has made a bullish breakout from a 5-week range and managed to close outside the range, signaling investors' bullish sentiment. A major catalyst was ECB President Mario Draghi who sounded quite hawkish and led investors to believe that monetary policy is likely to be tightened earlier than anticipated.

Earlier, the investors were focusing on the Fed rate hikes sentiments but later the markets shifted their attention to the ECB. The Fed meeting dominated, helping the Buck gain against peer currencies but later Draghi played his role to support the weakening Euro.

Technically, the pair has come out of a $1.1100 – $$1.1285 trading range on the upside, signifying investors' bullish sentiment. The moving averages are also supporting the bullish bias, but the momentum indicators are in the overbought region. This means we can see the correction in the EUR/USD bullish trend before fresh highs. 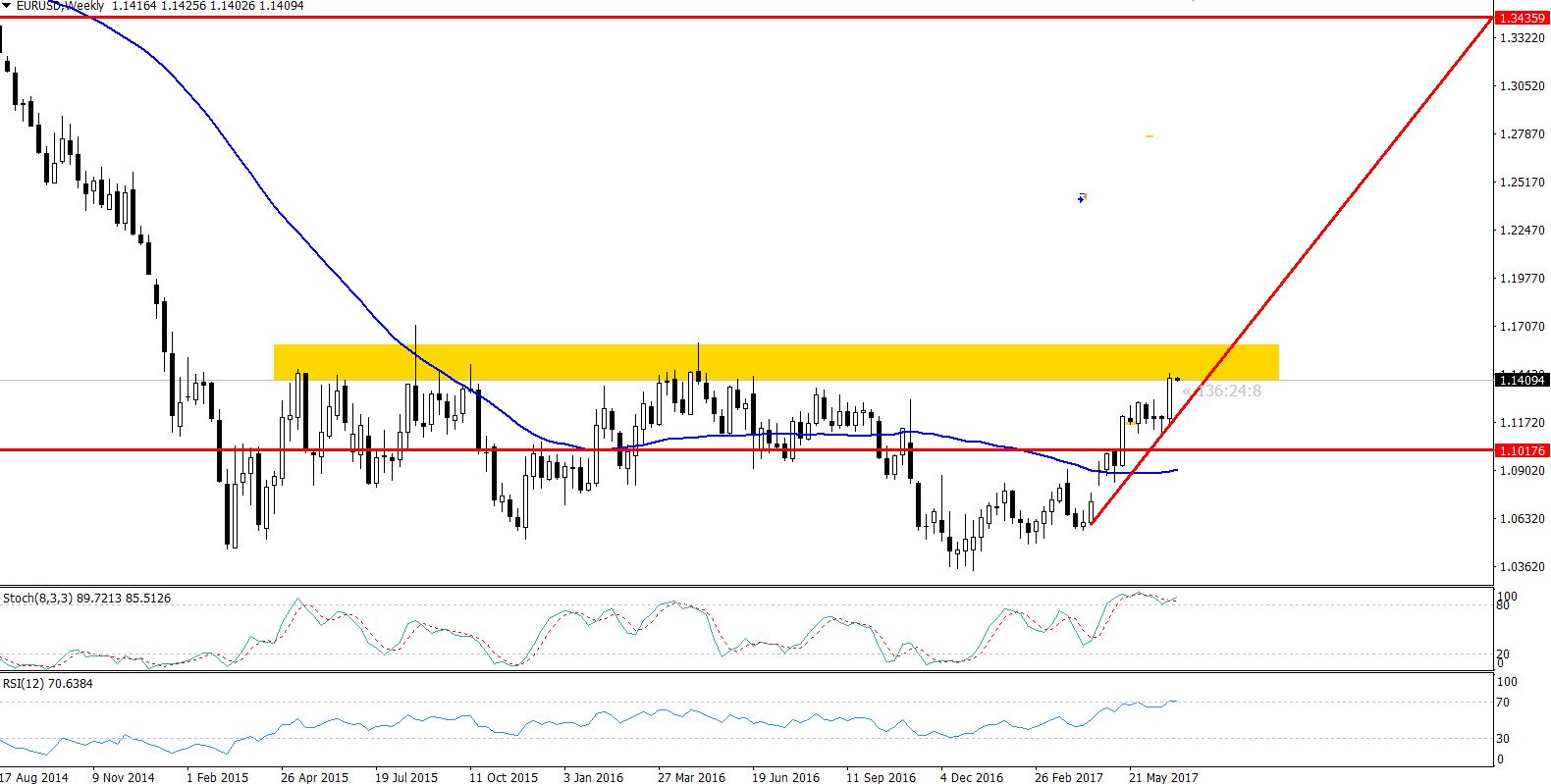 The Japanese Yen and Buck are consolidating in a narrow trading range of $111.750- $112.850. The currencies are having a solid competition. Investors seem neutral and unable to decide which currency to hold.

Technically, on the daily chart, the pair is holding right above 50- periods EMA which is extending a solid support at $111.560. On the same timeframe, we can see that the pair has stuck in the narrow trading range and has formed multiple neutral candlestick patterns such as Doji and spinning tops.

On the daily time frame, the RSI isn't that bullish or bearish, rather, it's nearly neutral as most investors might be looking for additional fundamentals to decide the direction of a breakout. It's possible this will only happen after the release of US economic events this week. 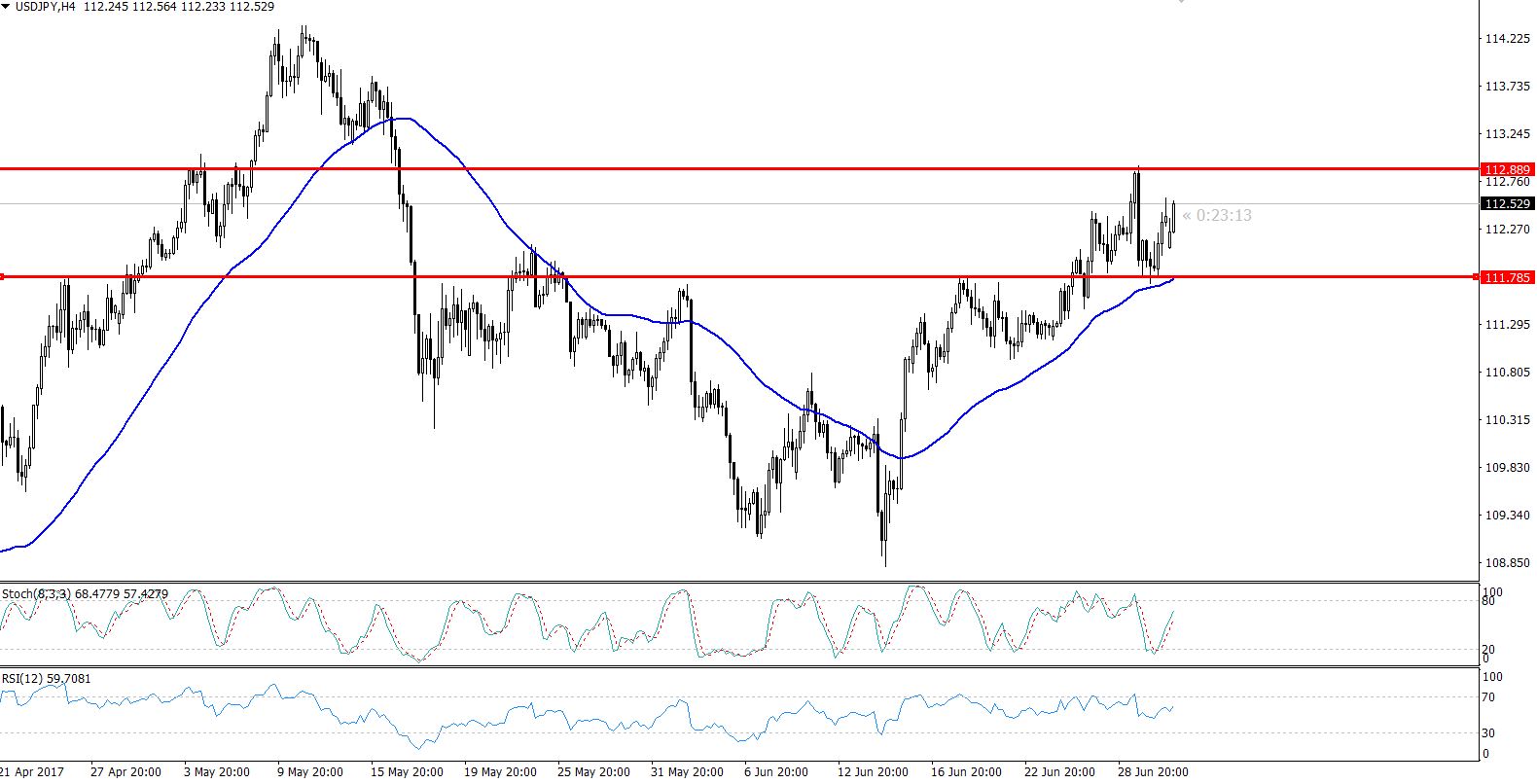 Over the first week of July, investors are likely to trade in a choppy fashion until the release of major events on Wednesday and Friday. However, there may be a slight trend before the news release, so we should try and capture a few pips before Friday. Later we can go with the flow of the market. Keep following us for live market updates and great forex trading signals this week. Good luck!

I'm really excited to share that we are consistently increasing the number of instruments in order to accommodate our followers at its full. Aside from gold & crude oil, we are about to add more instruments such as CryptoCurrencies. Stay tuned for astounding analysis & forex signals!