Happy Friday my friends, what a great week! Our trading signals have been performing quite well. Today, I'm beginning my day with a bullish dollar sentiment due to better than expected fundamentals.

– U.S Unemployment Claims were released at 247K, slightly higher than expected 245K, but this only had a muted impact.

– Fed Chair Yellen maintains a balanced tone but failed to give a timeline for the next rate hike.

It seems like a U.S day today, as everything on calendar belongs to the U.S. Let's take a look:

– The U.S Bureau of Labor Statistics is due to release the CPI and Core CPI at 12:30 (GMT) with a positive forecast. CPI (Consumer Price Index) shows a change in the price of goods and services purchased by consumers. The key point is that if the figure is higher than previous one, it means U.S citizens have increased the demand for products.

So do you think we can increase the demand for things if we are unsure about economic conditions and the labor market? Definitely not. Thus, an increase in the CPI is a good measure of economic growth.

– At the same time (12:30 GMT), we will see Retail Sales and Core Retail Sales data which are expected to be higher than the previous figures.

– 45 minutes later, the FED will release Capacity Utilization Rate and Industrial Production. Both of these are also expected to be higher than the previous ones. Don't be surprised if oil prices soar on the positive release because the investors will form a sentiment of high demand from the world's top oil consumer in the future.

The precious metal traded sideways with unclear directions with the lower boundary of $1216 and the upper boundary of $1224. The greenback played defensively against its peers during the New York session, however, there was choppy trading against the Euro. Therefore, we haven't experienced a lot of fluctuation.

Yesterday, the Fed Chairwoman Janet Yellen had another testimony, along with a couple of FOMC members. However, this time she wasn't  able to move the market. Actually, I was expecting an additional rate hike as well as the tapering of the balance sheet. But, she continued with the balanced tone.

Get ready for breakouts today, particularly on the release of Inflation figures in the U.S sessions. Only enter the market if there is a very strong signal.

FX geeks are recommended to watch $1218, the crucial trading level for today. Below this, the gold is likely to stay bearish with a target of  $1208. But, stay tuned as we will be sharing updates regarding market trends. 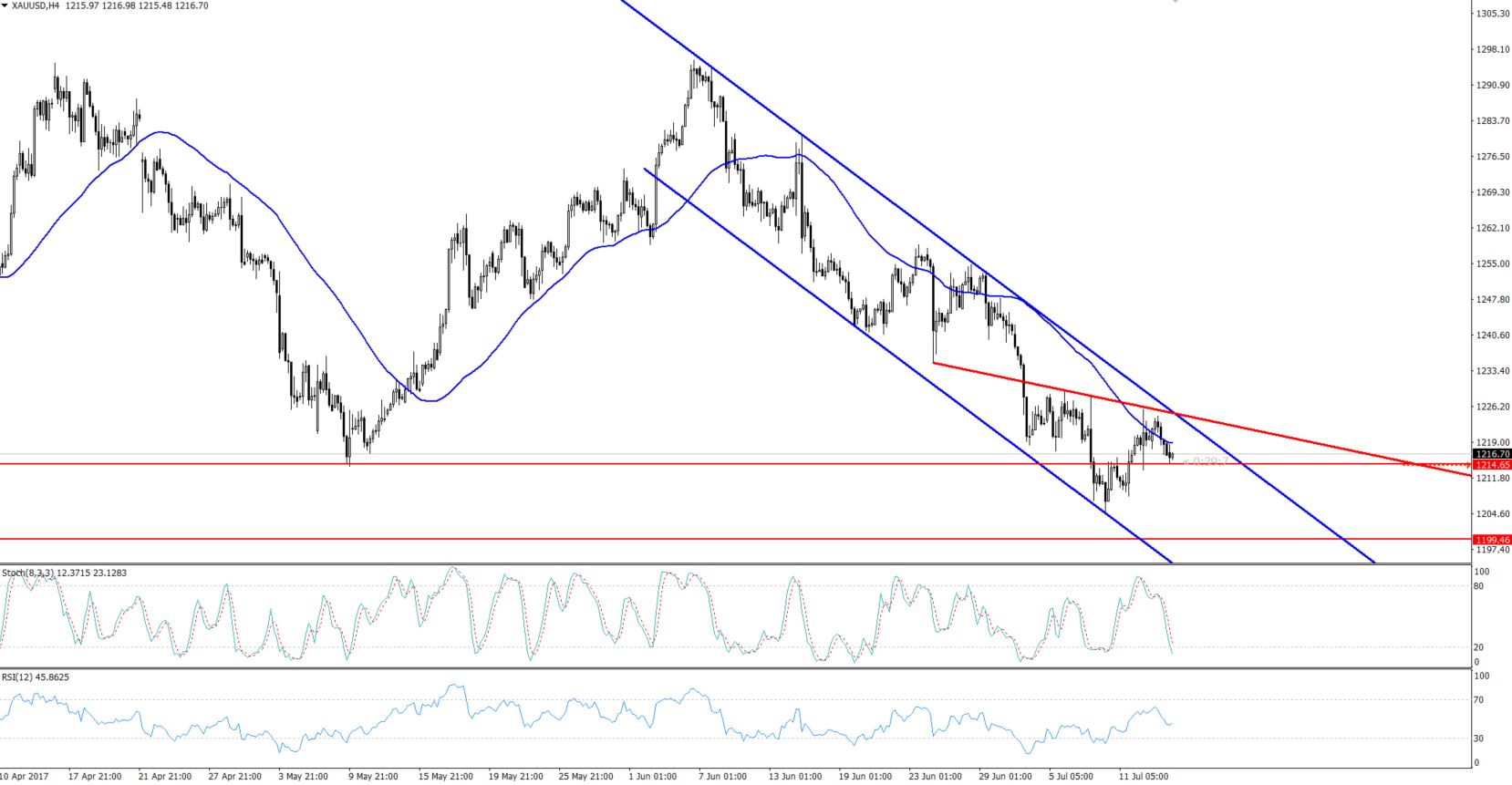 The outlook for Gold hasn't moved much and it's trading exactly in line with our previous analysis. Just a few updates, on the 4 hours chart, gold prices have fallen below the 50 periods moving average at $1218 along with momentum indicators below 50. This signifies a selling bias for investors.

But wait, it's also struggling with $1214, a major hurdle on the way to $1208. So, we are not open to selling right now and have to wait for upbeat economic figures from the United States to take our sell.

Forex maniacs across the borders are sitting tight awaiting major economic releases today, particularly, the ones in the U.S trading sessions. Well, if you want to trade gold profitability, I suggest you check out the FX Leaders article on gold trading. Good luck and be careful!