Happy Friday, traders. Today, the US dollar is playing defense after falling to a multi-month low and putting selling pressure on Gold. This was anticipated, that's why we entered a sell signal early in the Asian session. As discussed in the July 27th – Major Trade Setups For US Session update, the gold already hit the suggested targets of $1256. Let's see what we have in the line-up for today.

The economic events from the United States and Eurozone are dominating the market today. Let's take a look:

EUR – German Prelim CPI m/m is forecasted to remain unchanged at 0.2%. The time of release isn't specified but we can expect Destatis to release it during the European session.

At 7:00 (GMT), the Spanish National Statistics Institute is expected to release Spanish Flash CPI with an increased forecast of 0.9%, compared to a previous figure of 0.8%.

CPI (Consumer Price Index) shows a change in the price of goods and services purchased by consumers. The key point is that if the figure is higher than previous one, it means European citizens have increased the demand for products. That only happens when they have jobs and they are confident about thei economic conditions.

The GDP figures are also in the spotlight.

CAD – Statistics Canada will publish the GDP m/m at 12:30 (GMT) with a forecast of 0.2%. Comparatively, this figure is more important than the Spanish GDP. This is because Canada has its own currency while the Euro is impacted by the fundamentals of several countries.

USD – The most important event of the day is the U.S Bureau of Economic Analysis release of release Advance GDP q/q along with Canada at 12:30 (GMT). Economists are expecting a sharp increase up to 2.5%, which is much higher than previous 1.4%.

Traders, feel free to refer to FX Leaders news trading strategy article, which is especially relevant to the events today. Using some of the tips in the article, let me share a trick to trade the news today.

The United States and Canada are both releasing the GDP at the same time. It's possible that one releases a positive GDP while the other comes up with a negative.

Let's say, the Canadian GDP is negative while the US GDP is positive, we are going to see a sharp rise in the USD/CAD. Keep an eye on it as it could move nearly 100 pips on the news.

Gold – XAU/USD- The Metal with a Faded Shine

The precious metal has traded dramatically to place a high near $1265 and fell below it to hit another target of $1256 (discussed in US forecast update). Unfortunately, though, it kicked us out at the stop and reversed right afterward.

The Federal Reserve monetary policy statement was in line with our forecast since it left the interest rates on hold. Moreover, the central bank found the gains in the labor market to have been solid since the NFP report for June. But, inflation figures didn't go as expected, which boosted sentiment for the dovish statement.

The balance-sheet reduction program will be starting relatively soon and the expectation is that the interest rates will continue to rise.

The technical outlook is quite clear. On the 4-hour chart, gold prices are still consolidating above 50 periods moving averages at $1258 along with momentum indicators above 50. This signifies investors' buying bias. 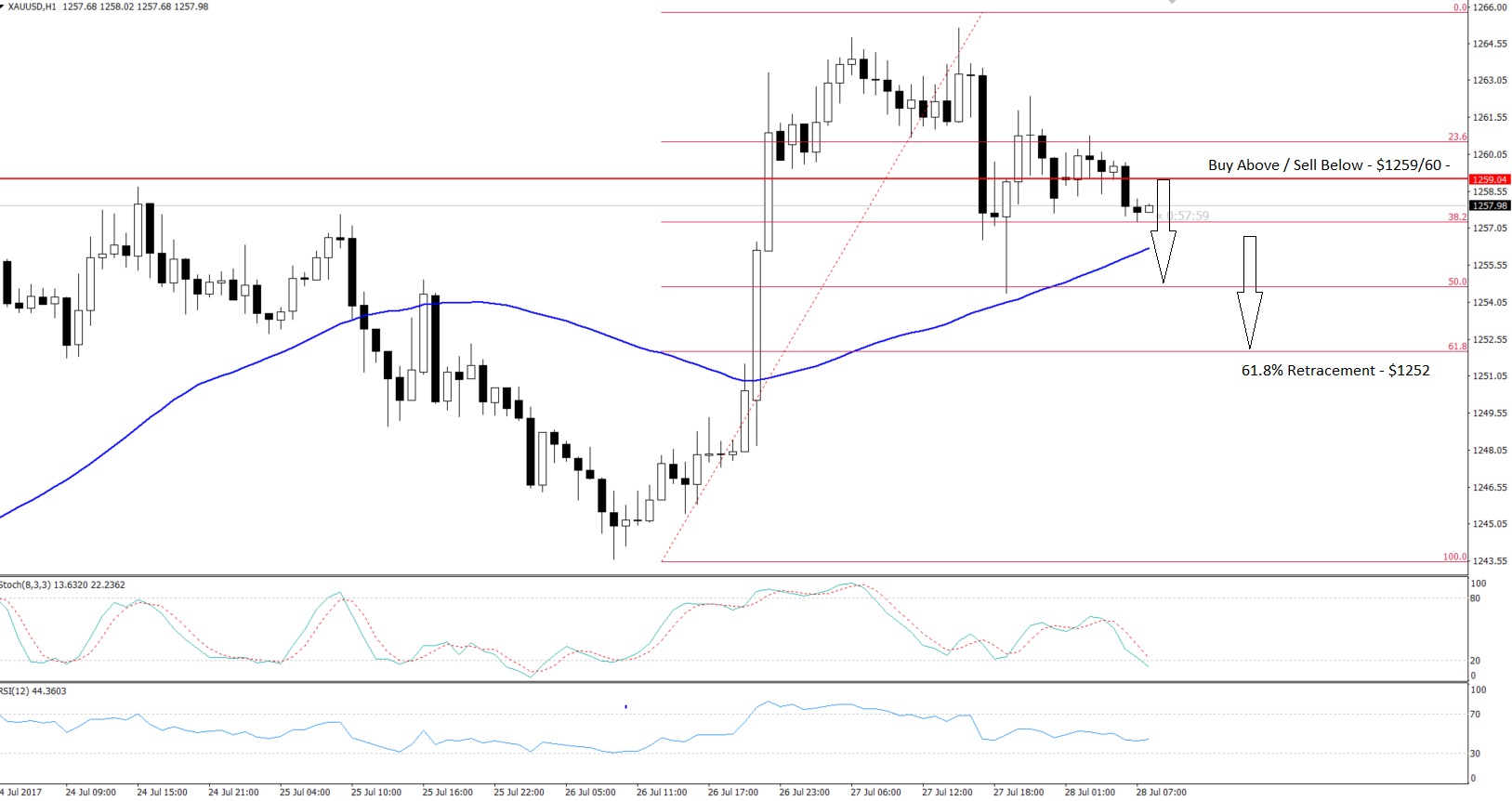 Zooming out to the hourly chart, the metal has completed a 50% Fibonacci retracement at $1254 and it may go for $1252, the 61.8% retracement. Still unclear about Fibonacci levels? No worries, check out our FX Leaders Fibonacci trading strategy article to avoid making a wrong trade.

Refer to below trading levels for further help. To get a better understanding of the levels check our very helpful support and resistance trading strategy article.  Good luck guys & trade carefully!