RBA Preview – Are We Going to Get a Rate Hike? - Forex News by FX Leaders

RBA Preview – Are We Going to Get a Rate Hike?

It's RBA day in Australia and traders are turning their attention to whether or not August is the month for a hike in interest rates.

Recent talk from the RBA suggests they are in no hurry to hike rates and it appears they will do it at their own pace and not be influenced by other Central Bankers.

Janet Yellen and Mario Draghi have continued to talk up the likelihood of interest rate increases, however, in Australia, the situation is a little different.

I don’t think we’re going to get a rate increase this month and there are a few reasons why:

The RBA wants a weak dollar

There’s good reason Governor Lowe and the RBA continue to talk down interest rate increases. They don’t want a dollar trading at 80 cents.

Had Governor Lowe talked up chances of a rate increase like his US and European counterparts, then the AUD would be well above 80 cents already.

Sydney and Melbourne are in the grips of a housing boom. In the last five years, home values have more than doubled. However other states like WA and the Northern Territory and going the opposite way.

To counteract the boom, Australian banks have started raising interest rates out-of-cycle with the RBA in a bid to slow down lending to housing speculators.

As such, a big part of the RBAs job has already been done by the banks.

There are a few things to consider for today’s announcement.

As it stands there’s a 99% chance that rates remain on hold at 1.5%. Any change upward would strengthen the AUD, however, I feel that is unlikely.

More interestingly for traders is to watch for the statement and look at how the RBA are positioning themselves going forward. 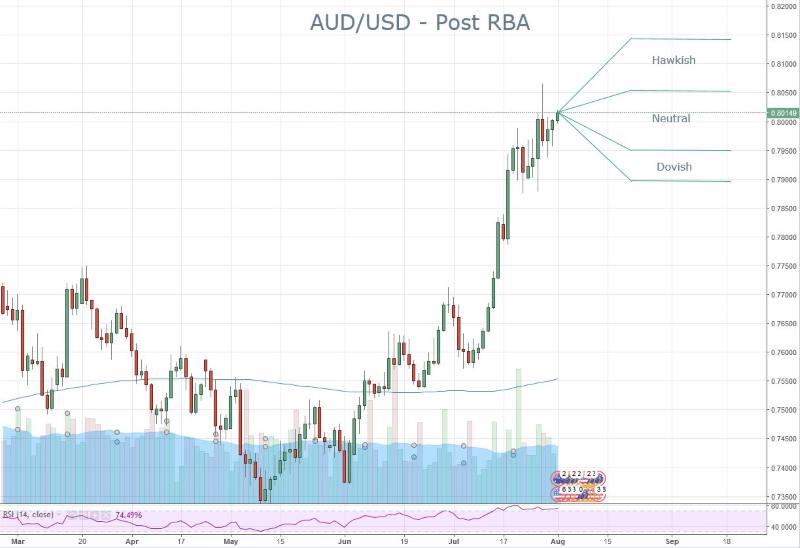 Any hint of a hawkish sentiment is unlikely, given the way in which the RBA has been doing their very best to jawbone the currency lower. If there’s any hawkish surprise a rally above 81 cents is possible.

This is the most likely scenario and I expect the same company line that the RBA has been rolling out recently. The AUD has been bid up in early trade so a neutral statement might lead to a sell off under 80 cents.

It seems unlikely the RBA would suggest anything along these lines, however, they are sure to try and pour cold water on the AUD.