We were surprised by the very drastic change in the market during the Sydney session. The stock plunged dramatically and gold soared sharply, adding more than 125 points. What is driving the market crazy?

Everything started after U.S. President Donald Trump's remarks. He commented, speaking about North Korea, that any threat to the United States would be met with “fire and fury”, shocking the global financial markets.

The spokesman for the Korean People’s Army added fuel to the fire by declaring that North Korea was “carefully examining” plans for a missile attack on U.S. Pacific territory, which has a big U.S. military base.

In response to this back and forth, global investors switched their investments from the stock markets to the bullion market, such as gold & silver, in order to try and defend against the uncertainty the situation caused. Let's keep our fingers crossed, if Trump responds to North Korea's remarks, we may see another round of volatility in the market.

At 21:00 (GMT), the RBNZ is scheduled to release the Official Cash Rate. Though the central bank isn't expected to change the rate from 1.75% (previous), the RBNZ Rate Statement and RBNZ Monetary Policy Statement will be worth watching.

At 22:00 (GMT), the RBNZ will conduct a Press Conference. Previously, the RBNZ and Governor Graeme Wheeler have tried to talk down the Kiwi. Because of that, many traders will look closely at the central bank’s tone this time.

Inflation – A few months ago, the RBNZ had foretold that the sudden increase in inflation was transitory. Nevertheless, New Zealand inflation figures also underperformed in the second quarter of 2017.

Yet, the overall growth in Q2 2017 was still greater than readings in Q1 2017. Should we expect a hawkish tone from the bank? I don't think so, but still, let's wait and see.

As I mentioned in my earlier update Forex Signals Brief August 8th, NZD/USD continued its bearish momentum and hit our 60 pips target at $0.7335. Now, it's gained a support at $0.7300. 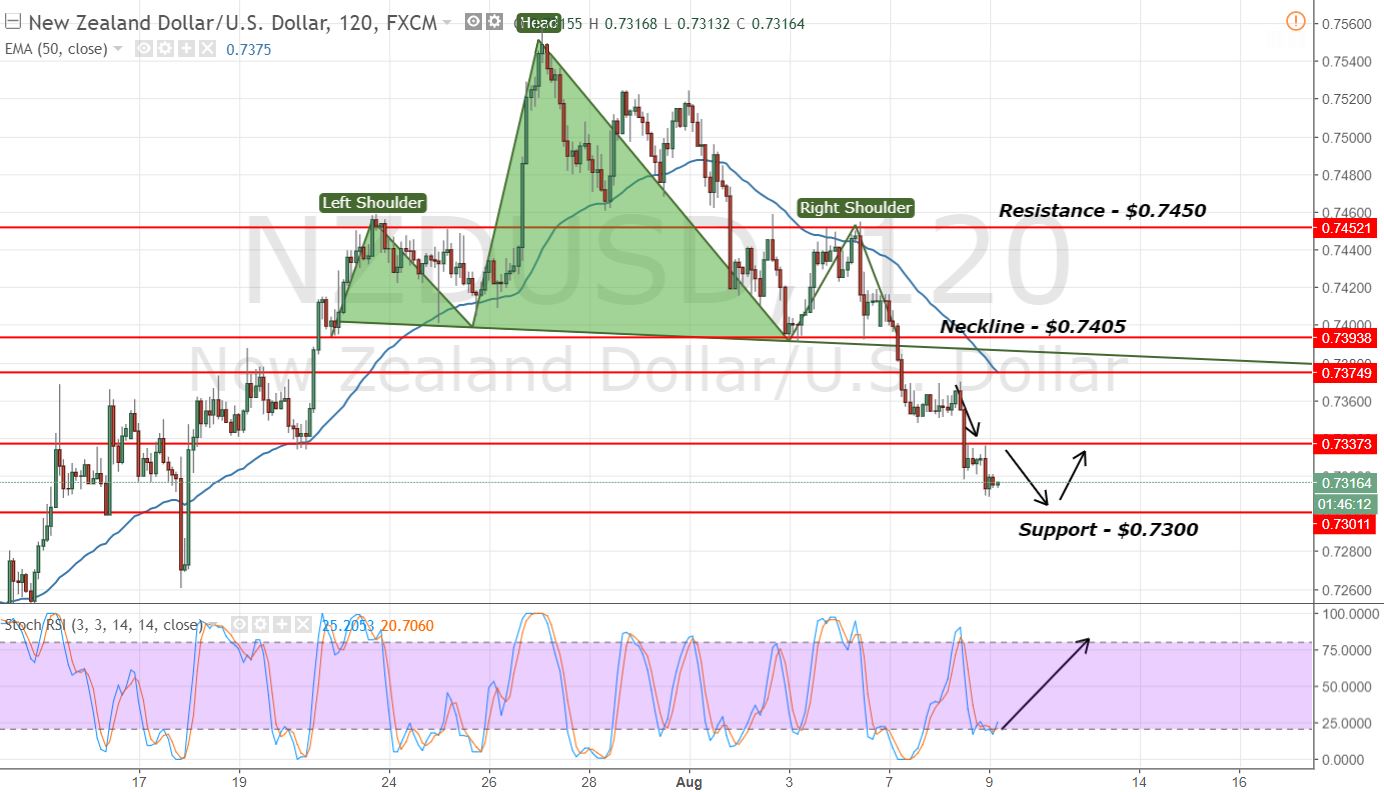 All this began with the breakage of the neckline support at $0.7400 and so far the market has dropped nearly 70 pips. At the moment, the pair has entered the oversold region. Sellers will be hesitant to enter the market until it completes its correction.

Frankly, entering any trade in New Zealand currency pairs won't' be a good decision. Though technically, $0.7340 is a level below which selling seems safe.

Summing Up: The market is highly volatile, thanks to North Korea & the United States. However, it's likely to remain volatile due to the release of RBNZ monetary policy. Stay tuned for updates and trading signals. Good luck!

Forex Signals Brief for May 17: Elon Continue’s to Hit Bitcoin
1 hour ago

Buying the Pullback in USD/JPY, Despite the Soft US Retail Sales in April
14 hours ago