As we saw overnight, strength is coming back into the USD in a big way. Now that tensions appear to be on hold (for the time being) between US President Donald Trump and North Korean leader Kim Jong-un, investors feel much better about holding USD.

Earlier I spoke about the potential for the USD/JPY to retrace and find its way back to 110.000. Well it didn’t take all that long for that to happen and now that we’ve moved through that level and held, we need to reevaluate where the Yen might go next. 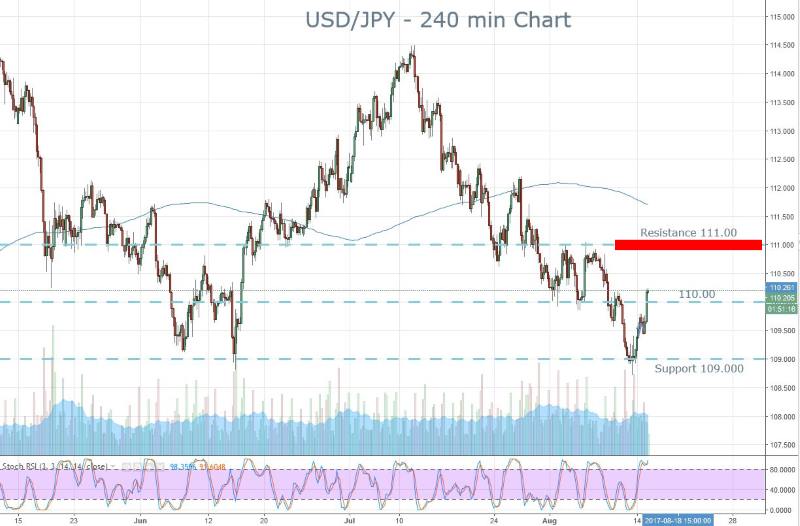 I think the next obvious level that we have to start looking at is 111.000.

Taking a look at the 240 minute chart we can see how clearly the round numbers are in play on the the USD/JPY. Price continues to get sucked towards those areas. Now that isn’t likely to happen today, but as the week unfolds it's clear that the momentum is now to the upside.

It’s been a similar story in equity markets, with the Nikkei in particular being one of the strongest performers. The Yen moves inversely to the Nikkei as the Japanese economy benefits greatly from a weak currency that boosts the profits they receive on their exports.

This momentum along with USD strength, should hold the USD/JPY in good stead and I would be looking to ride this momentum in the coming days. Hopefully we get some follow through as US and European traders enter later on Tuesday.

Later in the trading session with have industrial production figures which have the potential to slow things down – however that might also provide a good opportunity for a pullback for traders looking to get long.