It’s a huge day for Euro traders! We are expecting key data to add more fuel to the FOMC fire that kicked off yesterday.

If it feels like the rug just got pulled out from under the USD that's because it did. After finally regaining its footing following the North Korean saga, the FOMC once again came in and smacked the dollar back down.

The gist of the minutes was that the Fed expects the economy to struggle to reach its 2% inflation target. That’s bad news for USD bulls as it means that the Fed’s plans to raise interest rates in the later half of 2017 might be put on hold for the time being.

For traders that meant a broad rally in the majors versus the USD just when it felt like we were able to start relying on some strength in the US currency.

Today in Europe, CPI data will be front and center along with the minutes of the last ECB meeting. Both have the potential to light a fire under the EUR/USD or send it back to key support at 1.1700.

British Retail Sales data is due out at 08:30 GMT and predictions are for a 0.2% increase MoM compared to 0.6% in the previous month. A better than expected retail sales figure indicates that the economy is improving and that consumers are spending money. That also helps boost CPI, which is a measure of consumer prices.

Eurozone CPI is due for release today at 09:00 GMT and analysts are predicting that it will come in at 1.3% YoY, which is the same as last month. CPI is a key figure for FX traders. It gives an indication as to whether or not Central Banks are able to raise interest rates.

The ECB aims to target an inflation rate of 2% in the medium term and CPI is a good gauge of the level of inflation.

The minutes of the last ECB meeting are due to be released today at 11:30 GMT. This is an account of the July meeting.

If you recall, the ECB chose to leave rates on hold at their last meeting. This time around there should be considerable interest in explaining what the thought process was by Mario Draghi and t e governing council. Keep an eye out for the future of QE and their thoughts on a rapidly appreciating Euro.

The Philly Fed is due for release at 12:30 GMT and analysts are predicting a slight decrease from last month at 18.5 versus 19.5 the prior month. The Philly Fed is a gauge of manufacturing in the US. A stronger than expected figure suggests that economic activity is improving and is bullish for the USD.

It’s a busy day on the data front. Traders also need to keep an eye out for the Eurozone Trade Balance, German WPI, French Unemployment, Jobless Claims in the US and Industrial Production. While these won’t have the impact that the other data releases will – make sure to be aware of them.

Prior to the release of the FOMC, the Euro was looking decidedly bearish. That price has tested 1.1700 a number of times and could have easily broken to the downside should the FOMC update have been marginally different. However the Fed wasn't happy with inflation and the USD took a hit, so, for now, the momentum is to the upside. 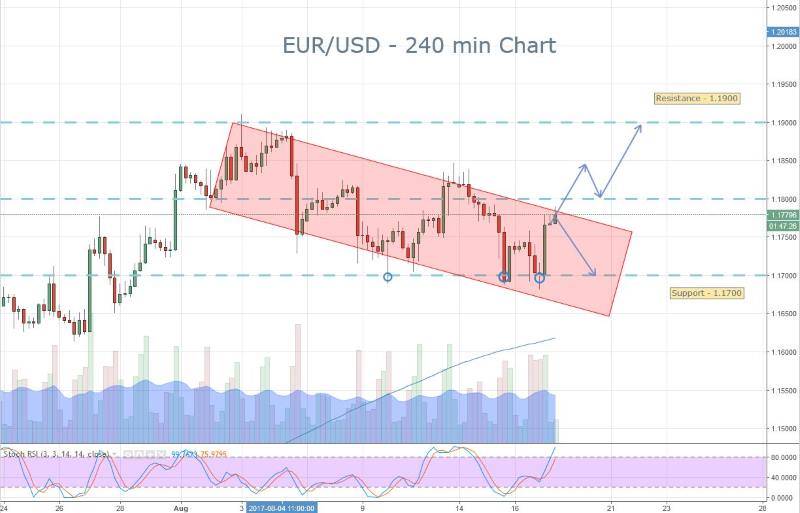 We are still entrenched in a downward channel and right now we are at a key area. The CPI data today along with the tone of the ECB minutes are going to be the determining factors in how the EUR/USD trades today.

If we can add to the momentum from the US session then we are going to see a break of upper resistance at 118.00 and a move back to the highs. That means we have the potential to retest longer term highs and regain the uptrend. In this case, I would look to buy a pullback above 1.1800.

Bearish data is going to drag us back into the channel and we will be focused on using 1.1700 as support. I’d get short and use 1.1700 as a target to take profits as we’ve seen it hold up as a support level on three occasions recently.

Best of luck with the trading day!