U.S. equities have shown a bit of life early on this week, setting up a potential long trade. So far the news out of the Yellen/Draghi summit in Wyoming has been muted. Holding a position during events that can fundamentally move the market does add some systemic risk.

Of course, the added volatility may also work in our favor.

Earlier this morning, the U.S. Housing Price Index (MoM, June) was released. It came in at 0.1% under expectations of 0.4% and the previous release of 0.3%. The low number may be interpreted several ways, but in the aggregate, it is negative.

U.S. housing prices are an indication of consumer sentiment and also the commercial lending atmosphere. When home prices are stagnating, it is not a good sign.

Early on in today’s session, U.S. equities are looking strong. 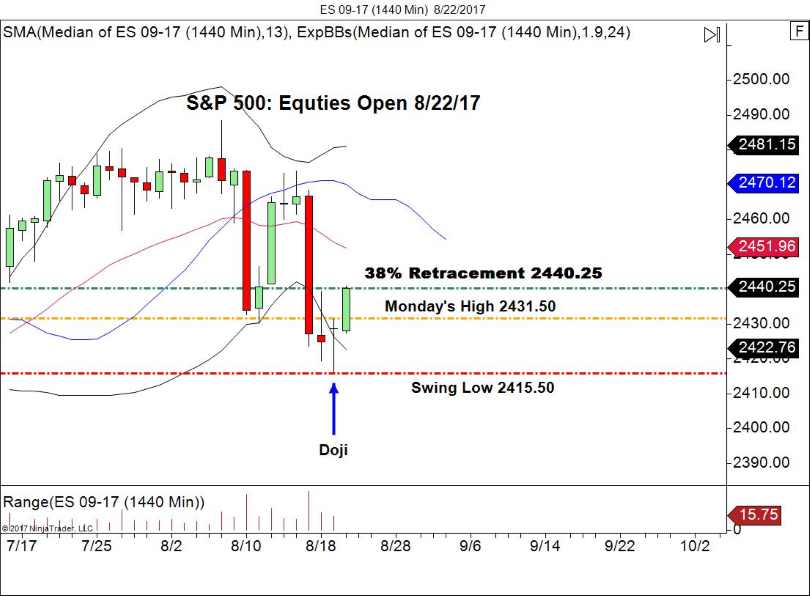 Bottom Line: As of now, the E-mini S&Ps are testing the 38% retracement level at 2440.25. This market is poised to turn the corner, so today’s session is an important one. If it goes, we may see a considerable rally in the S&Ps.

Unfortunately, this bullish run on the open has taken a few trades off of the table. I will be looking to buy pullbacks with an intraday long bias. This can be done from the 38% level of the ongoing intraday range.

Remember, if you are going to buy intraday pullbacks, watch the R/R and keep the stops reasonable. There is no sense losing the ranch from secondary trade locations!