Trade Opportunity In The USD/CHF - Forex News by FX Leaders

Trade Opportunity In The USD/CHF

The market has shown restraint towards safe havens in the midst of more provocation from North Korea. Thus far in the U.S. session, we have seen a sell-off in gold and moderate strength in the U.S. equities indices.

The USD has been getting tossed around a bit across the majors but has hung in there against the Swiss Franc. Let’s take a look at a potential trade idea facing the USD/CHF for the rest of the session.

Today has seen a selloff and moderate retracement from the USD/CHF. Geopolitics coupled with this morning’s economic data releases have brought an area of formidable support into play. 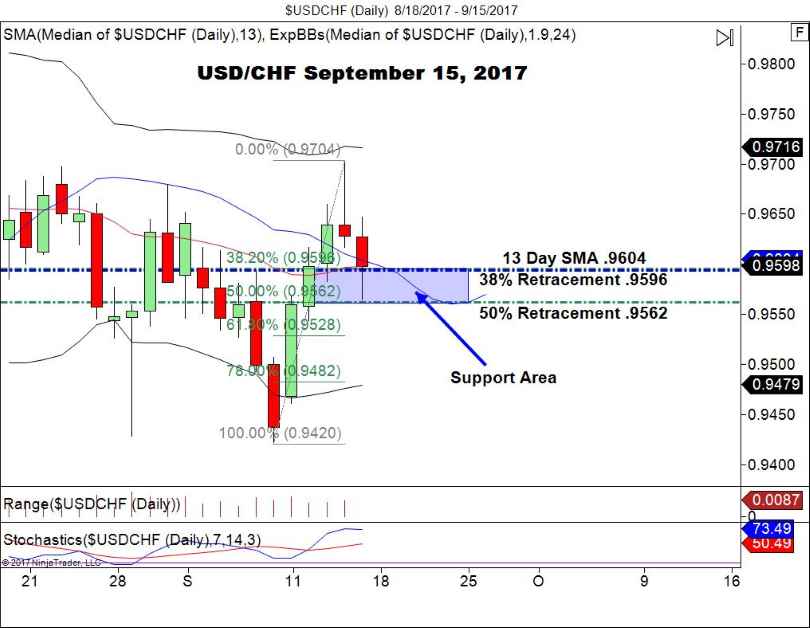 The technicals seem to be valid facing the USD/CHF on the daily timeframe. Here are a few key levels to be aware of:

We have definitive support between .9604 and .9562. A test and immediate rejection of this area came in earlier, confirming its validity.

The Trade: I am tempted to recommend a position long at market going into the weekend. But, next week is going to be a ferocious news cycle highlighted by the FOMC meeting and North Korea becoming active once again.

So, caution will get the best of valor. Scalping small pips by going long from the Daily SMA at .9604 is a high probability trade location. In the event that we see action pick up and drive price under the SMA, I will be looking to buy near the intraday low and play rotation back into the support zone.

As always, watch the risk and trade for tomorrow!