Forex Signals Brief for September 22nd: Are You To Sell Gold Today?

Happy Friday, traders. Though this week was quite boring due to Fomc, and most of the time the market traded sideways, but my team and I did really hard to find highly profitable signals for our members. We have extended our portfolio by introducing the trading signals of Crosses and Crypto Currencies. Do check FX Leaders New Articles on Crypto Currencies to know every possible thing about them.

Today, I'm really excited to trade some of the high-impact economic events from the United States and Canada which definitely are going to cause some serious fluctuations. Let's take a quick look at them!

The economic calendar is full of high-impact economic events from the Eurozone. At 7:00 & 7:30 (GMT), we have services and manufacturing PMI figures from the France and Germany. These figures are less likely to put any impact on Euro.

However, at 8:00 (GMT), the ECB President Draghi is due to speak at Trinity College, in Dublin. As head of the ECB, which controls short-term interest rates, he has more influence over the euro's value than any other person. Traders scrutinize his public engagements as they are often used to drop subtle clues regarding future monetary policy.

Prime Minister May is due to speak about Britain's post-Brexit relationship with the European Union, in Florence. The time of speech is tentative and probably will be released during the European session.

At 12:30 (GMT), CPI m/m and Core Retail Sales m/m are expected to release and may have some serious impact on the Canadian currencies. The CPI is also called consumer prices and it accounts for a majority of overall inflation. Inflation is important to currency valuation because rising prices lead the central bank to raise interest rates out of respect for their inflation containment mandate. Keep following, as I will share more details about Canadian crosses in my next update.

This week, gold has persistently traded bearish dropping from $1300 to $1200 trading zone, trading as we planned throughout the week.

Recall my previous updates, the FOMC statement remained Hawkish and the metal hit our target at $1297 and then $1297. The Federal Reserve's policymakers in Federal Open Market Committee (FOMC) agreed to keep its benchmark rate unchanged at 1%-1.25%, forecasting at least one more hike this year. Besides this, the FED proposed the Economic Tightening by reducing its $4.5 trillion balance sheet.

Looking at the 2-hour chart of gold, we can see it has crossed below the $1306 making it a resistance now. While It's still trading below $1298, the support becomes a resistance level.  Stochastics have entered the overbought region, signifying potential for a bearish reversal below $1301. 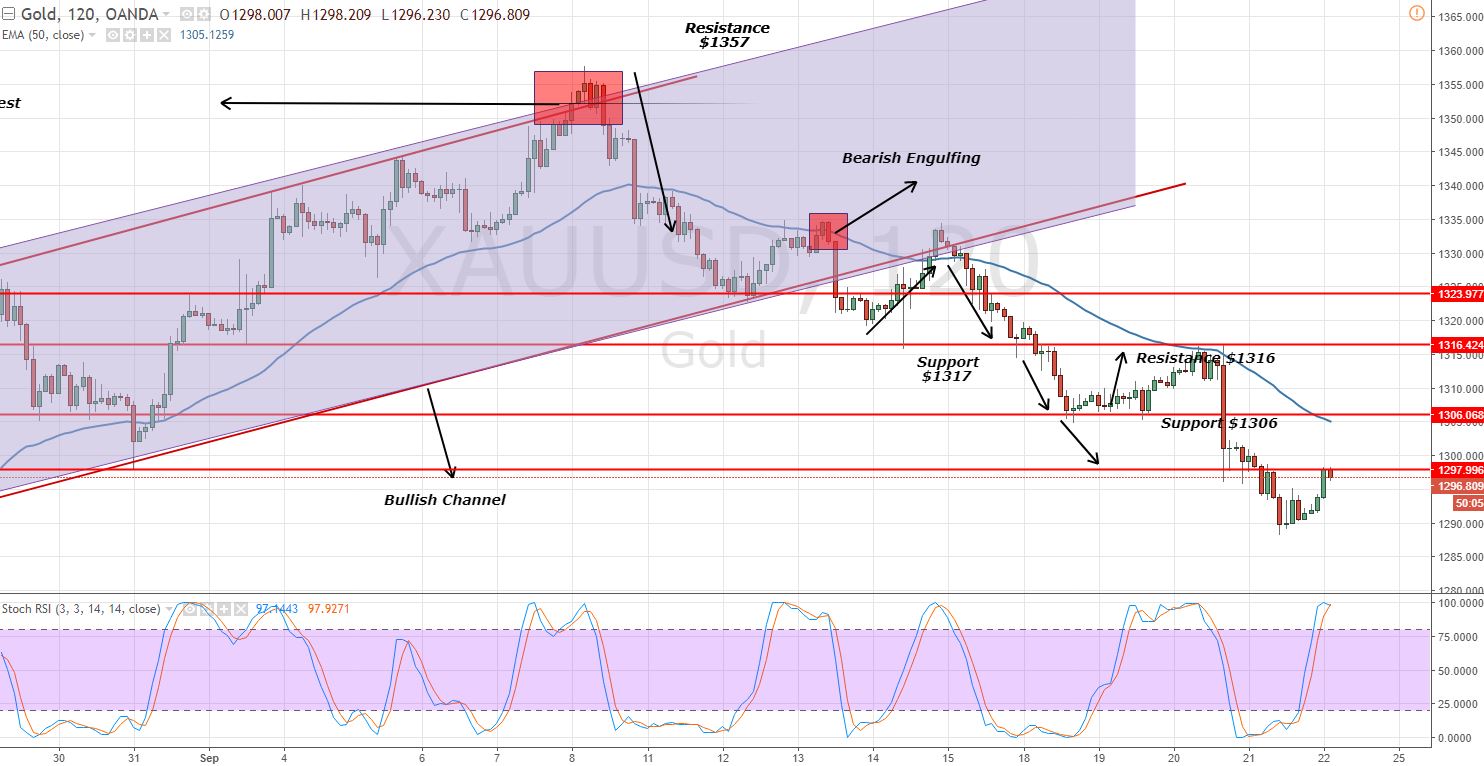 The precious metal Gold has also crossed below 50 – period moving averages, which signaling a bearish bias of investors, but as the prices are far away from the EMA, we need to wait for a retracement before taking sell positions.

Today, I'm happy to stick with the same plan of staying in sell below $1304 in order to target $1292 with a stop loss above $1306. Good luck fellows and have an awesome weekend.