The weekly inventory cycle for WTI crude is complete. As my colleague Arslan covered earlier, crude oil inventories bring considerable action to the marketplace. If there are any major discrepancies between projections and the official statistics, fundamental traders typically assert themselves into the market.

The official stats are in, so let’s take a minute and look them over.

Hurricane season has given crude oil analysts fits. Abnormal variance has been apparent in the inventories as a result of disruptions to supply and storage. Here are this week’s stats:

While the API number showed a moderate decline, the EIA inventories came in over four million barrels under projections. The immediate aftermath of the release showed WTI crude to be entering consolidation.

It is worth noting that traded volumes for November WTI crude oil futures during the half-hour following the EIA release topped 100,000. This represents an extremely high degree of market participation.

A Look At Today’s WTI Market

November WTI crude is currently trading sideways inside of Tuesday’s extremes. Are we going to stay here or is this market primed for a move? 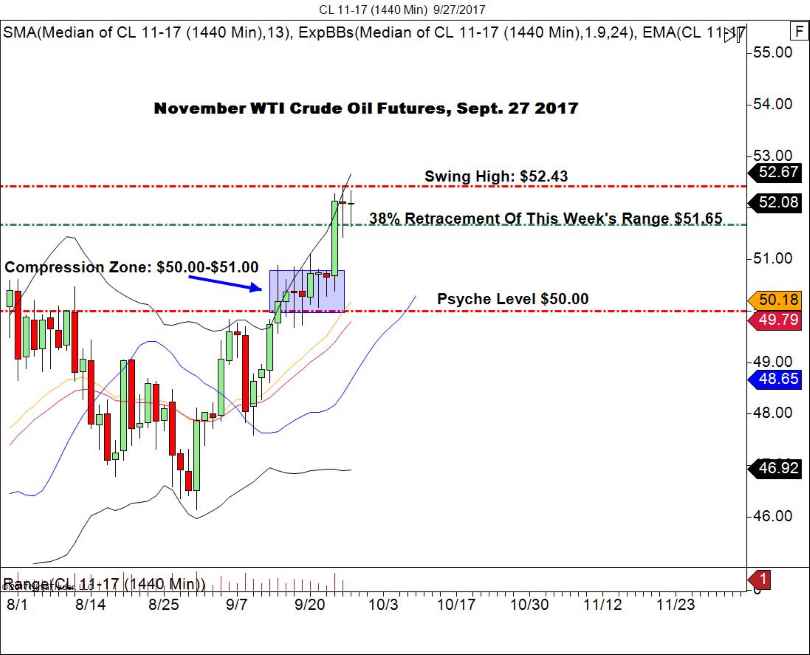 As we move towards the latter half of the trading week, there are a few levels to be aware of:

Bottom Line: With such robust participation, it looks to me as if this market is going to test a few round numbers to the topside. Without a retracement below 38% of the week’s range, my bias is certainly bullish. I will be playing  1:1 breakout scalps above the swing high of $52.43 and $52.50.

The daily range is a tight 73 ticks. I look for late U.S. session extension past the extremes.