The closing bell is rapidly approaching, and another week is almost in the books. I hope all of your accounts are firmly in the green, and that a few days of rest and relaxation will be well received. If not, next week is always the best week. Reevaluate, study the trading journal, and come out blazing Monday morning.

To say that the past five sessions have been interesting is an understatement. Pending Japanese elections, Brexit talks, and sporadic Federal Reserve rhetoric created a fluid market dynamic from Sunday to Friday.

No complaints here. Active markets beat stale ones any day.

Last weekend’s Group of 30 Summit gave the markets some food for thought. This weekend has a few items to be aware of as well:

In addition to those items, Japan’s Cabinet Office will be releasing a host of economic metrics on Sunday evening. If you are planning to hold positions in the yen, be aware of the risks involved in the news cycle.

At least we won’t be hearing much from the FED for a few days. Saturday is the beginning of the press blackout period for FOMC members ahead of the November 1 meeting.

This has been the strongest week in quite a while for the greenback. The December USD futures index daily chart lends some perspective: 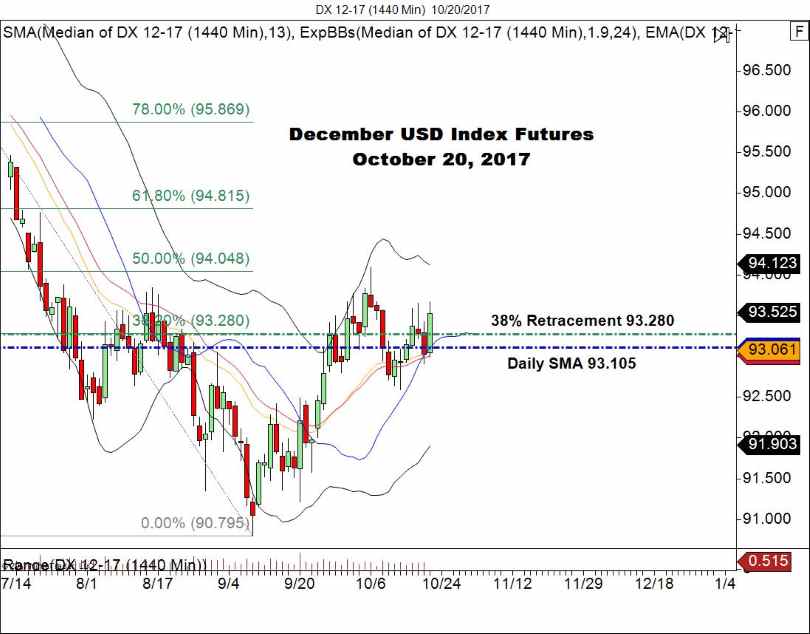 Right now, we are entering crunch time for 2017’s dollar valuation. With FED meetings looming in November and December, we could see a dramatically different USD come January 1, 2018.

Observations on the technicals:

It looks as though entry will be missed for today. Compression on the 60-minute chart produced a run to .7825 with subsequent failure. With little time to go and an active weekend news cycle, I am inclined to pull this trade. Another close-but-no-cigar entry in a week filled with near misses.

If you do leave the trade active, be aware of the risks. If elected, it will more than likely go into the close live. Be sure to have a stop loss in place to protect the trading account.

Bottom Line: It will be an interesting weekend on the news front and one I would much rather sit out. Yellen and the Japanese election have the potential to throw markets into rough waters. With so many upcoming opportunities, it is tough to justify rolling the dice and going home with open positions.

But, there is a strategy for everything. As long as risk is accounted for, then let it rip!