There Is A EUR/USD Signal On Deck- A Look At The U.S. Overnight Session - Forex News by FX Leaders

There Is A EUR/USD Signal On Deck- A Look At The U.S. Overnight Session

The EUR/USD has put on a bit of a show today, with the USD posting a 40 pip gain amid the political news out of Germany. With a new set of elections being floated as a possibility, German Chancellor Angela Merkel is going public with her disdain for governing without a majority.

Traders have taken the news as a negative facing the Euro, producing a big red candle for the session. No doubt, politics can play an integral role in currency valuations. After what has been a positive year for the Euro against the USD, the fourth quarter is primed for the greenback to recover.

Over at the signals page, there is currently a long trade facing the EUR/USD waiting to be elected. Be sure to check it out for an idea of how to become active in this market. 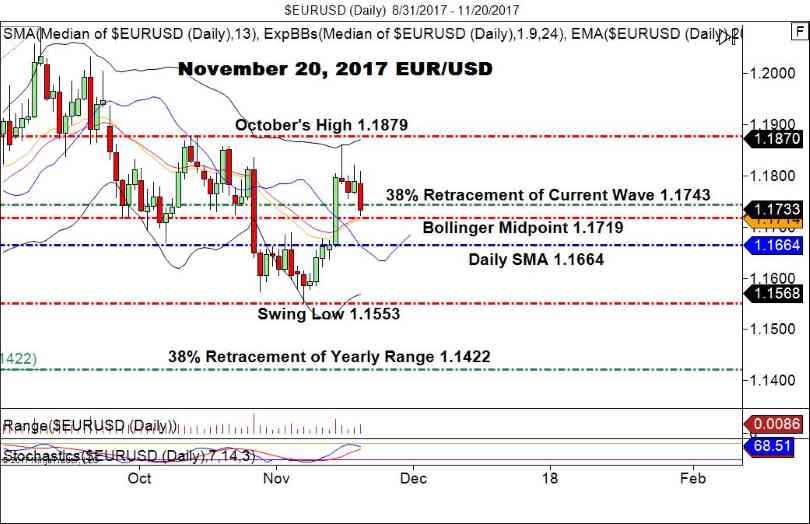 Earlier in the session, price put in a test of the Bollinger Midpoint (1.1719) and 38% retracement of the current wave (1.1743). As of this writing, we are trading in the proximity of these areas. If the bulls take control later in the session, today’s low will serve as a concrete stop out point moving forward.

In the event that price breaks beneath support, a run at the Daily SMA later this week could be in order. If this scenario unfolds, we may have premium trade location to the long. As always, stay tuned for ideas and analysis as the situation develops.

This week will be abbreviated in the U.S. due to the observance of Thanksgiving. Assorted futures markets are scheduled to offer limited trading hours, depending upon what product is being engaged. Many forex liquidity providers will be off, so participation is likely to suffer.

Here are a few events for the U.S. overnight session:

It will be a good idea to pay attention to the Chicago FED release during tomorrow’s session. As we approach the December FOMC meeting, actual FED metrics will yield more influence. If you are holding positions through this release, be sure that risk is being aggressively managed.