November Forex Draws To Close-Trading Plan For The USD/CAD

It is the final trading session of November, and “active” is the word of the day. The USD has been all over the map against the majors, creating an abundance of opportunities. If you have racked up some green pips, job well done! If performance is lagging a bit, check out the live signals page. Performance has been strong for the session, highlighted by several winners during the U.S. overnight.

The first day of December will be another active one, and possibly history making if U.S. Tax Reform passes the Senate. As I mentioned earlier, this is a fluid situation, so monitoring the wires is a must.

Aside from the U.S. Senate, here are some upcoming market movers:

The Canadian employment report and U.S. ISM numbers are poised to rock the USD/CAD for Friday’s early U.S. session. This will bring trade setups, so let’s dig into the technicals.

In a Wednesday recommendation, I outlined a trading plan for shorting the USD/CAD. Current buying pressure has brought the entry level into play. 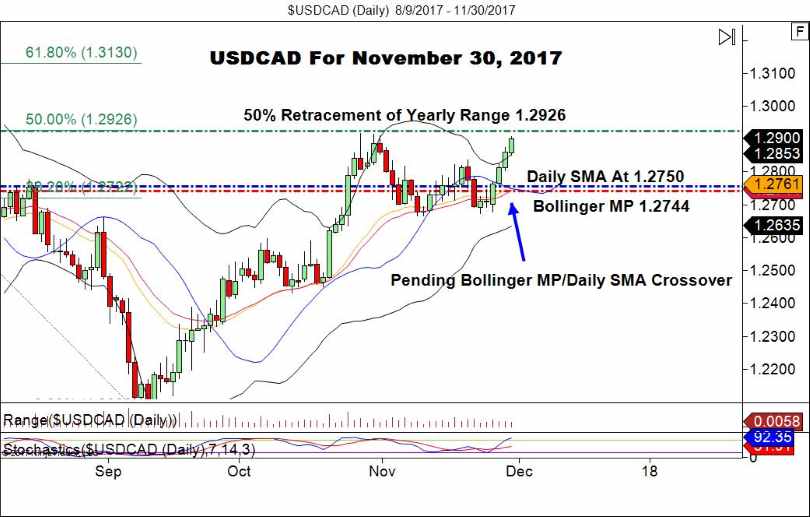 The triple top formation just under the macro 50% retracement of 2017’s range (1.2926) is currently on the horizon. With an intraday high of 1.2908, price appears curious of this area.

A few observations on this market:

Bottom Line: In trading, timing is everything. Sometimes things line up and sometimes they do not. For the rest of today’s U.S. session into the overnight, I will be going short from 1.2920 with an initial stop at 1.2955. The take profit is a modest 1:1 R/R, for a yield of 35 pips.

If this trade has not yet been elected before the Friday 8:30 AM EST Canadian Employment release, I will be pulling the orders. If the position is open, it will be exited before the release.

While the macro level is likely robust resistance, news items can run price directionally in a heartbeat. A better strategy will be to evaluate price action and develop another plan moving forward. Until then, trade smart and end November with a bang!