Well, the end of another trading week nears. It has been a memorable five-day run, kudos to all who took some money out of the market. A considerable number of economic and political events transpired, bringing an abundance of action to the majors, commodities, and indices. Next week will be even better.

Kick back and take in a ballgame!

This weekend’s economic calendar is bare. U.S. political events have the potential to shake things up, so carrying any open positions into the weekend is risky. Of course, managing risk is what trading is all about. If you are going home long or short, be sure to have your stops down and best of luck!

Trading the EUR/USD has been tricky this week. The bearish sentiment of Monday/Tuesday gave way to a late bull run. 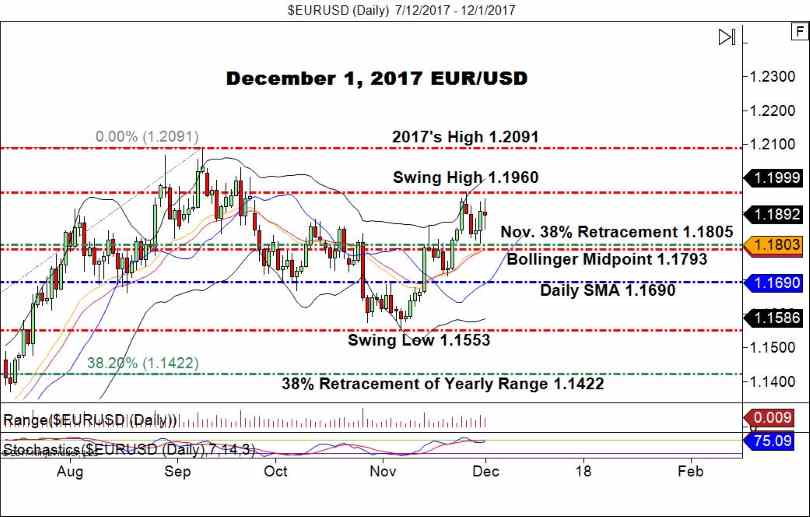 After a corrective phase for most of October, November continued the year-long uptrend. As of this writing, the EUR/USD is trading around 1.9000. Here are the key support and resistance levels:

For the last six sessions, the EUR/USD has traded sideways between the swing high of 1.1960 and November’s 38% retracement of 1.1805. The failed pullback at 1.1805 has preserved my bullish bias for now. It looks as though a test of topside resistance may be in order.

Early next week has a relatively open economic calendar, so we may receive some true price action. If things do not go haywire over the weekend, I will be looking for short entries around the swing high of 1.1960.

Enjoy the weekend! The two-day break can go by pretty fast. Get some rest and check in with my colleagues Rowan, Arslan, and Skerdian to get prepared for the coming action.