WTI Crude Oil Is On Fire-OPEC Gets Their Wish! - Forex News by FX Leaders

WTI Crude Oil Is On Fire-OPEC Gets Their Wish!

It has been a big day for WTI crude oil, rallying over $1 on heavy volumes. In the first 120 minutes of the traditional pit open at 9:00 AM EST, just under 400,000 contracts of January WTI crude have changed hands. After a muted Thursday session, January WTI is currently trading near $58.50.

Is a test of $60.00 per barrel coming in the near future? That may be the case, as OPEC decided to extend production cuts throughout 2018. The oil markets did not react yesterday to the news, but institutional money is certainly involved today.

The first day of December has been a big one thus far for crude. Today’s pronounced rally is bringing some topside psychological resistance levels into play. 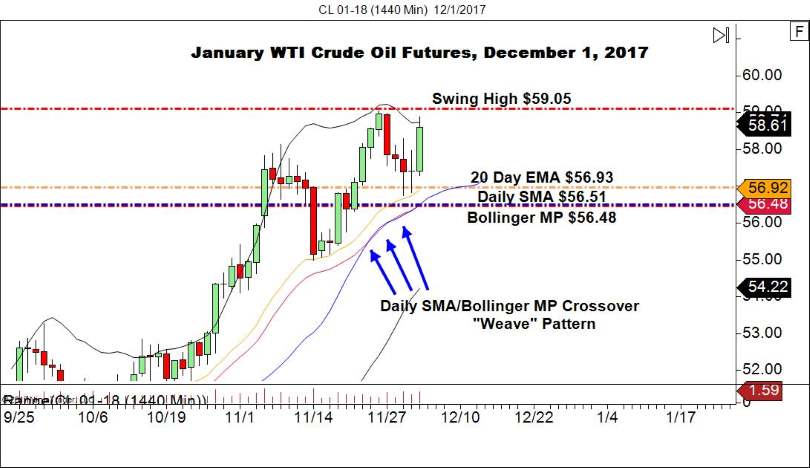 No doubt about it, this market is hot. Let’s take a look at the support and resistance levels from the daily chart:

Bottom Line: It looks as though the train has already left the station for today, and many of the best longs are already gone. For the remainder of the session, I will be looking to take tight short scalps in January WTI crude from $58.99 with an initial stop at $59.11. The profit targets will be extremely modest, looking for 7-12 ticks.

This is a counter-trend play that is risky, to say the least. If you employ this strategy be sure to use prudent leverage. Also, if price moves immediately in our favor, locking in profits or moving the stop to breakeven is not a bad idea.

We are looking for immediate and favorable price action, not a position!