Bearish Crude Oil Gets a Bounce: Downtrend is Strong

WTI Is Challenging $60.00 Amid Falling Supply.

Crude Oil saw a sell-off on Tuesday before a late reprieve helped slow down the slide.

WTI was down by more than 1% on Tuesday, before we saw a lower than expected build in US inventories from the American Petroleum Institute. For the week ending March 9, there was a moderate build of 1.156 million barrels which was less than the 2.023 million expected.

As US shale producers continue to ramp up production, the supplies of oil in the US also increase. OPEC who have traditionally been the largest supplier of oil is now facing a battle against shale producers who look to be the major players going forward.

We have also see the number of oil rigs in the US increase by 60, since the beginning of the year.

Given the downward pressure on prices, the 64.00 level appears to be about as high as I can see WTI Crude going at the moment. Even 62.00 might be a stretch.

Price is trending down nicely and the only real concern is what the USD will do. We saw some weakness on Tuesday, and there has been a number of political headlines of recent times which commodities, in general, haven’t necessarily liked.

For the time being, I’ll be looking to be short oil. And unless we get a real shortfall in inventories based on the EIA data on Wednesday, I suspect we will be looking at a break of the major support level of 60.00 in the near future. 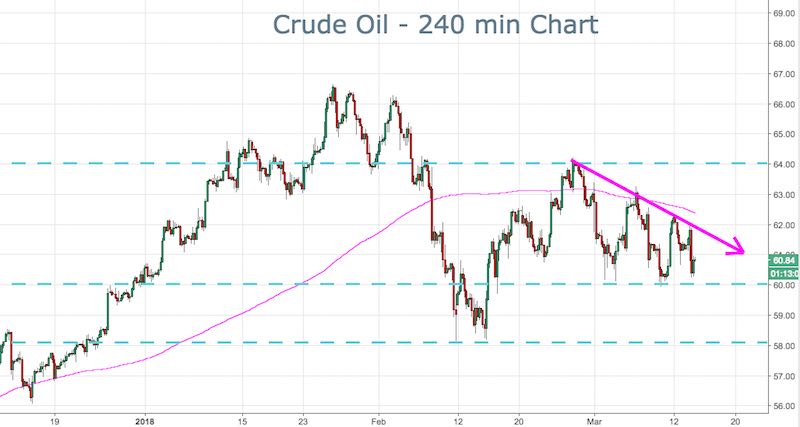