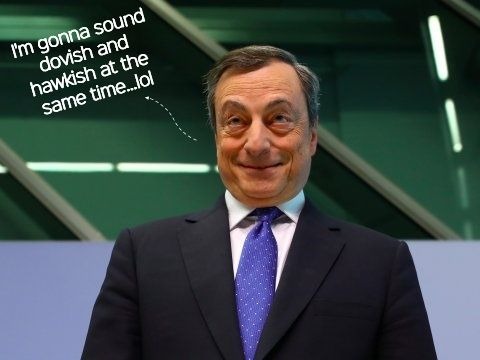 Good morning, traders. The ECB will be giving a monetary policy decision along with a presser shortly after the statement. There is, therefore, a very good opportunity that the single currency, the euro, will get a major volatility boost. If you’re thinking to trade this ECB rate decision and you’re wondering what’s expected this time, then you better read this update…

ECB Monetary Policy Event – Today, the European Central Bank will release the minimum bid rate at 11:45 (GMT) along with a press conference at 12:30 (GMT). Let’s review the previous policy meeting.

As expected, the ECB left its policy rates unchanged at:

What to Expect from the ECB Today?

The ECB is widely expected to keep the interest rate on hold at 0.00%. However, the presser by Draghi will surely move the euro. We need to see what Mario Draghi has to say about the bond-buying programs. In the previous meeting, Ewald Nowotny and Benoit Coeure hinted that they are cool with taping down their QE (Quantitative Easing) and tightening their rates a bit. But Mario Draghi is the only one opposing the tapering thing.

This morning, I was analyzing the macroeconomic events of the Eurozone and this is what I found:

Okay, all I’m seeing is the series of negative economic events, which is clearly signalling a slowdown in the economy. Do you think Mario Draghi will cut down the bond-buying program? I don’t think so.

Now let’s speak about the EUR/USD.

In my opinion, the EUR/USD is falling for two reasons:

1- Stronger dollar, for sure.

2- Market sentiments – By now, it’s logical to expect dovishness from the ECB. So, investors are selling the rumours to buy the fact. They seem to price in dovish policy, and we may see a bullish reversal in the euro if this policy meeting reveals a less dovish tone than expected. Well, let’s see what happens next. But it’s going to be really exciting to watch this movement. Good luck for today and don’t forget to apply risk management to your trading.

Get Ready to Trade EUR/JPY as this Tug of War is Coming to an End. - FX Leaders