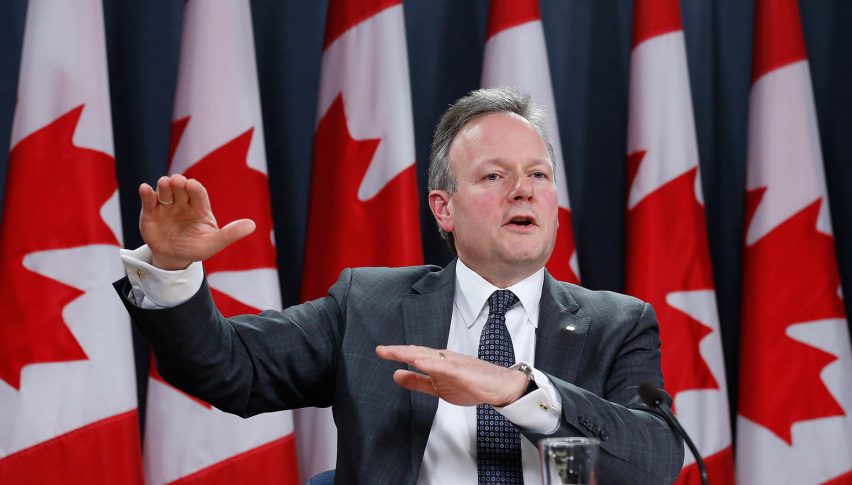 We’re in the middle of the week and so far the market has remained in flux due to the absence of economic events. It was quite hard yet exciting to trade the first two days of the week especially in the absence of quantitative fundamentals. Well, the wait is over now. The economic docket is fully loaded with market-moving economic events. Today’s main events are the monetary policy decision from the Bank of Canada, crude oil inventories and series of manufacturing & services PMI figure from the Eurozone. Let’s take a quick look at the events before we begin our trading day.

The BOC has been one of the few central banks amongst liberal economies (apart from US Federal Reserve) that’s been able to raise interest rates despite the crises and trade war. The Bank of Canada has increased rates four times since 2017 and is now expected to deliver another 0.25% rate hike today.

What are the chances of a rate hike?

Economists are very optimistic about an additional rate hike and it’s mostly due to the successful conclusion to the NAFTA renegotiation earlier in the month. Therefore, the rate hike sentiments are likely to keep the Canadian dollar supported.

What happens when BOC HIKES the Interest Rate?

So far, the Canadian dollar has remained firm against the US dollar as the market is expecting a rate hike from the Bank of Canada today. For now, if BOC actually hikes the overnight rate by 25 base points, we may see a sharp buying in the Loonie. It means we should look for a selling opportunity in the USD/CAD.

Traders,  the bearish trend can be short-lived, so I will be looking to come out of the trade as soon as possible. Or, we can also move our stop losses at the breakeven points.

What happens if BOC DOESN’T hike the Interest Rate?

In that case, we may see a dramatic buying in USD/CAD for at least 100 -200 pips in the first five minute of the news release.

PMI stands for Purchasing Managers’ Index and it’s a leading indicator of economic health. Businesses respond promptly to market conditions, and their purchasing managers carry perhaps the most current and relevant insight into the company’s view of the economy. Above 50 indicates industry expansion, below indicates contraction. Actually, the major global economies are releasing this figure well above 50, which is why it’s becoming hard for investors to understand its impact on the currency market.

French Flash Services PMI – Beside the French Manufacturing PMI, the services PMI will be observed. It’s expected to drop slightly to 54.7 vs. 54.8.

German Flash Manufacturing PMI – The data will be released right after 15 minutes of French services and manufacturing PMI at 7:30 (GMT). It’s negatively forecast and expected to drop from 53.7 to 53.5.

German Flash Services PMI – It’s scheduled with a forecast of 55.5, slightly below the previous month’s figure of 55.9.

Fellas, the market typically shows 30-50 pips movement on the release of these events, but only in the scenario when all of the economic events are one-sided. It means, either all of them are positive or all of them are negative. So, be ready for the opportunity.

The US Economic Recovery Continues, With Home Sales the Highest Since 2006
6 hours ago

The Decline Seems Over for USD/CAD, After Climbing Above the 200 SMA
7 hours ago
Comments