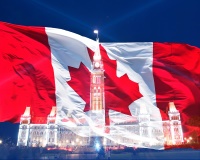 Canada Asks US Help for Diffusing Trade Crisis with China

Even as the US-China trade talks heat up, there’s another situation brewing in the North American continent with regards to China. Canada has asked the US to intervene and help settle a trade dispute with China.

Ever since Canada detained an executive from Huawei, China has been blocking imports of essential Canadian commodities in retaliation. Canada is stepping up pressure on the US, with latest reports suggesting that Canada could withhold cooperation until the US resolves this issue.

The issue dates back to December 2018 when Canada arrested the CFO of Huawei, Meng Wangzhou, on a US warrant. It escalated a few weeks ago when China stopped importing canola from Canada and suspended permits of two leading Canadian pork producers. China has also detained two Canadian citizens following Wangzhou’s arrest.

Will the Sentiment Improve As China Comes Out of Contraction?
1 week ago
CPI Inflation Steady in East Asia, Despite PPI Increasing
Producer PPI inflation is surging in China and Japan like in Europe, but consumer CPI inflation remain stable
4 weeks ago