On Friday the US dollar index fell dramatically to conclude the week in a loss on the release of worse than expected labor market reports. July’s US employment report, which revealed 164,000 jobs generated in the month and unemployment holding steady at 3.7%, just above a 50-year low.

Overall, this employment report is fine but not spectacular. Job growth continued to be moderate and presently it’s less than three-quarters of what it was on average at this point last year. The dollar index slipped 0.30% from 98.40 to 98 in the back of worse than expected NFP.

On Monday, the market is very much likely to trade US dollar with a bearish sentiment until we have another fundamental to “price in”. In this update, I’m going to share the top 5 economic events that are worth watching during the week ahead.

On Monday, the services PMI data from the dominant UK services sector will be released. A reading above 50.0 indicates economic expansion, but opinions are divided as to whether that can be accomplished. Having come in at 50.2 in June, there’s a real risk that the print could turn negative as the ongoing political uncertainty continues to undermine confidence.

This would help as a major setback for any hopes that the UK economy can manage to find growth in the third quarter of the year, with any shortfall likely to hit the Pound hard. A figure of 50.4 is listed on the cards.

The Institute for Supply Management is due to release services PMI figures at 14:00 GMT with a forecast of 55.5 vs. 55.1. Newbies, it’s a survey of about 400 purchasing managers which asks respondents to rate the relative level of business conditions including employment, production, new orders, prices, supplier deliveries, and inventories.

The positive forecast may keep the US dollar supported, but worse than expected labor market report will still be keeping the dollar under pressure.

Investors will be monitoring the RBA (Reserve Bank of Australia) interest rate decision at 4:30 GMT. Back in June, the RBA lowered the interest rate by 25 base points for the second time in 2019.

However, the RBA is widely expected to keep the interest rates on hold in the wake of a trade truce between the US and China, Australia’s largest trading partner.

The Aussie may remain supported as no rate cut sentiment is considered hawkish in nature. However, a more bullish scenario may arise for the Australian dollar should the RBA keep the benchmark interest rate at 1%.

Phillip Lowe will likely continue asserting the concept that the high value of the currency burdens on reaching the inflation goal. Any change in the tone may move the Aussie. But expectations are very low for any kind of move led by a change in monetary.

RBA’s remarks on lifting short-term funding costs, trade wars and the fresh drop in iron ore rates will be watched.

The RBNZ will have responded to recent trade tensions and the Fed’s rate cut, as well as some domestic concerns. As per economists’ forecast and the market sentiments, the RBNZ is expected to cut the interest rates to 1.25% vs. 1.50% beforehand.

The RBNZ Press Conference is also due at 3:00 GMT, and I hope that RBNZ Governor Graeme Wheeler will speak up about his future policy actions.

Chinese Trade Balance figure is due on Friday, however, the source does not have a reliable release schedule. This event is typically listed with a date range or as ‘Tentative’ until the data is released.

A positive number indicates that more goods were exported than imported. China usually has a trade surplus due to its weaker currency, but this month’s figure is likely to report a slower trade surplus than before. Economists are expecting a trade surplus of 310B vs. 345B beforehand, which may keep stock markets weaker.

Fellas, the failure to reach a trade deal with the United States, and infliction of another 10% tariffs of Chinese goods may place a negative impact on next month’s trade balance.

On Friday, the UK’s Office for National Statistics is due to release Gross Domestic Product (GDP) report for the full second quarter of the year. Since it’s a quarterly figure, it’s considered more impactful than the monthly releases.

The British economy has grown by a robust pace of 0.5% in the first quarter of 2019 – but this growth was essentially driven by arrangements for Brexit – that did not occur at the original March 29th date.

Second quarter’s economic events have shown a significant slowdown and some worry that the economy has experienced from contraction – unlocking the door to a recession. The pound and also the euro may be impacted by the data. Therefore, economists are expecting GDP figures to drop to 0.1% this month. The pound may face headwinds this week. 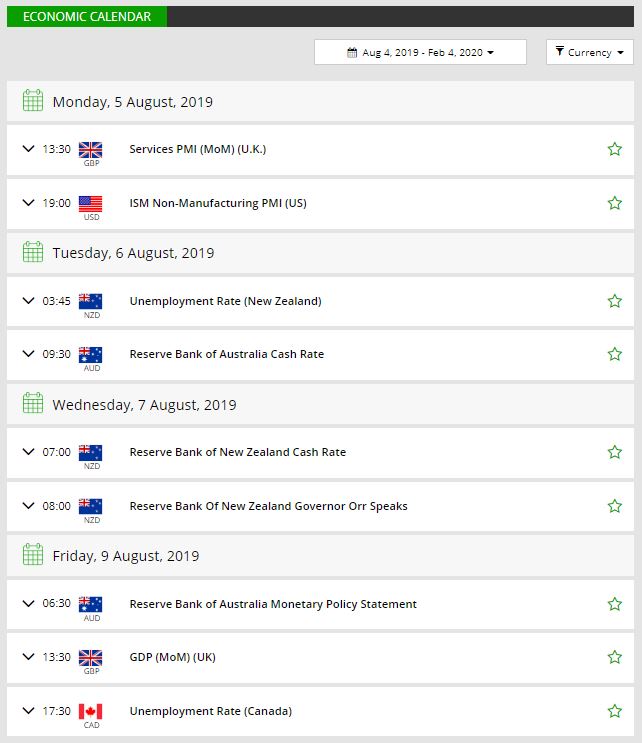 Forex Signals Brief for May 7: US Employment in Focus
5 hours ago