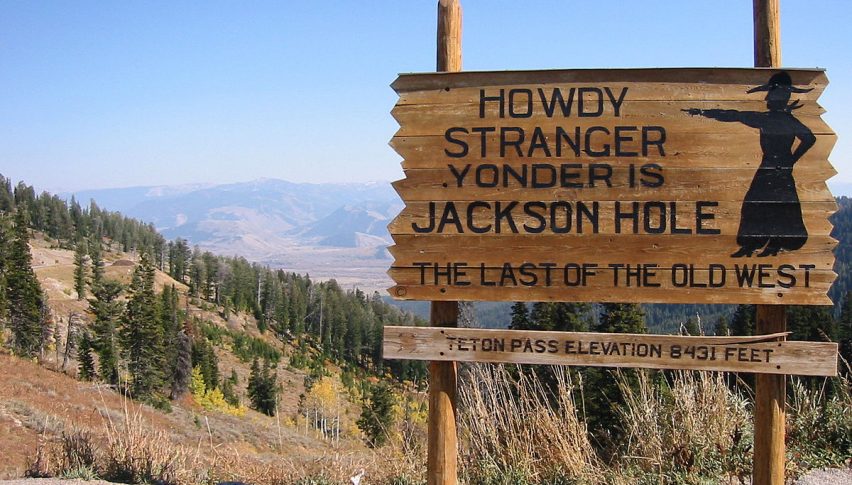 The greenback ended the week lower against the euro, the Japanese yen, and the Swiss franc as investors turned to riskier assets. While the stability in Chinese yuan helped improve the risk appetite, GOLD continues to trade choppy in the wake of mixed fundamentals and summer’s lack of volatility.

Looking ahead into the coming week, the summer calm is likely to continue as the economic calendar will remain sparse.

Nevertheless, the series of manufacturing and services PMI, along with central bank minutes, and an annual gathering of central bankers at the Jackson Hole Economic Symposium can drive plenty of headlines to keep the markets on move. Besides, the trade and geopolitical tensions will also remain in focus, and we need to keep an eye on any developments to determine risk levels in the market.

Eurostat is due to release European inflation rate on Monday. The CPI data shows a change in the price of goods and services purchased by consumers. Whereas, the consumer prices account for a majority of overall inflation. Inflation is important for currency valuation because rising prices lead the central bank to raise interest rates out of respect for their inflation containment mandate. We are expecting final CPI and final core CPI figures.

The annual inflation rate in the Euro Area is anticipated to drop to 1.1% in July of 2019 vs. 1.3% in the previous month. This may keep Euro weaker considering that it’s the lowest inflation rate since February last year, mainly due to a slowdown in cost of energy and services.

On the other hand, the core CPI in the Eurozone, which eliminates volatile values of energy, food, alcohol & tobacco and at which the European Central Bank looks in its policy conclusions, is expected to slip to 0.9% in July from 1.1% in the prior month.

Historically, the core inflation rate in the Eurozone averaged 1.40% from 1997 until 2019, touching an all-time high of 2.60% in March of 2002 and a record low of 0.60% in January of 2015. With the negative forecast, traders may hesitate to take buying position in Euro, unless Eurozone reports surprisingly high inflation numbers.

Due to the lack of stats on Tuesday, the Reserve Bank of Australia will leave the traders to concentrate on the RBA meeting minutes that are due at 1:30 GMT.

After having a more hawkish than anticipated RBA Rate Statement, traders will be eyeing any evidence of a near-term rate cut. This year 2019, the RBA has delivered two consecutive interest rate cuts, while any talk of keeping the rate unchanged or steady would extend support to the Aussie Dollar.

Statistics Canada will be releasing the inflation rate for the Canadian dollar. The yearly inflation rate in Canada declined to 2% in June of 2019 from 2.4% in the prior month and in line with market forecasts, as costs decreased for defense and transportation while energy prices declined further.

The FOMC meeting minutes of the July policy meeting will be eyed as traders will be expecting them to emit more light on the prospects of the two dissenting members that voted against a rate cut in July. At the end of the week, Fed Chair Powell is scheduled to speak, who may shed some color on what’s to come.

The Economic Policy Symposium, held in Jackson Hole, Wyoming, is attended by central bankers, finance ministers, academics, and financial market participants from around the world. The meetings are closed to the press but officials usually talk with reporters throughout the day. Comments and speeches from central bankers and other influential officials can create significant market volatility.

Updates from the Symposium on Thursday and Friday will need monitoring. 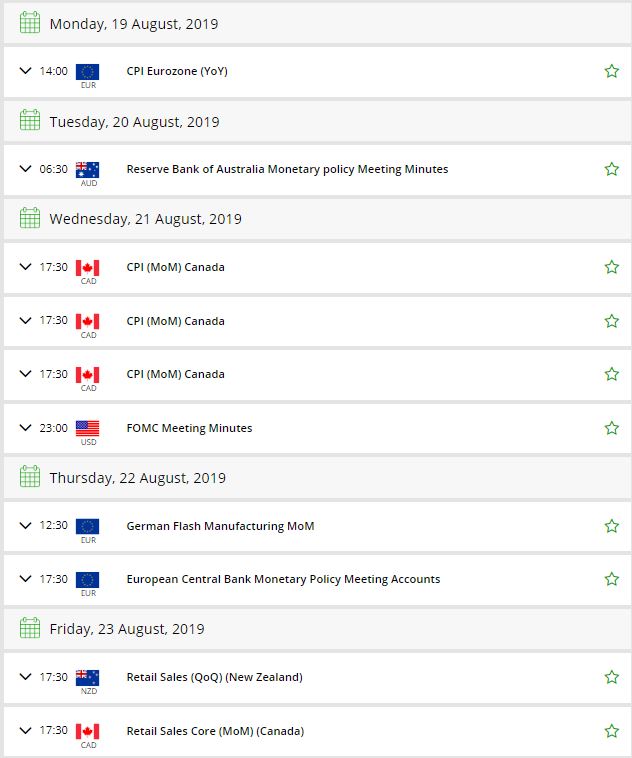