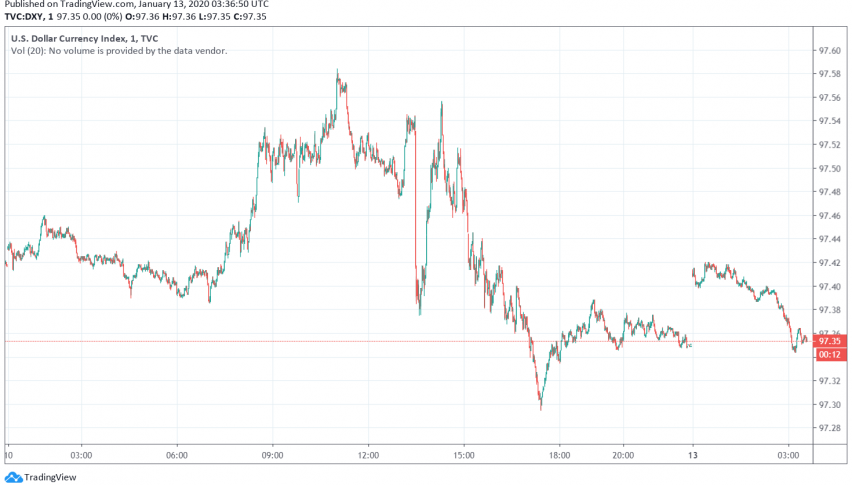 At the start of a fresh week, the US dollar is trading somewhat steady as the phase one trade deal gets ready for signing this week, signaling a possible improvement in US-China trade relations in the coming days. At the time of writing, the US dollar index DXY is trading around 97.35.

US and Chinese trade teams are all set to sign the phase one trade agreement on Wednesday at the White House, following which US President Trump is expected to travel to Beijing to officially begin the second phase of trade negotiations between the two world leaders. Markets remain optimistic that this progress could help resolve the trade war that has raged on for around 18 months.

However, gains in the US dollar are somewhat controlled by ongoing geopolitical tensions in the Middle East as tensions between the US and Iran continue to simmer. Although both countries hinted at not escalating their military conflict any further, Iran bombed another Iraqi military base on Sunday where US troops were stationed.

For now, the dollar has regained some of its losses after it slid lower on Friday following the release of a weaker than expected US NFP report.

Check out our free forex signals
Follow the top economic events on FX Leaders economic calendar
Trade better, discover more Forex Trading Strategies
Related Articles
What's Left for the USD Until the End of 2022?
The USD has been showing weakness in the last several weeks, as the data shows increased economic weakness
5 days ago
Has the USD Retreat Has Come to An End As DXY Reaches the 200 SMA?
The USD has been retreating in the last few weeks, but the retreat might be over with the DXY finding support at the 200 daily SMA
2 weeks ago