Daily Brief, Jan 22: Everything You Need to Know About Gold Today - Forex News by FX Leaders

Daily Brief, Jan 22: Everything You Need to Know About Gold Today

On Wednesday, the focus will remain on the Canadian inflation data, which is expected to have performed better during the previous month. We don’t have any other significant economic event which could impact the market heavily. Therefore, we should focus on technical levels.

GOLD in the early session rose to its highest since 8 January to above $1568 amid the outbreak of coronavirus in China. The US dollar fell on Tuesday when reports came in about the first case of the deadly coronavirus in the United States.

The virus was first identified in the Wuhan city of China, which gradually spread across its major cities, including Beijing and Shanghai. Almost 291 cases have been reported as patients of coronavirus until now, and 9 have been reported dead because of it.

China’s National Health Commission confirmed that this virus could be transmitted from human to human. In response, the World Health Organization (WHO) declared an international public health emergency over the coronavirus.

The US Centers for Disease Control and Prevention on Tuesday announced the first case of coronavirus reported in the United States. In China, the virus has already spread, and precautionary measures are being taken to avoid further spreading. This has raised the fears that a widespread outbreak could hurt economic growth and disrupt tourism.

The outbreak of coronavirus gave a push to the risk-off sentiment, and hence, gold prices surged to a two week high. However, gold prices started to fall when reports came in that due to a viral outbreak in China, the physical demand for gold dropped. China is the biggest gold buyer in the world, and at the time of the peak holiday period, a viral outbreak in China has pressured the demand for gold.

Before the Lunar New Year, many people like to travel in China, and the coronavirus spread has increased the chances that this year the number of travelers would decrease. Tourism, air travel, and other industries are being affected by this contagious disease, which impose economic risks to China.

A number of countries have already adopted precautionary measures to avoid their global outbreak. The screening of travelers, especially from China, has started in many countries. There were also reports that North Korea has temporarily closed its borders for foreign tourists in response to a virus outbreak.

The fall in gold prices was also because of the return of US traders in financial markets after a long weekend. There was still no economic data to be released from America on Tuesday so, US traders re-entered the market and closed their previous positions, which also dragged the prices of gold on Tuesday, ending day with a bearish candle. 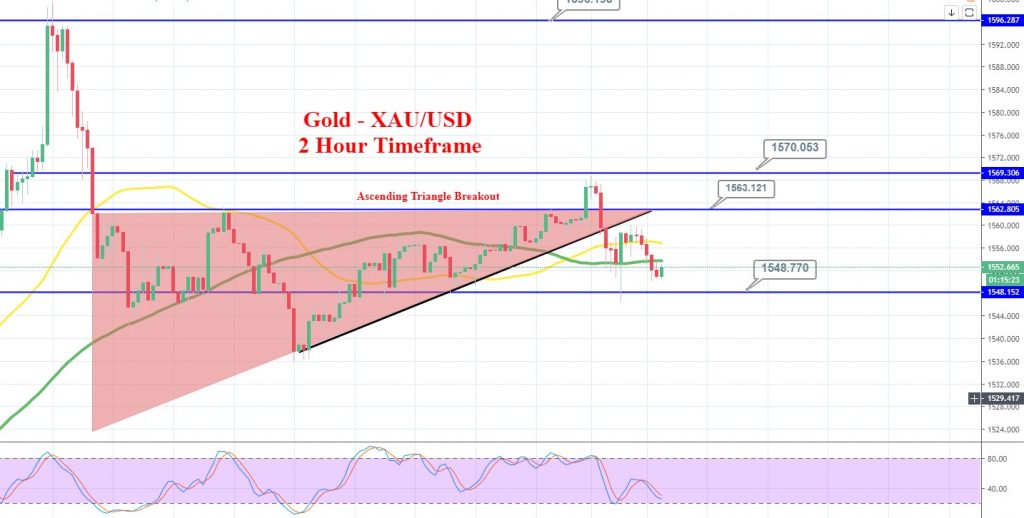 Gold is trading sideways in a broad trading range of 1,566 – 1,549. On the 4-hour timeframe, it has formed a bearish engulfing candle, which has increased the bearish sentiment for gold. Currently, it’s trading at 1,552 with immediate support around 1,549. Violation of this level can help drive more selling in gold. Gold is likely to maintain bearish sentiment today below 1,557 trading level, whereas gold may go after 1,542 on violation of 1,549 level.