WTI Crude Oil Back to Bearish Over Mounting Concerns on Coronavirus, Unexpected Rise in US Crude Inventories - Forex News by FX Leaders 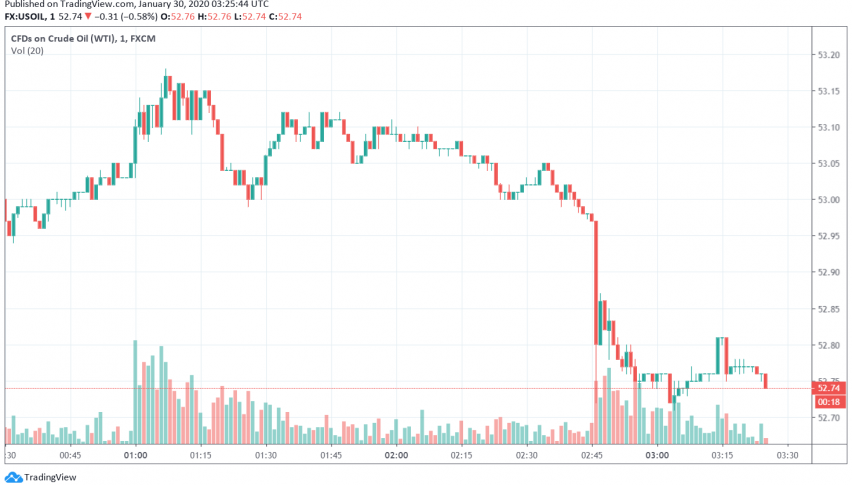 WTI Crude Oil Back to Bearish Over Mounting Concerns on Coronavirus, Unexpected Rise in US Crude Inventories

WTI crude oil prices are weakening again early on Thursday as concerns about the coronavirus outbreak come back into the spotlight and dominate the overall market sentiment. At the time of writing, WTI crude oil is trading at around $52.74 per barrel.

As the death toll and the number of infected people climb higher in China, more countries around the world are canceling flights to and from China, which is likely to send demand for oil lower. Crude oil prices have fallen to the lowest levels in three months as leading airlines suspend or cut down the frequency of flights to major cities in China, even as governments issue travel advisories requesting passengers to avoid travel to China.

There is significant uncertainty on the extent of potential economic damage that the outbreak could cause as China enforces more lockdown measures, restricting travel, shutting down factories and more in order to contain the spread of the virus. The WHO is set to meet later today to decide on whether to term the coronavirus outbreak a global emergency, and its decision will cause major moves in global markets.

Crude oil prices have also declined following the release of the EIA report in the previous session which revealed a massive gain in US crude stockpiles. According to the EIA, crude inventories in the US increased by 3.5 million barrels to 431.7 million barrels, far higher than the 500k barrel increase economists had previously forecast.

Will WTI Oil Break Below $70 This Time?
2 days ago