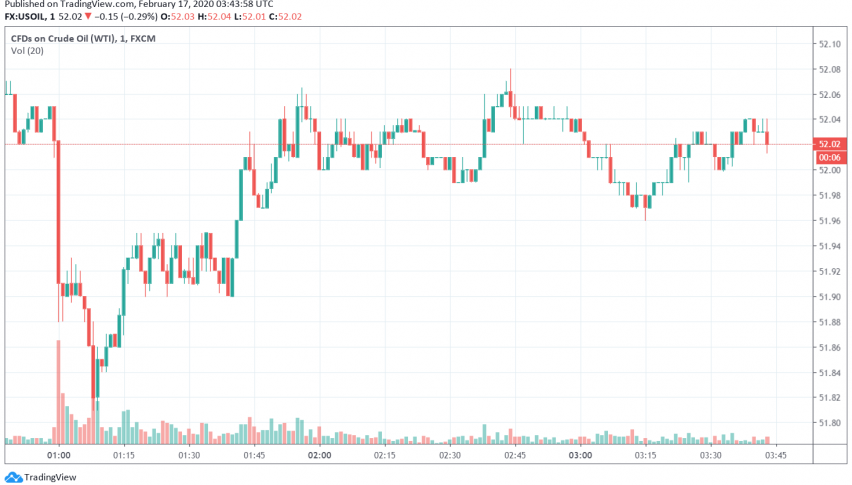 At the start of a brand new trading week, WTI crude oil prices half slipped lower in anticipation of economic data releases from Asia that could reveal the impact of the coronavirus outbreak and how much it has weighed on oil demand in the region. At the time of writing, WTI crude oil is trading at around $52.02 per barrel.

During the previous week, WTI crude oil had gained around 3.4%, marking the first weekly gain since early last month when it was bullish on account of escalating geopolitical tensions in the Middle East. Despite the coronavirus fears, crude oil had traded bullish in the past few sessions over rising expectations of OPEC cutting oil supply further while hopes that China will be able to contain the spread of the virus also helped support the sentiment.

However, analysts and organisations have already forecast a decline in oil demand growth especially in the initial months of this year on account of the outbreak. Flash manufacturing PMI data releasing across Asia this week will remain and focus among oil traders to get a clearer picture on changes in demand and will weigh on crude oil prices.

In addition, traders will also focus on updates from OPEC on whether the group and its allies will agree to enforce deeper crude production curbs. A technical committee of OPEC+ officials has recommended additional supply cuts of around 600k bpd, in addition to the already prevalent 2.1 million bpd curbs.

Will WTI Oil Break Below $70 This Time?
2 days ago