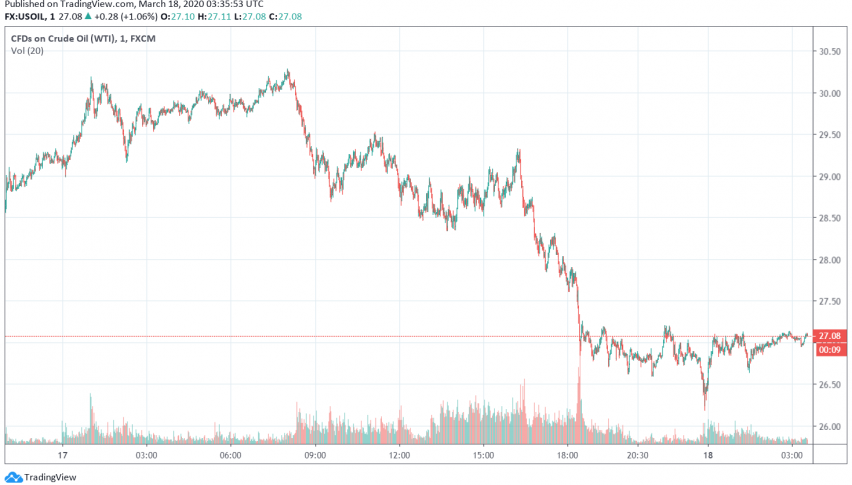 WTI crude oil prices are trading somewhat steady early on Wednesday after falling to four-year lows during the previous session over mounting concerns about the coronavirus pandemic depressing demand even as Saudi Arabia goes ahead with increasing crude production. At the time of writing, WTI crude oil is trading at around $27.09 per barrel.

Markets remain worried that the continued rise of coronavirus cases worldwide will further reduce the demand for crude oil, on account of the travel restrictions and shutdowns being implemented in several countries. Even though leading governments and central banks have announced stimulus measures, the risk of a recession in the global economy remains high, exerting downward pressure on crude oil prices.

On Tuesday, WTI crude oil prices received some support after the API report revealed a decline in US crude inventories during the previous week. According to the API report, crude stockpiles in the US fell by 421k barrels while economists were expecting a build of 2.93 million barrels for the period instead.

To calm down tensions between Saudi Arabia and Russia as they head towards a price war, Iraqi oil minister urged OPEC and non-OPEC countries to agree to an emergency meeting to discuss ways to balance the oil market amid weakening demand. So far, calls for such a meeting have failed to make any headway, however.