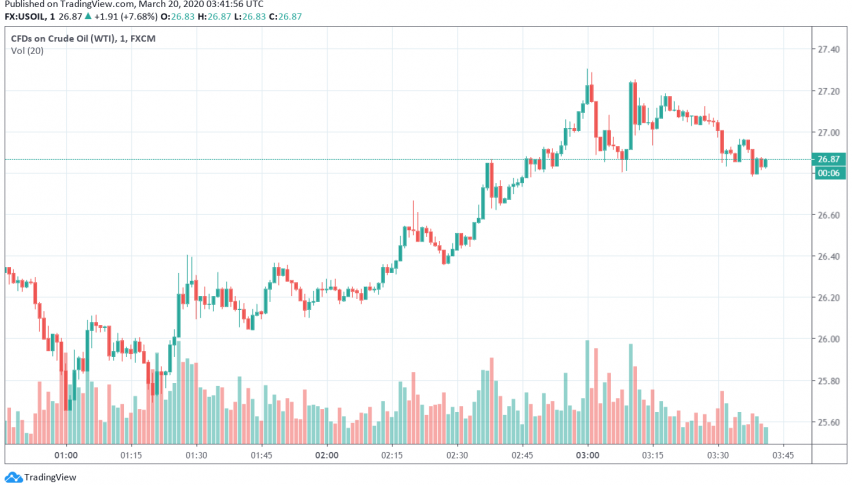 Early on Friday, WTI crude oil prices have made some gains after US President Donald Trump hinted at a possible intervention to resolve the price war between Saudi Arabia and Russia, which had sent prices crashing recently. At the time of writing, WTI crude oil is trading at around $26.87 per barrel.

According to a report on the Wall Street Journal, the US is considering the use of diplomatic pressure to convince Saudi Arabia to put off its plans and explore the possibility of imposing sanctions on Russia towards complying with OPEC’s proposal instead. If it succeeds in doing so, the US will have helped eliminate the possibility of a supply glut in oil markets at a time when demand continues to weaken on account of the coronavirus crisis worldwide.

Over the past couple of weeks, both US oil as well as UK Brent oil have lost around 40% of their value amid escalating worries of the coronavirus pandemic depressing oil demand severely even as Saudi Arabia announced its intention to increase crude production starting April. Saudi Arabia’s decision came after Russia refused to go along with OPEC’s recommendation for deeper supply cuts to offset weakness in demand.

Notwithstanding this slight spike, WTI crude oil is all set to post a weekly decline of around 16% so far this week, weakening to the lowest level seen since 2003. However, WTI oil prices also received some support from the US government’s plans to fill up their strategic oil reserves, a move which could boost demand at least momentarily.