Today in the early Asian session, the safe haven metal prices were flashing red and dropped from two week highs to stay below the $1,650 level, mainly due to recovery in the equity market. Earlier, gold prices got some support from the broad-based US Dollar weakness.

Gold is currently trading at 1,633.90 and consolidates in the range between 1,631.10 and 1,647.20. Although, the intensifying coronavirus headlines remain in focus because the US took the lead in the list of cases.

Despite today’s losses, gold prices still rose sharply this week, representing over 8% gain so far and all set for their biggest weekly gain in over a decade mainly due to the total number of coronavirus cases across the world continued to increase.

Before the early losses today, the yellow metal prices got some support over safe haven demand overnight and gained about 1% after the downbeat Labor Department data, which reported a record 3.28 million jobless claims, beating the forecast for 1.5 million by a big margin.

The US dollar index dropped to multi-days low on Thursday due to intensifying fears of coronavirus outbreak. As per the latest report, the United States cases crossed China figures of more than 81,000 virus cases and reached on the top of the list. On the other hand, the UK reported the highest single-day rise in the death toll by 103 to 578 yesterday.

On the flip side, the US Senate passed a $2.0 trillion relief package to control the virus on Thursday. The bill is now at the door of the House of Representatives from where it will be able to reach the President’s desk and be the law.

Apart from the US, the European leaders also showed agreeability on a massive stimulus package while central banks in Australia and New Zealand kept infusing the markets with liquidity while performing the previously announced Quantitative Easing (QE).

Looking forward, today’s voting in the House of Representatives could offer some drama to watch regarding the disappointment among the Democrats; there seem fewer hurdles in the bill to be a law. It should also be noted that the Federal Reserve Chair Jerome Powell earlier signaled that the central bank still has major resources left. 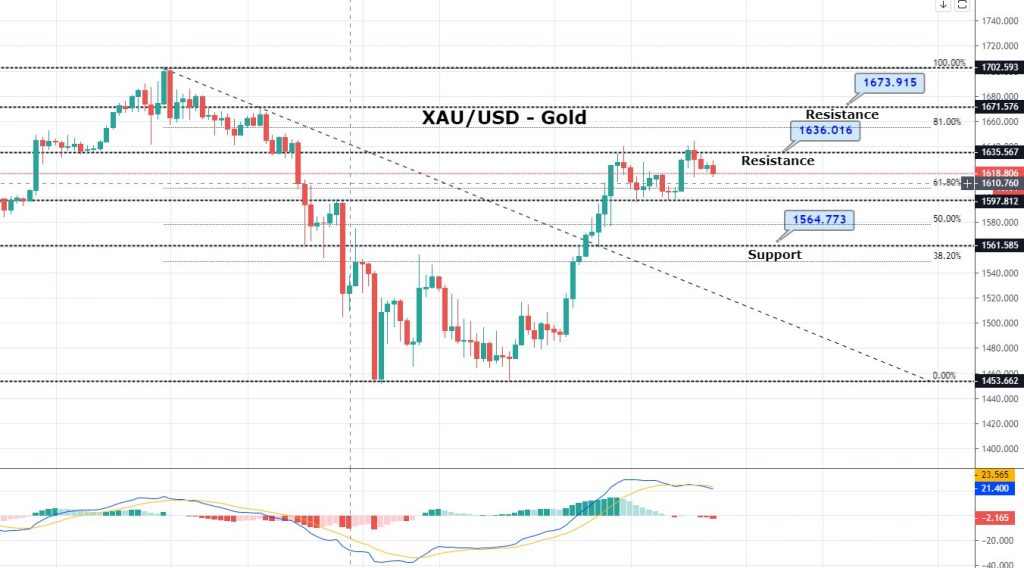 On Friday, the precious metal GOLD is likely to find immediate support around 1,623, and above this, the next resistance is likely to be found around 1,631 and 1,643. Conversely, the bearish breakout of 1,623 levels can lead to gold prices towards the next support level of 1,615 and 1,607. Odds of bullish trend continuation remain high due to safe haven appeal in the market.

Trading XAU/USD: Everything You Should Know About Gold Today
17 hours ago

Selling the Jump in Gold, After GM Announcement
3 days ago